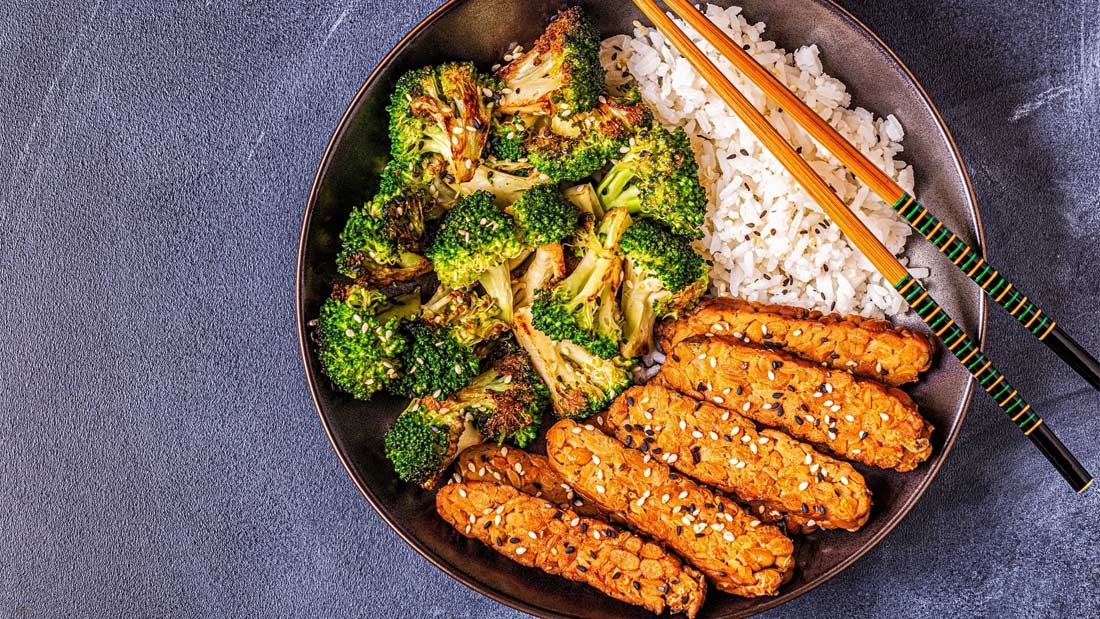 A firm favourite of plant-based and Asian diets, tempeh is a nutritional powerhouse that tastes great – what’s not to like?

Tempeh is made by a controlled fermentation of soya beans that binds them together in a cake-like form. The process involves soaking the beans for several hours, cooking them and letting them ferment with a fungus called Rhizopus oligosporus. Fermentation is complete within about 48 hours and the result is soft soybeans bound together by layers of white mycelium from the fungus. This cake-like mass of tempeh is then cut, usually into oblongs, and can be added as an ingredient to dishes or is further processed to add flavour – by marinating, smoking or frying.

Where did it come from?

Tempeh is a traditional Indonesian food and its history spans several centuries at least. It was allegedly discovered by mistake when some leftover soya beans were infected by a mould and the result turned out to be not just edible but also a delicious and nutritious food.

Because tempeh production uses whole soya beans, nothing is left out – all the nutrients from the beans remain in tempeh. That’s why it’s such a good source of protein, healthy fats, carbohydrates, fibre, B vitamins, iron, calcium, magnesium and some other minerals.

The protein in tempeh is high quality and there’s more of it than in many other plant-based foods with a 100 g serving containing around 20 g of protein!

The fungus releases enzymes, fermenting the beans and breaking down some of the carbohydrates making them easier to digest. At the same time, the process also breaks down phytic acid that reduces the absorption of minerals, such as iron or calcium. As a result, tempeh has low levels of phytic acid, allowing more of these minerals to be absorbed – and that’s why tempeh is easy on the digestive system and extra nutritious!

Traditionally, tempeh contains beneficial bacteria – probiotics – that are a part of the ‘fungus starter’ used to ferment soya beans. These bacteria may also produce vitamin B12, which is the reason why there is some confusion about tempeh and B12. However, most commercial tempeh is made only with the fungus and not the starter, and is also pasteurised so there are none of these bacteria left – which is why it’s not a source of B12. Even if there were some bacteria remaining, tempeh is cooked before eating and the high temperatures would destroy them anyway.

Despite this, there is a bacterial benefit to tempeh; it is an excellent source of fibre and complex carbohydrates – also known as prebiotics – and your gut bacteria love them. So, even though tempeh doesn’t provide any good bacteria, it feeds those you already have in your gut and helps them thrive.

Isoflavones are natural compounds found in soya and other plant foods. They have a multitude of health effects, such as lowering your blood cholesterol levels, reducing your risk of hormone-sensitive cancers and defending your cells and DNA from damage by acting as antioxidants. They may also have a slightly positive effect on your bones, helping to prevent age-related bone loss.

At one point, isoflavones received a bad reputation due to flawed scientific studies on animals but rest assured, they are absolutely safe and beneficial to our health.

The many types of tempeh

You may have noticed that the tempeh available in health food shops looks either very white or very dark. These different colours indicate the two different stages of tempeh’s readiness to be eaten. The white stuff has finished its fermentation process but still needs to be cooked and flavoured to be edible and taste good. It’s sometimes called raw tempeh and its advantage is that you can marinate it in just about anything and it will absorb the flavour. The disadvantage is that you’ll have to cook it thoroughly so its preparation takes longer.

Dark tempeh carries a label that tells you how it’s been processed – usually smoked, marinated and cooked or fried. It is ready to eat but you can, of course, still cook with it or you can simply slice it and use it as it is, perhaps in sandwiches.

There are many other types of tempeh, including those made from beans other than soya beans or even grains but they’re not very common and few shops stock them.

How to tell if tempeh has gone off

When you bring tempeh home, always refrigerate it. Because it naturally contains mould, sometimes it looks a bit dodgy and you may be unsure whether it’s good to eat or gone off. The key signs to look out for are smell and consistency. If it smells mushroomy and is firm, then it’s good to eat. It may develop a greyish tint or darker spots but don’t worry, that’s still fine!

If, on the other hand, it develops an acidic smell and becomes limp, something’s gone wrong. It doesn’t happen often but different moulds and bacteria can infect tempeh and start growing there, making it dangerous to eat.

Tempeh may not be available in every supermarket yet but it’s worth a trip to a heath food shop to buy some. It offers countless health benefits, nourishes your body with many essential nutrients and is easy to digest.

It can be used in almost any savoury dish – diced, sliced, grated or crumbled – turned into tempeh bacon, burgers or filling for a wrap. If you’re not sure about its taste at first, give it another go as I’m sure it will win you over in the end!