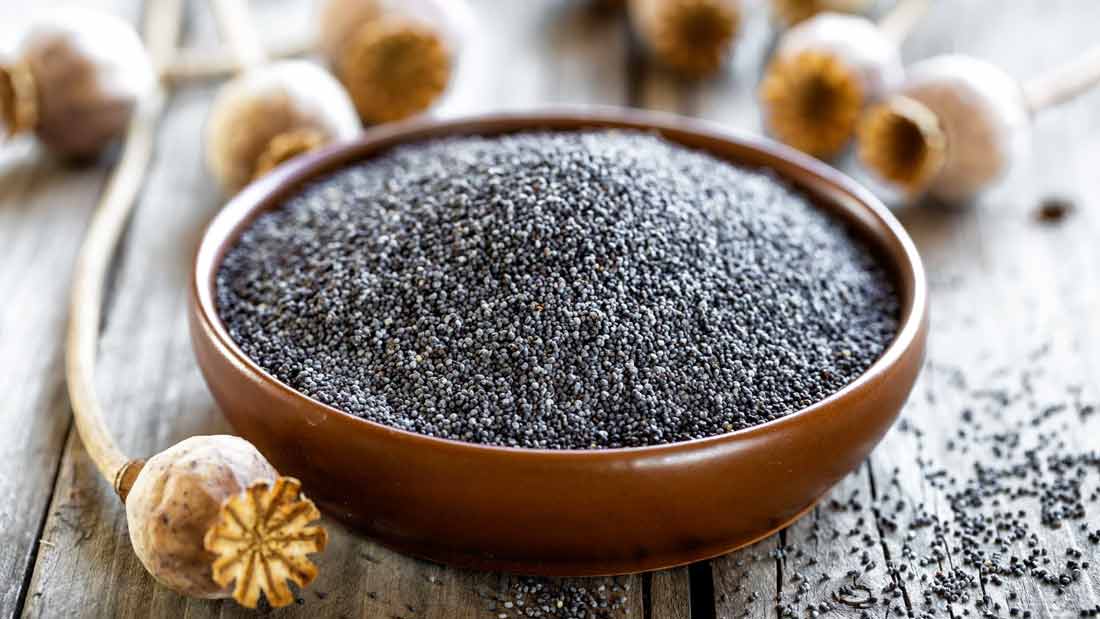 Loved by many, yet feared by others – should you be wary of poppy seeds or feast freely?

These seeds are amazingly high in calcium, with just one tablespoon containing 126 milligrams – the recommended daily intake is 700 milligrams. Problem is, it’s estimated that we absorb only between eight and 15 per cent of poppy seeds’ calcium because they also contain compounds that inhibit its availability. If you soak and cook or bake them – think poppy seed cake, pastries or savoury dishes – it increases the calcium availability but exact figures aren’t known. In short, poppy seeds can provide a good calcium boost but are not as rich as some believe.

Poppy seeds also contain good amounts of other important minerals, such as iron, magnesium, manganese and zinc. On top of that, they’re a great protein source, with just one tablespoon providing 1.6 grams – and offer some valuable fibre and unsaturated fats.

The dark blueish colour of poppy seeds means they contain powerful antioxidants called polyphenols which help to protect your tissues and DNA from damage and support your immune system.

In a nutshell, poppy seeds are full of important nutrients and are certainly worth adding to your diet!

What’s the fuss about poppy opioids?

Poppy plants contain the opium alkaloids morphine, codeine and thebaine known for their pain-relieving and sleep-inducing abilities. Manufacturers use the sap of the poppy plant to make drugs such as heroin, morphine and oxycodone which are all highly addictive and dangerous.

Poppy seeds don’t contain any of these opioids but they can become contaminated during harvesting or processing because the poppy pod is rich in the opioid sap, also called poppy latex. It’s why poppy seeds are usually washed before being packed and sold for human consumption.

People sometimes sell their home-grown poppy seeds, which may be unwashed and contain higher levels of opioids but it’s rare. It certainly wouldn’t apply to poppy seeds available in regular shops so you don’t have to worry.

Just be cautious of teas made with poppy seeds and marketed as ‘calming’ as they may contain some of the opioids and it’s easy to accidentally ingest a high dose. They may also cause an addiction so it’s best to steer clear of them. They are not (or shouldn’t be) available in the UK but you can come across them while travelling.

How much is definitely safe?

If you are still worried about possible contamination and accidently eating too much, here’s what experts say. They recommend that people limit the amount of raw poppy seeds they eat to about one tablespoon per seven pounds of body weight. In practice, it means that if you weigh 150 pounds, or 70 kilograms, eating seven tablespoons of raw poppy seeds daily is safe. Cooking doesn’t change the volume of poppy seeds, so this guidance would apply for cooked seeds too. Unless you eat poppy seeds several times a day, it would be hard to achieve the intake of several tablespoons daily, so you don’t have to worry.

How to use poppy seeds

The tiny seeds are very versatile but many of us are unsure of how to use them. Try a layer of poppy seeds as a crunchy topping on bread, bread rolls and bagels. Stir them into dough for cakes and muffins, make savoury crackers with them or throw a spoonful in a curry or salad dressing.

If you’re feeling more adventurous, soak them and then grind into a paste in a food processor.  It makes a wonderful sweet pastry filling – simply mix the paste with sugar, a little corn starch and a splash of water, then bring to boil briefly until it thickens. You can also add raisins or chopped prunes for extra sweetness. This mixture can be used as a filling in cakes, pastries or strudels, and it makes a nice topping on a tray bake. Soaking the seeds beforehand also increases the calcium availability so it’s a win-win!

Who should avoid poppy seeds?

As a precaution, athletes should avoid eating anything with poppy seeds a few days before and during a competition so as to avoid any possibility of drug tests showing trace amounts of codeine and morphine in your urine.

Also, don’t give poppy seeds to babies and toddlers. The old folk remedy of poppy seeds boiled in milk to pacify a crying baby may result in accidentally overdosing your baby. Even though washed poppy seeds may only contain trace amounts of opioids, it may be enough to affect a small child.

Poppy seeds as a staple

There’s no need to be wary of eating a poppy seed bagel or muffin in case it makes you high or sleepy because that’s not going to happen. Poppy seeds have been and still are a part of many cultures and are traditionally consumed without side effects in much larger quantities than what we eat in a slice of bread. They provide many essential and valuable nutrients and taste delicious, which is why they’re so popular. Poppy seeds have helped to boost people’s nutrient intake for millennia and nutrition science is only just beginning to appreciate their value.

Several countries grow a so-called non-opium poppy variety that is always safe as it has been bred to produce almost no opioids in the sap. The largest producer of poppy seeds is the Czech Republic and they grow this variety exclusively so there’s no risk of the seeds containing opioid residues. If you want to be sure, check the origin of poppy seeds you are buying.

Truth is, there’s no need to worry about poppy seed bakery products so enjoy them freely – daily if you like!