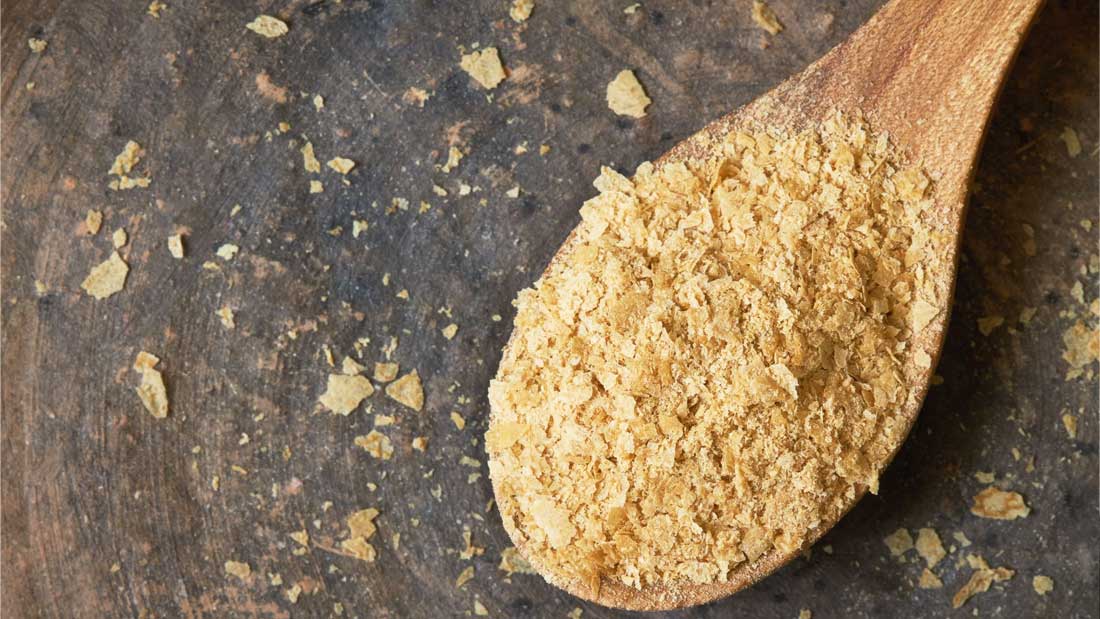 It is an inactive form of the yeast Saccharomyces cerevisiae, the same strain of yeast as used in baking and brewing but inactivated with heat so it’s no longer alive.

The yeast is grown in vats of molasses – providing sugar – and water. As long as it is supplied with plenty of sugar, the yeast will grow, digesting the sugar and releasing carbon dioxide and ethanol. This same yeast reaction is used in bread-making, where it helps the dough to rise, and in beer and wine production, where it turns sugar into alcohol. Once the yeast has grown and is considered mature, it is separated from the liquid, spread out on a conveyor belt, exposed to heat that inactivates it, then dried and broken down. The end result are those little flakes you already know – or if you don’t, perhaps you should!

What does it offer?

Nutritional yeast is a B-vitamin goldmine. We need the B group vitamins to be able to absorb and process energy, protein and fats from food as they are essential to cell growth, healthy skin, nerve function and red blood cell production. Nooch is naturally rich in all B vitamins, apart from B12, which is produced by bacteria (see table for an overview). Each commercial product has a different content of B vitamins because the manufacturing process and conditions vary. However, all of them are a good source of B vitamins and all contain iron, fibre and protein.

Yeast protein contains all nine essential amino acids, making it a protein champion. Adding one tablespoon to your meal will add 3-4 grams of protein – not bad for a few delicious flakes!

The fibre in nutritional yeast contains beta-glucans, natural components of yeast cell walls, which are pretty special in that they stimulate your immune system and strengthen it against bacterial, viral, fungal or parasitic infections by priming your white blood cells (the immune system soldiers) and making them more effective. Beta-glucans have also been shown to have anticancer properties, they help regulate blood sugar levels and can lower cholesterol – especially important for those at risk of heart disease. On top of all this, they make the friendly bacteria in your intestines thrive and although we don’t usually eat nutritional yeast for its fibre, it is an added benefit.

Many nutritional yeast products are fortified with vitamin B12 so that you get the complete B vitamin spectrum. Vitamin B12 is produced by bacteria and is widespread in the environment but commercially, it is also grown in vats so is readily available and easy to add to the yeast before final processing. It integrates into the yeast mixture and becomes a natural part of the flakes. Some people rely on nutritional yeast for their B12 intake – if that’s you, always check the packaging to see if you’re buying the fortified variety. One tablespoon provides the recommended daily dose (1.5-4 micrograms) but it’s been suggested that we should take as much as 50 micrograms of B12 a day as we don’t absorb all we eat. That would be hard to achieve with nutritional yeast alone so it’s best to take a supplement and use nutritional yeast just as a neat top up.

How does yeast extract compare nutritionally with nutritional yeast? It also starts off as a yeast growing in a vat or sometimes leftover brewery yeast is used but the process by which it’s made is different. The liquid yeast mass is heated, which causes the yeast cell walls to break down and release enzymes that then digest the broken cell walls, producing tasty compounds that we love (or hate) as a result. The mixture is then processed to produce a concentrated extract.

Yeast extracts usually have vitamin B12 added and the next step is seasoning, which includes larger or smaller amounts of salt. Traditionally, yeast extracts are very high in salt although there are low-sodium varieties on the market.

According to available data, yeast extract contains several but not all B vitamins so in this aspect it is inferior to nutritional yeast, particularly to the B12 fortified variety. It also has less fibre and protein and considerably more salt so while it may be tasty, it’s not a winner.

How to use nutritional yeast

With its distinctive cheesy taste, nutritional yeast is the perfect companion to any savoury meal – sprinkle it on pasta, risotto, roast potatoes (before or after roasting); stir into soups, spreads and sauces; or make a popcorn seasoning from it by simply mixing it with a little olive oil and tossing popcorn in it. If you’d like an easy parmesan topping, mix equal parts nutritional yeast and ground almonds and add salt to taste. Don’t be scared to experiment with nooch – stick with savoury foods and you can’t go wrong!