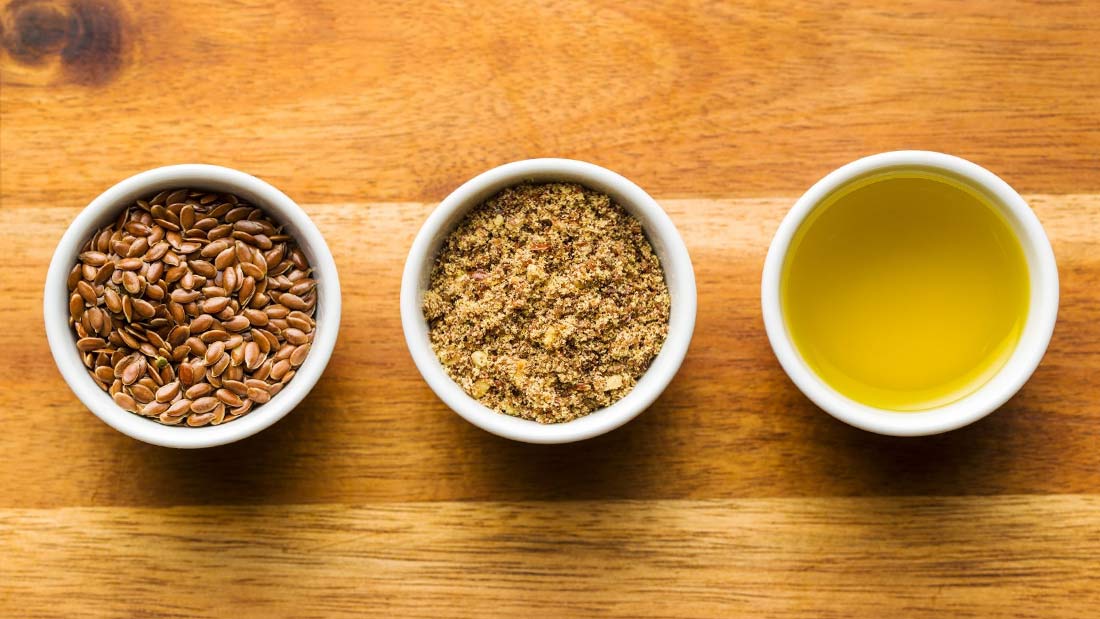 The flax plant has been cultivated for millennia – as far back as 30,000 years according to the records! People have grown flax for its seeds and fibres all over Europe, Asia and North Africa before introducing it to North America. The flax fibre is spun into linen, a natural and sustainable fabric, while the seeds have multiple culinary uses and are pressed for oil extraction. Flaxseed (also called linseed) oil is edible and nutritious but has also been extensively used in wood varnishing and as pigment binder in oil paints.

This extraordinary seed contains high amounts of omega-3 fat – alpha-linolenic acid (ALA) – in fact, flaxseed is the richest plant source of omega-3s there is.

Why do we need omega-3s? For healthy brain function, cell membranes and healthy blood vessels – they’re pretty important. A regular intake is not just necessary for these reasons, it also has anti-inflammatory properties and some of the beneficial effects of flaxseed on heart health have been credited to its omega-3s.

A great habit to cultivate is to have two tablespoons of ground flaxseed daily – enough to cover your daily omega-3 needs. Just remember, it can be destroyed by heat so should be added either to cold meals, such as morning cereal or smoothie, or to meals after they’ve been cooked in order to preserve its nutritional qualities.

Flaxseed contains a wealth of antioxidants and among them, lignans are the most potent. This humble seed contains 75 to 800 times more lignans than other plant foods and its ability to reduce blood pressure, cholesterol and blood sugar are ascribed to these extraordinary antioxidants. They may also make your blood vessels healthier because they are anti-inflammatory so helping to soothe the irritation caused by everyday damage.

Lignans are fermented by bacteria in your gut, which produces several beneficial compounds as a result. These have been linked to a lower risk of several cancers, especially hormone-sensitive types such as breast, uterus and prostate cancer.

Just like all seeds, flaxseed is an excellent source of fibre. However, unlike many other seeds, it contains substantial amounts of soluble fibre that naturally absorbs water. The result is a gel which, in your digestive system, slows down digestion and delays hunger. However, in a kitchen bowl it produces an excellent egg replacer for baking! By slowing down food absorption in the gut, soluble fibre helps to regulate blood sugar and cholesterol levels and, lower down in your large intestine, it feeds your good gut bacteria.

The insoluble fibre from flaxseed is also useful because it attracts water into your stool, making it softer and easier to pass, with less strain on your bowel. In a nutshell, insoluble fibre helps to promote bowel health and regularity.

Flaxseed has particularly positive effects on your heart health. Studies show that daily consumption of flaxseed or flaxseed oil may lower overall cholesterol by 6-11 per cent and LDL ‘bad’ cholesterol by 9-18 per cent! This cholesterol-lowering effect is thought to be caused by the high fibre and lignan content in flaxseed. These substances bind with cholesterol-rich bile acids in the intestine so you excrete them in your stools and this helps to reduce cholesterol levels.

Regular flaxseed intake is also known to decrease blood pressure in people who already suffer from artery narrowing – and this is attributed to the beneficial effect of the fibre and anti-inflammatory omega-3s it contains.

Several studies have revealed that flaxseed consumption may offer some protection against breast cancer. The science has shown that it could reduce tumour growth in women with breast cancer and reduce mortality in cancer patients. It also found evidence that flaxseed reduces the risk of breast cancer developing in the first place. These effects were observed with 25 gram doses of milled flaxseed – about two heaped tablespoons.

Back to the lignans that flaxseed contains and the enterolactone that its metabolism produces. Studies of postmenopausal breast cancer patients have reported an association between higher blood concentrations of enterolactone and a reduced risk of breast cancer with better treatment and survival outcomes in those who already have it. Other studies agree and reveal that enterolactone seems to offer some degree of protection against cancers of the breast, colon, prostate, gut and lungs.

There are two varieties of flaxseed – brown and golden and they have very similar nutritional qualities except that the brown variety contains slightly more antioxidants.

Whole flaxseeds are very stable and keep well but their tough skin prevents absorption of their nutrients in the body, which is why we should always consume them ground or milled. It follows that when the seeds’ protective skins are broken down it leaves the oils at risk of becoming rancid when exposed to the air. At room temperature, this can happen in as little as a week. It’s best to store ground flaxseed in an airtight container in the fridge – and the same applies to flaxseed oil. Ground flaxseed is commonly available in the shops, so make sure to refrigerate it as soon as you bring it home.

It’s not recommended that you cook with flaxseed to as heat will destroy its precious omega-3s – but there does seem to be one exception. According to one study, if you use milled flaxseed in baking, its nutrients do not degrade if the oven temperature remains below 178℃ and baking time is no more than two hours.

Flaxseed is such a nutritious gem that it’s certainly worth making it a part of your daily routine. Remember, two tablespoons daily and always ground! Add it to cereal, stir into soups and sauces once they’re cooked, sprinkle over rice dishes or salads or blend with fruit and plant milk into a rich smoothie.

Who should approach flaxseed with caution?

Flaxseed may have slight blood-thinning effects so if you already take any medication for it or are preparing for an operation, you may have to lower your daily dose – check with your doctor.

Pregnant women are advised to not take high doses of flaxseed – one tablespoon daily should be a safe dose but skip flaxseed oil.

And a word of caution – if you eat more than three tablespoons of flaxseed daily, your bathroom visits may become more frequent as it has a slight laxative effect in higher doses.