Home » Blog » VIVA!’S NATIONWIDE DAY OF ACTION – OUR MOST SUCCESSFUL YET!

VIVA!’S NATIONWIDE DAY OF ACTION – OUR MOST SUCCESSFUL YET! 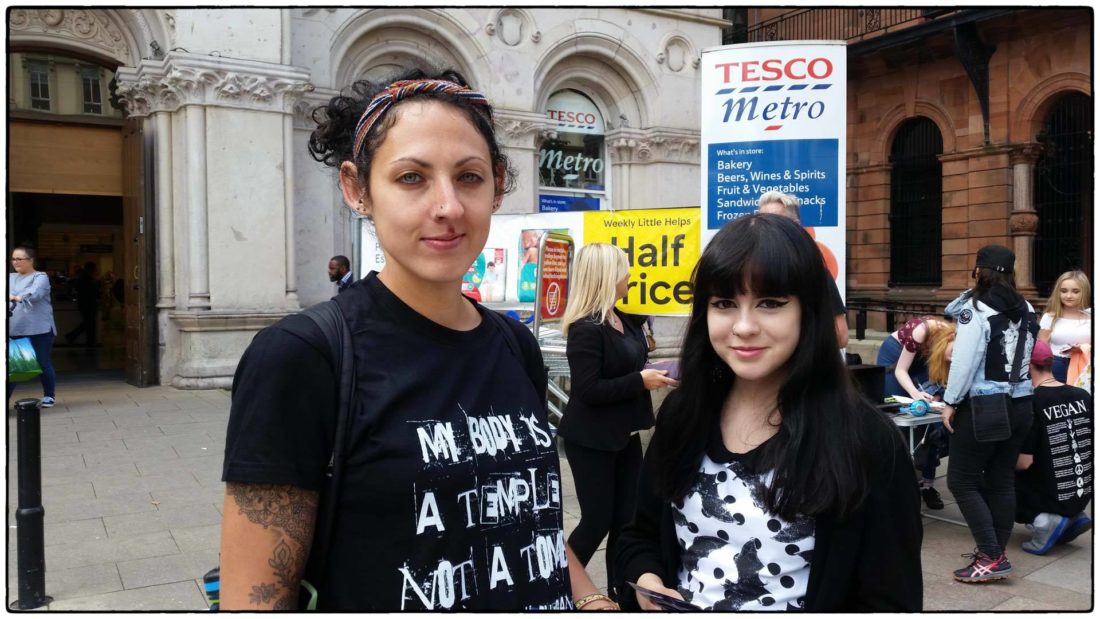 A staggering 600 people ordered Tesco door dropper and demo packs. Viva! kick started the weekend with a photo call outside Tesco in Bristol which was covered by The Bristol Post and Plant-Based News, reaching several thousands of people.

On the Day of Action itself, Viva!’s founder and director, Juliet Gellatley, joined the Bristol Animal Save Tesco demo to show footage from inside Hogwood Farm and speak to Tesco store manager. She asked him to end Tesco’s partnership with Hogwood, and pass on the request to Tesco Headquarters. I also traveled to a central London on the day to attend an event at Tesco organised by Ray Williams from Warwickshire Animal Save. The dedicated campaigners there – some of whom had traveled as far as Birmingham and Kent – took the Viva! Tesco leaflets to a second event that day against hunting!

Reports flooded in on the day of events right taking place across the country – in England, Scotland, Wales and even Northern Ireland! Compassionate individuals door dropped and handed out leaflets in their droves, and local groups created Facebook events which were shared to thousands of people across social media. The message to Tesco – DROP Hogwood Farm – could not be ignored.

In central London, another event took place at Hammersmith. Campaigners  reported a really positive response from shoppers”. Just outside of London, in Braintree, Essex, the Tesco staff and manager were welcoming and sympathetic.

In the Midlands, the effective and active Lincoln Animal Rights held a last minute demo which received a fantastic response from the public. In Walsall, local campaigners said they had “lots of interest’ as they handed out information and showed images of Hogwood. Here, they even obtained local media and so the message against factory farming reached an even wider audience.

Further north, in Leeds, Leeds Animal Action had an “amazing” day with much “public support”. Plenty of people also signed our petition to get Tesco to ditch the farm. Manchester Animal Action said: “There was one moment when a bus stopped in front of us and one of the passengers stood up, opened a window and put his arm out for a leaflet .. so he got one!”

In Wigan, four campaigners said that there was “a lot of interest” and many leaflets were handed out. This group will be door dropping the remaining leaflets in their local community.

Saturday was also a big day for Viva! as we held our Liverpool Vegan Festival. Our campaigns team spent the afternoon talking to festival-goers about Hogwood, and Liverpool campaigners organised a demo after the festival at Tesco in the town centre. We were so happy to see these dedicated people campaigning and there was also local media coverage!

Back in the south West of England, in Hereford, three compassionate supporters gave out over 200 leaflets and were featured in the Hereford Times. In Poole, campaigners reported: “Petition sheets full, nothing but positive reactions from members of the public, many of whom had already heard about the campaign. This goes to show how much effect we are having! Lee from the Tesco management team came out to us for a chat, and was very keen to hear the grizzly facts about Hogwood”.

In Norwich (if that isn’t pig farming country, what is?!), the Thetford & Brandon Times, interviewed local campaigner, Hazel Evans about the event: “It is to make people aware of factory farms – that they are cruel and the animals all end up in horrific slaughterhouses. If people are upset by what they are seeing, and if they want to take a stand against it, the only other way is to eliminate all animal products from their diet”. She added: “It is just to get people thinking about of how we treat animals in our society”. Another campaigner, Charlotte, said: “Great news! I have calculated the signatures and the donations we received today in Norwich, and it seems we got an amazing total of £55.81 and 80 signatures! … we got such positive feedback and so many carnists were interested!”.

Thousands of Viva! Tesco leaflets were handed out around the country on the Day of Action. Even a small campaigns team in Peterborough managed to distribute over 500 leaflets!

View IMAGES of events across the country.

In Bedfordshire, at the Tesco Express, campaigners chatted to the public. Elsewhere in the South – in Oxford, Hove and Seaford – Tesco stores received visits from campaigners. Many of whom spoke positively to younger shoppers who wanted to learn more. A Cambridge demo, organised by Animal Rights Cambridge, was attended by perhaps our youngest protestor– Una, aged four! Another young protestor was at the Bristol demo – Anna, aged seven!

This is a good opportunity to give a big shout out to possibly our oldest campaigner – Brian Lamb, aged 80. He sat outside Tesco in Mid-Glamorgan, handing out leaflets and talking to the public. Thank you so much, Brian!

Campaigners in the south of England, in Croydon, held an effective and powerful silent protest and vegan outreach. They’ve ordered a second batch of leaflets and plan to keep the pressure firmly on!

Outside of England, in Northern Ireland, we received some fantastic photographs after the Day of Action of the fabulous Vegan Action Northern Ireland and V-Kind campaigners stood in a line outside their local Tesco armed with laptops and leaflets! They received “lots of signatures” but have still more to come, as they’ll be heading out next week for another action-packed day at Tesco!

The Isle of Wight wasn’t forgotten and campaigners from the fantastic Vegan Animal Action IOW Community got active for Hogwood pigs. We received a great report from them: “The feedback from the public driving up and down the high street was truly amazing and we had sounds of whoop, whoop and horn honking – great motivators for us all. We could see that people were inquisitive and wanted to know more and were willing to wind down their windows while the traffic moved slowly to take a leaflet. Passers-by along with shoppers to this Tesco store also wanted to find out more and came over to read the literature and were more than willing to sign the Viva petition. Some pledging to take literature home and share it with family and friends in a bid to get them to also sign on-line. A great story from a woman who drove by and saw what we were demonstrating about and went home, googled Hogwood Horror Farm and then came back to sign our petition!”. Incredible outreach and effort guys!

In Wales there were at least FIVE different events happening – Swansea, Cardiff, Welshpool, Mid-Glamorgan and Pontypool. In Swansea, we were thanked: “Thank you Viva! we had such a positive response and so many signatures”. In Welshpool, one campaigner said: “The manager allowed us to stand outside the store and we had a lot of interest with many people engaging positively with us”.

This is just a snapshot of all the incredible events that took place across the country! A huge thank you to everyone who took part, and to everyone who cares so deeply about the pigs suffering in dire conditions inside Hogwood Pig Farm. It is heartening from us, and in particular our investigators, who bore witness to the suffering.

We are going to continue fighting against the abuse of animals inside Hogwood Farm, and we want you to join us! We’ve ordered a fresh new batch of Tesco leaflets, so to order visit www.viva.org.uk/hogwood and sign the new petition asking Tesco to stop buying from Hogwood!

View IMAGES of events across the country in our Facebook album.

To stop the suffering, try vegan. For the animals, everywhere.

About the author
Viva!