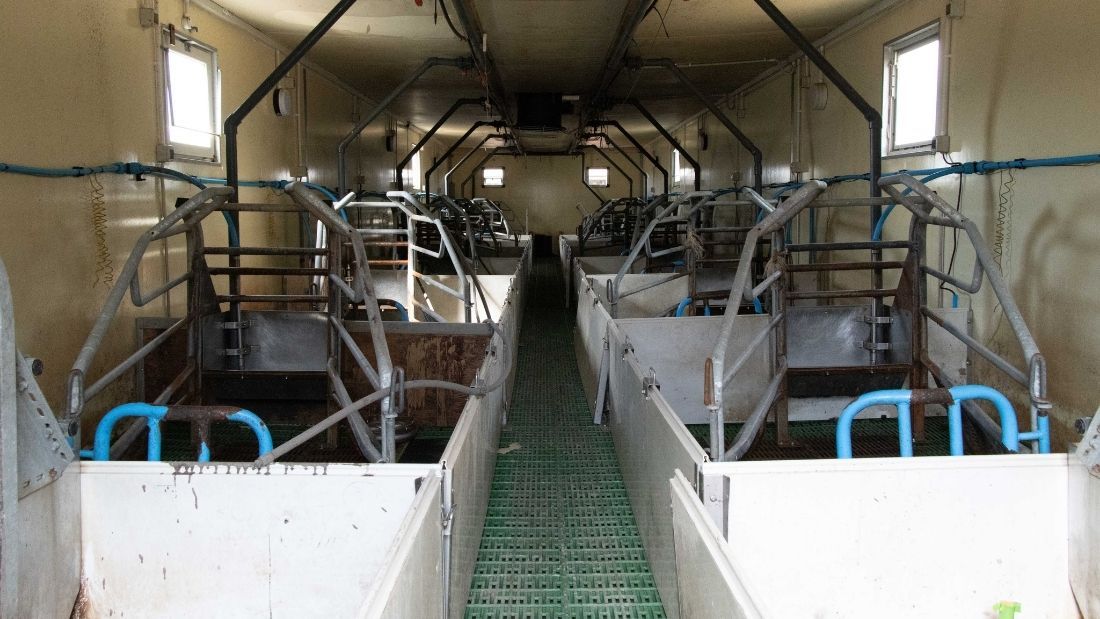 Viva! is proud to announce their victory in forcing the barbaric Calvesley pig farm to close following an undercover investigation in 2020.

Investigators filmed at two farms, Calvesley (a breeding facility) and Whiteshoot (a fattening and finishing centre), both owned by Winterbrook Farm Partners who supply British supermarkets, including Morrisons. The investigations took place over the course of three weeks in 2020, using hidden cameras to reveal the atrocities taking place inside the farms’ sheds.

Calvesley farm was a breeding unit and home to hundreds of female pigs who were routinely impregnated and forced to birth countless litters of piglets. Staggeringly, this farm produced on average 400 piglets a week.

Footage taken from Calvesley farm revealed highly disturbing examples of animal cruelty. Farm workers were filmed thumping young piglets – killing  them by slamming their tiny heads onto the concrete floor. Although legal, a brutally cruel act which is followed by the worker dumping the bodies aside – presumably because these animals were considered too small to be profitable.

All farms featured in the investigation were approved by the consumer assurance scheme Red Tractor, which claims all of their farmers’ ‘animals have been well cared for’’.

Shortly after the investigation was released Red Tractor dropped the farm claiming:

“We were very disappointed by some of the images in the footage. Protecting animal health and welfare is one of our top priorities. Red Tractor requires all members to meet every standard, every day and take any allegations of breaches seriously. We immediately launched an investigation and as a result the farms’ Red Tractor Certification have been suspended and sanctions put in place to address the issues raised through this process.’’

Yattendon Estates, the owner of the land the farm occupied, were so shocked at the animal cruelty and pollution caused by the pig farm they served the farm notice and evicted them from the estate.

This footage shows the now deserted land where the atrocities took place.

James Holes, estate manager, has been approached for comment but not replied.

Councillor Carolyne Culver, who represents Ridgeway ward where the farm is located, said, ‘I’m glad this case has been resolved. It’s essential that whenever there is evidence of animal cruelty it is dealt with urgently. Concerned residents contacted me when they saw the media coverage, and Yattendon Estates took action’.

“Our team witnessed appalling conditions in this investigation, documenting the systematic abuse of farmed pigs, whose short lives are filled with nothing but misery and pain. Pregnant and nursing sows were confined in cages while their piglets were ruthlessly mutilated with barbaric hot knives and pliers – all for the sake of food.

We are absolutely delighted that as a direct result of our work, Calvesley Farm has been closed down. Now, more than ever we need to seriously reconsider the catastrophic impacts of intensively farming animals and End Factory Farming Before it Ends Us. Veganism is on the rise and delicious alternatives to cruel meat, fish, dairy and eggs exist in all major supermarkets  – never has it been easier to choose plant-based.”

Video and photos from the investigation can be found here https://flic.kr/s/aHsmNZA14a