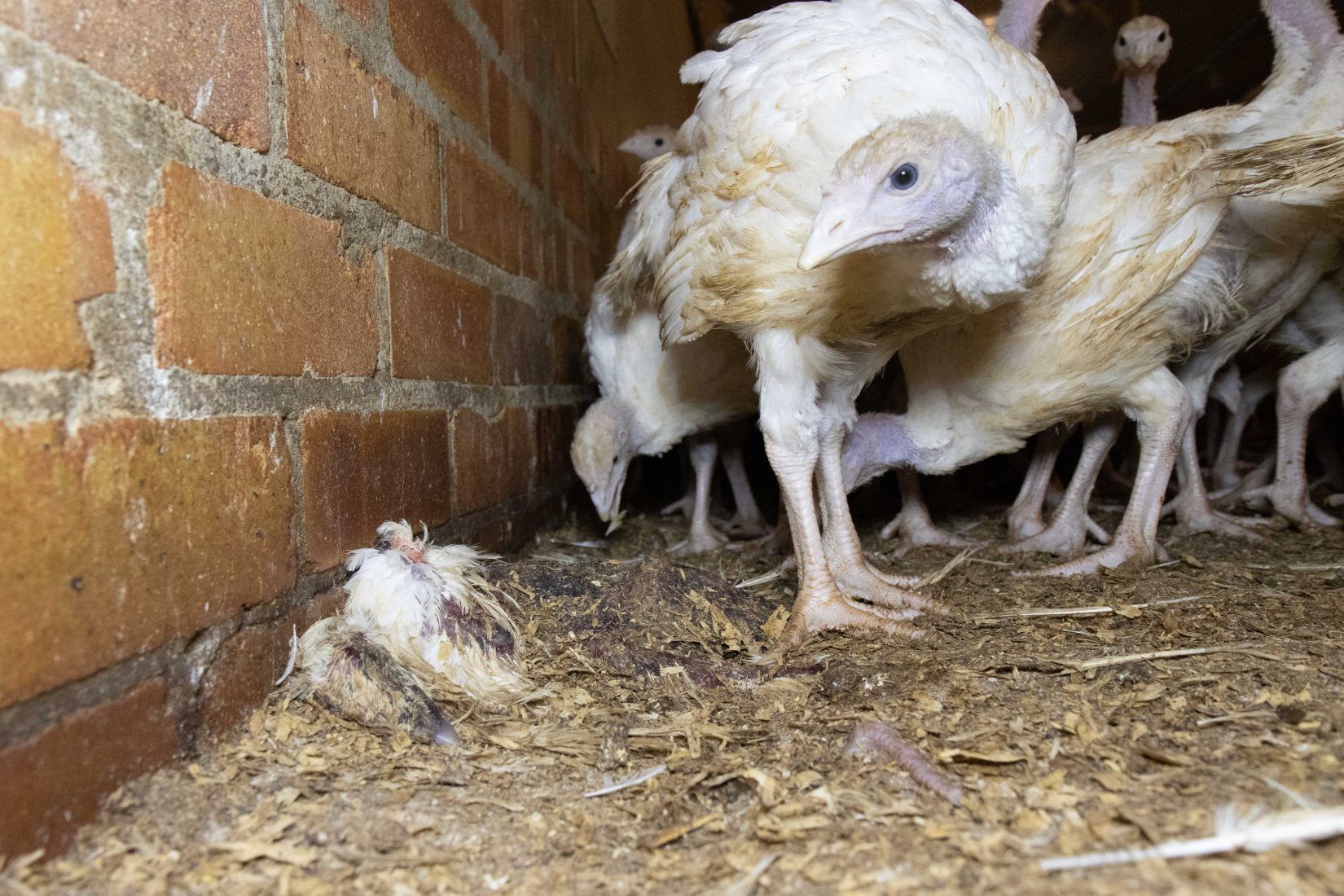 Suffering and pain
Viva!, have released damning footage from inside a deeply overcrowded Lincolnshire farm – contracted by one of the UK’s largest poultry producers, Hook 2 Sisters. Their evidence reveals disturbing scenes in which thousands of turkeys are tightly packed into industrial-sized sheds that rob them of any freedom to express their natural behaviours. These birds are forced to endure miserably short lives behind closed doors, all for the sake of a Christmas dinner.

Turkeys are innately curious and playful animals, who explore their environments by pecking, digging and foraging. Yet the intensification of turkey farming has restricted their most basic instincts. They have been selectively bred to grow so big and so fast, that their legs and lungs buckle under the strain. Farmed turkeys experience high levels of stress and anxiety, which leads to aggression and boredom – manifesting in injurious pecking and cannibalism. Beak tipping [1] is a routine practice that removes the end of the turkey’s beak, shortly after birth, in order to reduce the severity of pecking injuries; but is a wholly inadequate and cruel management strategy.

Every day of these turkeys’ lives are automated by mechanical feeders and lighting systems, in an attempt to control their habits and encourage them to rapidly gain weight [2]. The average lifespan of a wild turkey is three to five years, and the oldest known wild turkey lived to be at least 13 years old, but those bred on factory farms are killed between 12 and 24 weeks.

During our investigation, dead birds were found trodden into the waste-sodden litter. Red Tractor guidelines [3] state that welfare checks must be carried out at least twice daily and stockmen should walk within three meters of every bird.

Red Tractor also requires farms to distribute ‘environmental enrichment’ throughout the sheds on a scale of one pecking object per 500 birds. Although the farm met this baseline requirement, hanging plastic tubes and surplus litter bales provide meagre stimulation for such inquisitive and intelligent animals.

Factory farms pose potential risk to human health
Due to rising cases of avian influenza (bird flu) in the UK, on Monday 29 November the government imposed a mandatory housing order, stating that all farmers and keepers of poultry must keep their birds indoors and follow strict biosecurity measures. Filming for Viva! Campaigns was carried out during mid-October, prior to the first case identified on 26 October in Worcestershire, and in line with government biosecurity recommendations at the time.

So far this winter, there have been 59 confirmed cases of bird flu in captive birds (inc. commercial poultry). In the same period last year (Oct-Dec) there were eight instances (one low pathogenic H5N2, seven high pathogenic H5N8). Worryingly, numbers are much greater this year and have all been of the highly pathogenic H5N1 strain.

On overcrowded poultry farms, viruses spread and mutate with ease due to the close proximity in which these birds are forced to live with each other. Housed in sheds with the capacity for 20,000 birds each, these environments provide a perfect Petri dish for disease, causing serious health concerns for humans and birds alike.

Viva! have investigated countless factory farms in their near 30 years of campaigning, and the same issues are present across the board – overcrowding, sickness, dead animals and an absolute disregard for animal welfare. Combined with the devastating impact animal agriculture is having on the climate crisis and the serious health risks factory farming poses to humanity, how much longer can this industry continue to ravage our planet, our health and its animals?

“The total disregard for animal health and welfare witnessed on this farm is utterly depressing. Like most birds, turkeys are normally playful and inquisitive creatures, who enjoy exploring their natural environment, and foraging for food. Deprived of their most basic welfare needs, these birds are clearly squeezed tightly into barren sheds with minimal enrichment, as well as living unnaturally short lives.

“Unable to ever explore or forage, unsurprisingly like all intelligent animals, turkeys become bored. This is a common cause of increased stress and acute anxiety, which commonly results in higher levels of aggression, feather-pecking, and even self-mutilation. These animals aren’t living, they’re just existing to be exploited.

“Furthermore, I was appalled to see dead birds left rotting on the farm floor, which not only presents an obvious risk to hygiene, but also poses a potential disease risk to the whole flock, particularly now with Avian Flu cases worryingly on the rise. It’s hard to imagine that any sufficient, adequate, and important health and welfare checks were routinely carried out on this particular turkey farm.”

“These well-natured birds are treated as nothing more than Christmas commodities – packed into densely populated sheds, they experience nothing but pain and misery before sent to slaughter at a mere fraction of their natural lifespan.

“Animal agriculture is abhorrent for animals, whatever the system, but factory farms like these also pose significant threats to human health and the climate catastrophe. Scourging the British countryside, they’re a hotbed of disease, with the potential to spawn our next global pandemic – and with the rise of bird flu cases, we can’t be far off. So why not truly bring peace to all this Christmas and try vegan instead.”

Investigators for Viva! Campaigns observe strict biosecurity at all times in line with government guidance. All equipment was disinfected before and after each visit

Video and images can be viewed here