The UK’s first vegan cinema ad will now be launched! 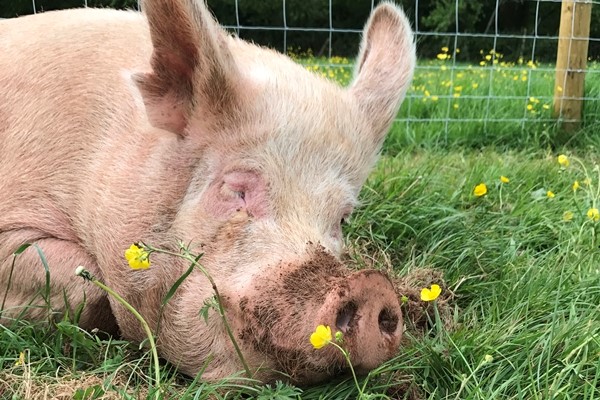 Thanks to you, Viva! has smashed its target of £100k and the UK’s first vegan cinema ad will now be launched!

The ad will reach cinema goers from all backgrounds, urging viewers to see the reality behind UK factory pig farms, in contrast to the beautiful life that Hope and her piglets live at Dean Farm animal sanctuary. It will be followed by the message ‘Try Vegan’.

In order to get the ad out there, our ‘Bring Hope To Millions’ campaign was born and the challenge was to raise £100k in order to be able to show the ad in cinemas all over the UK.

An incredibly generous (anonymous) donor, who was completely blown away by the campaign, offered to match every single donation up to the value of £50k!

The campaign ran for four weeks with the hashtag #bringhopetomillions and had thousands more shares and likes on social media. The success of this campaign heralds a new era in which the power of community can rival even the meat-industry giants.

See the 'Hope Not Hell' cinema advert below

After weeks of campaigning, we are ecstatic to be able to say we have succeeded, this is really going to happen and it is thanks to you that we have raised £101,952. We now have the ad approved for cinema showing and the funds to get it on screens

Juliet Gellatley, Founder and Director of Viva! says: “I am so excited! We have been empowered by the vegan community to bring Hope to the meat-eating masses – and who can resist her charm? Not me that's for sure. I love that girl!

“The contrast between Hope’s freedom and the terrible conditions on factory farms is an extremely poignant message. This ad has the potential to bring about real change by showing brand new audiences the reality of factory farming. We chose cinema ads because we know that they are one of the best ways to reach an emotionally engaged audience and we are so grateful to all of the people who have been part of this campaign and helped to make it such a success!.”

This is the message that will make a difference. We will show this powerful contrast of freedom and incarceration, joy and misery, pain and happiness to audiences that are four times more likely to be emotionally engaged than television audiences.

Viva! want to truly thank you again for helping us bring this message of Hope to normal, everyday people while they’re really paying attention.

Never before have pro-vegan advertisements been shown in this way. We’re going to be the first to bring the message into the mainstream in such a powerful way.

We know people can change the world. We know that we can make this world a kinder, better place for all humans and animals.

Thank you for your help!

You are part of something huge. You are helping us show more than two million people they can bring Hope to millions too.

This campaign has shown us just how strong we are, the good work we can do and the change we can create. Together!