The amazing benefits of fermented foods 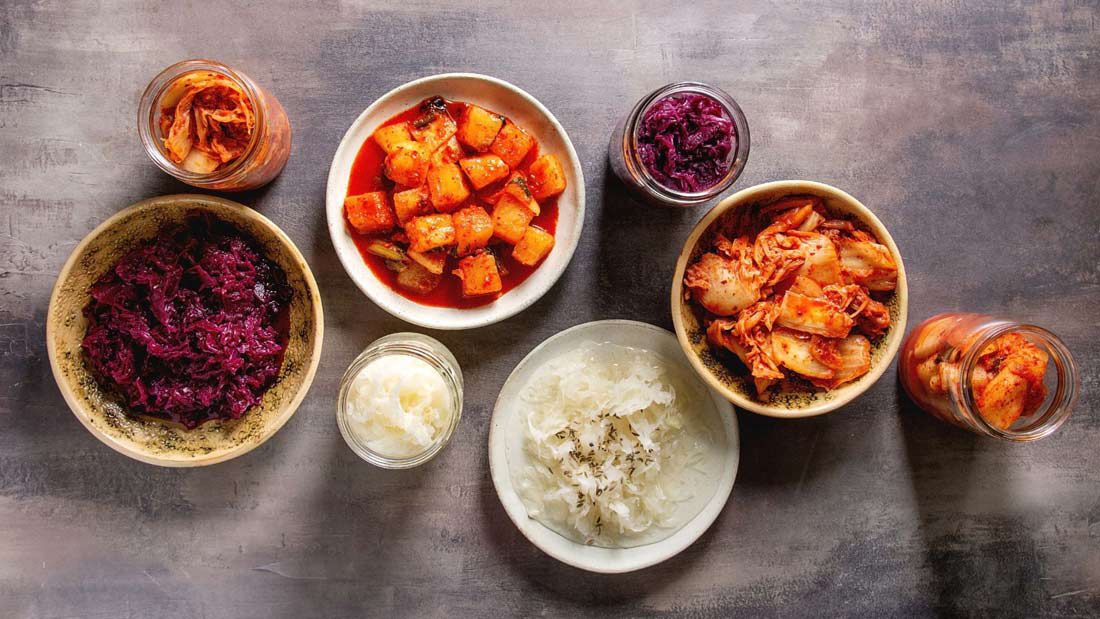 Fermenting involves the use of microorganisms, such as bacteria, fungi or yeast, in preserving foods and drinks. The process usually alters the original food, enriching it at the same time, making it tastier and healthier.

These popular fermented cabbage dishes are produced by lactic acid fermentation. The vegetables are finely cut and salted before being submerged in water, allowing the naturally-present bacteria to feed on the vegetables’ carbohydrates and produce lactic acid. It’s this that preserves the food and produces its sour taste. The bacteria also produce vitamin K and some B vitamins, increasing its nutritional value.

When you eat sauerkraut or kimchi, you also eat the lactic acid bacteria, which make themselves at home in your colon and help you to digest food. In fact, fermented veggies lower gut inflammation because they supply beneficial bacteria that have a soothing effect on the gut wall.

Sauerkraut is a great source of vitamin C, vitamin K and iron as the fermenting makes them more bioavailable. It also contains some calcium, manganese, B vitamins and is an excellent source of fibre. To get the most benefits from sauerkraut, eat it raw because cooking not only destroys vitamin C, it also kills all the good bacteria.

Kimchi is usually made from salted Chinese cabbage (Chinese leaf) and other vegetables and is flavoured with garlic, chilli and ginger. There are hundreds of varieties and each is a little different – many contain seafood or fish-based condiments so always check the ingredients. But it’s the fermented veggies that account for kimchi’s many benefits. It’s an excellent source of beta carotene, used by your body to make vitamin A, it’s rich in vitamins C and K, and contains good amounts of calcium and iron.

Both kimchi and sauerkraut are made from cabbage and all veggies from the cabbage family have anti-cancer properties. They are also anti-inflammatory and antioxidant and so help to protect your overall health. Combined with medical treatment, these foods can even help to combat the Helicobacter pylori stomach infection.

Tempeh is made by the fermentation of soya beans, a process that binds them together in a cake-like form. It involves soaking the beans for several hours, cooking them and then allowing them to ferment with the fungus Rhizopus oligosporus. The result is soft soybeans bound together by white mycelium (thick web of fibres) from the fungus. Before eating, tempeh needs to be cooked and flavoured and is usually fried or smoked.

Because tempeh is made with whole soya beans, it retains all their nutrients and is therefore a good source of protein, healthy fats, carbohydrates, fibre, B vitamins (but not B12), vitamin K, iron, calcium, magnesium and some other minerals. The protein in tempeh is high quality and there’s a lot of it – a 100-gram serving contains around 20 grams of protein!

During the fermentation process, the fungus releases enzymes which break down some carbohydrates in the soya beans, making them easier to digest. The same fermentation also breaks down phytic acid – that reduces the absorption of minerals such as iron or calcium – and as a result, tempeh has low levels of phytic acid, allowing more of the minerals to be absorbed!

This traditional Japanese seasoning is produced by fermenting soya beans with salt and koji – rice fermented with the fungus Aspergillus oryzae over a long period of time. To make koji, Aspergillus oryzae is mixed with steamed rice and the fungus produces enzymes that break down rice starches into sugars, and proteins into amino acids.

Koji is then combined with cooked, crushed soya beans and salt and that starts a second fermentation in which the koji enzymes break down soya proteins, starches and fats into readily digestible amino acids, sugars and fatty acids. The sugars in this mixture support the growth of lactic acid bacteria, which ferment the sugars and produce acid, giving rise to the characteristic umami flavour.

The final product, miso, is thick paste rich in amino acids, iron, magnesium, manganese, zinc, several B vitamins and vitamin K. It also contains millions of health-beneficial bacteria that help to improve your gut health. The only downside is that it contains a lot of salt so don’t use it in large quantities.

Thanks to some of the fermenting bacteria, miso contains small amounts of vitamin B12, but it’s not enough to be your only source.

This unique drink is made by adding bacteria and yeast to sweetened tea and allowing it to ferment for several days. The bacteria and yeast feed on the sugar, producing acetic acid, other acidic compounds and gases that make kombucha fizzy. All the microorganisms combined together form a floating blob, also called SCOBY (symbiotic culture of bacteria and yeasts), which can be used to ferment new kombucha.

The acetic acid in finished kombucha has antibacterial properties and can support treatment of bacterial infections and those caused by Candida yeasts. However, the acid doesn’t affect the fermenting bacteria so by drinking kombucha, you’re taking in all those good bacteria that can help to improve your digestion. Kombucha made from green tea is also a great source of antioxidants.

Are fermented foods for everyone? 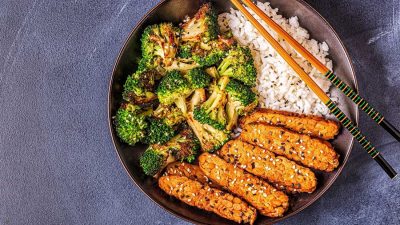 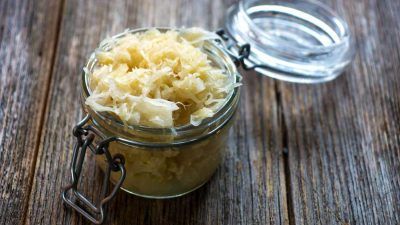 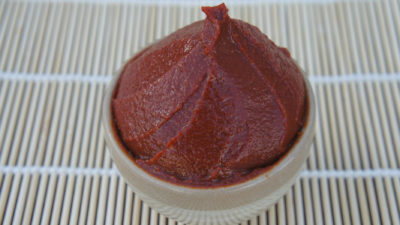