MP Lisa Cameron and Viva! say go vegan to save the planet 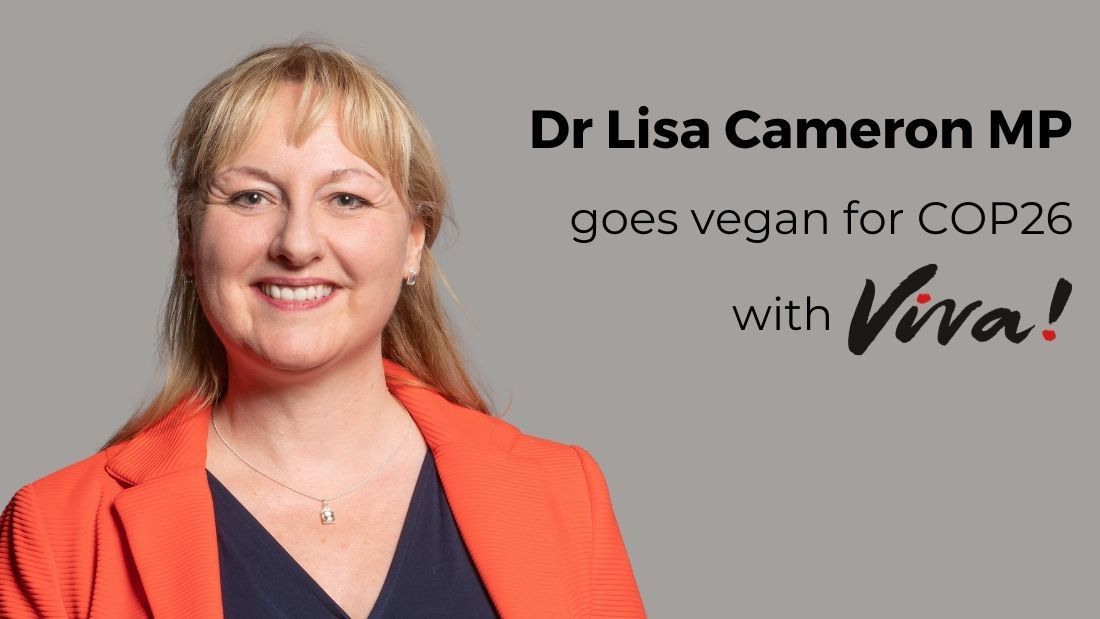 Animal agriculture is a leading cause of climate breakdown, and meat accounts for nearly 60 per cent of all greenhouse gases from food production. This November Viva!, the UK’s leading vegan charity, and MP Lisa Cameron, are asking the public to go vegan for COP26.

As world leaders unite in Glasgow for COP26 to discuss the future of the planet, Viva! and MP Lisa Cameron are raising awareness of the devastating impact animal agriculture is having on the environment.  Going vegan is the SINGLE biggest action individuals can take to reduce their impact on the natural world. Carbon emissions cannot be realistically reduced without a national and global reduction in the consumption of animal products.

MP Lisa Cameron has committed to going vegan for the duration of COP26, aiming to inspire others to ditch meat and dairy for the sake of the planet. Cameron is a dedicated campaigner tackling both the climate crisis and animal welfare issues. She explains her decision to go vegan for COP26:

“I’m delighted to be working with Viva! during COP26. I was vegetarian for decades and have become increasingly aware of the devastating impact animal agriculture is having on our planet and the climate crisis. The scientific evidence is overwhelming clear, we must all drastically change our eating habits if we want to help tackle the climate crisis.

“I’ve been thinking of trying vegan for a while, so this is the perfect incentive for me to give it a go.”

By choosing to reduce our consumption of animal products, as a species, we can reduce the widespread degradation of critical ecosystems, promote a shift to more healthy, sustainable plant-based diets an actively reverse damage done to planetary functions, ecosystem services and biodiversity.

The Viva! team will be in Glasgow as COP26 begins. Join them on 1 November where they will be running an exciting street outreach giving out free vegan sausage rolls.

During COP26 the charity are placing billboard adverts in Euston Rail Station, Edinburgh Waverlay Railway Station and in Central Edinburgh, plus 6 posters across Glasgow city center, to highlight veganism as a solution to the climate crisis.

On 6 November, Viva! and other animal rights groups will join the COP26 climate march as part of the contingent ‘Vegans Unite for the Planet’. Inspired by the Plant-Based Treaty, a landmark international treaty and first of its kind to put food systems at the heart of combating the climate crisis, Vegans United for the Planet was created specifically for COP26.  Both the treaty and the contingent aim to halt the widespread degradation of critical ecosystems caused by animal agriculture, to promote a shift to more healthy, sustainable plant-based diets and to actively reverse damage done to planetary functions, ecosystem services and biodiversity.

Will Sorflaten, Senior Campaigner at Viva!, discusses his hopes for CO26:

“There has never been a more important time to talk about animal agriculture and the devastating impact it is having on our planet. Going vegan is the SINGLE biggest action an individual can take to combat the climate crisis. We’re proud to support Lisa Cameron during World Vegan Month and COP26;  by joining forces we hope to inspire world leaders and the public to change the way they view diet and the climate crisis. COP26 is a unique opportunity to speak about these critical issues and tell the world to go vegan, now!”

To find out more about Viva! and COP26 please visit vegannow.uk.