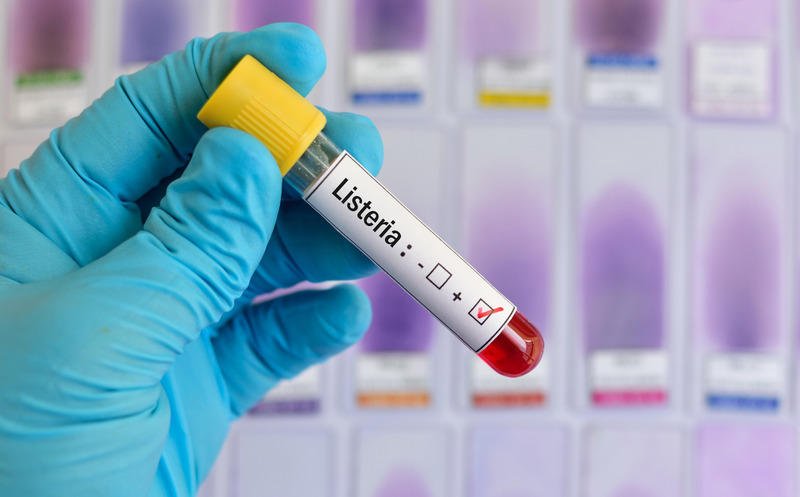 Listeria bacteria are common and have been found in a range of chilled ready-to-eat foods including pre-packed sandwiches, pâté, butter, soft cheeses, cooked sliced meats and smoked salmon. The bacteria are unusual in that they can flourish at very low temperatures, such as in refrigerators. They can also survive vacuum packing and even microwave cooking!

Contracting listeriosis (an illness caused by Listeria) produces flu-like symptoms and is a big risk for pregnant women. It can lead to blood poisoning, miscarriages, stillbirths, and can produce abscesses, meningitis, septicaemia and death. Those who have a weakened immune system are more likely to pick up an infection, for example, people who have had a transplant.

Listeria, Campylobacter, Salmonella and E.coli are the most common types of food poisoning in the UK. Eating animals massively increases your chances of contracting food poisoning. Almost all cases of food poisoning originate from meat, fish, shellfish, and dairy products, or from plants contaminated with animal products, such as manure (so wash your veg and salad!). This makes sense as bacteria from animals are much more likely to infect us than bacteria from plants. After all, we are a mammal, not a carrot!

For this reason people historically have caught many diseases from farmed animals including  tuberculosis, listeriosis, Salmonella, E.coli and BSE. The most common cause of food poisoning is Campylobacter – with more than half a million cases annually in the UK. The Food Standards Agency reckons that eating undercooked chicken, or cross contamination from raw chicken meat, are the main vehicles of infection. Hardly surprising, when up to one-fifth of fresh chickens sold in retailers in Britain are riddled with this bug.

Meat, milk, cheese and eggs all provide the ideal environment for potentially deadly bacteria to   grow and from farm to fork, food poisoning germs have several chances to infect animal   products.  Intensive farming – with thousands of animals squeezed into cramped, dirty and   unnatural habitats – creates a breeding ground for germs. Poor ventilation in buildings and  overcrowding means that airborne bacteria spread easily and make infection unavoidable.

As an individual trying to protect yourself and your family from food poisoning, there is only so much you can do to ensure that food is safe to eat. As long as intensive farming, slaughterhouses and processors exist, controlling food poisoning is effectively out of our hands. But we can choose what we eat and how we cook and serve it. A vegan household is much less likely to cause food poisoning than one preparing and eating animal products.

A vegan diet is by far the kindest and safest choice for you, your family and the planet. Find out more about how to easily go vegan here.