It’s Only a Dress Rehearsal… 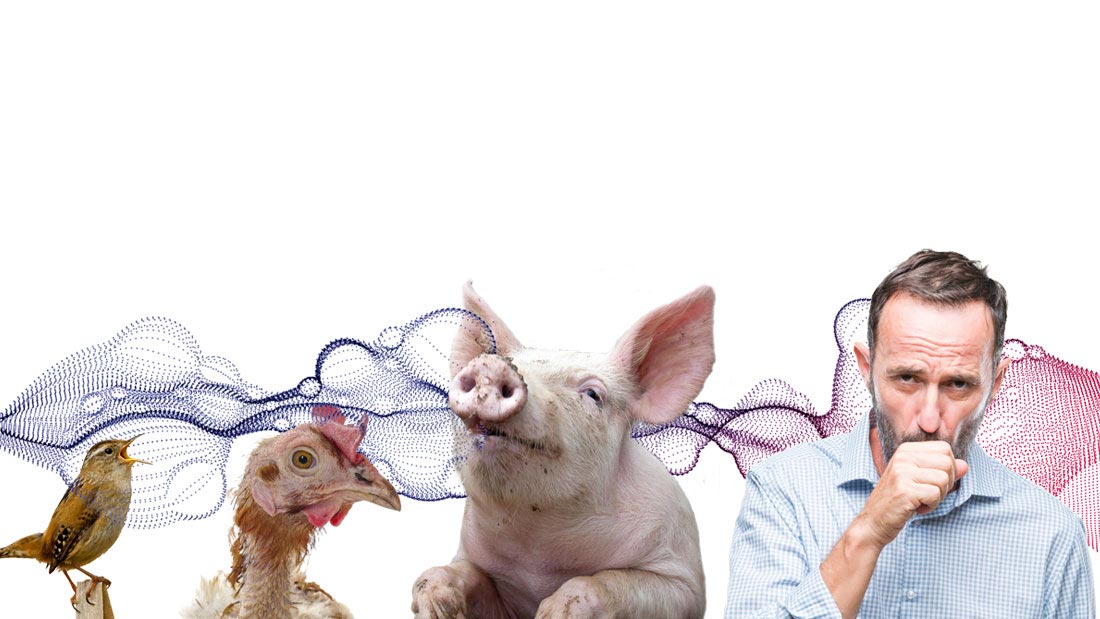 Quirky things are viruses – malign little cuckoos that sneak unseen into our bodies, latch on to cells, take them over and call them home. They hijack our cells reproductive machinery, our cells then surrender entirely and become baby-making factories, churning out multiple copies of their new master. If it happens to be a disease-inducing virus, you can be in deep trouble because we can’t really kill viruses without killing our own cells.

Well, that’s the biology done (which I can’t pretend to fully understand) so let’s move on to the reasons why people in China are walking around in space suits and every few years, another ‘deadly virus’ story hits the headlines – followed by a palpable sense of relief when it isn’t as bad as we expected. It’s because health professionals, journalists and governments all over the world are nervously waiting for the ‘big one.’ Not if but when!

The last big one, of course, was the 1918 Spanish flu pandemic (so called because first reports came out of Spain) which scythed through the global population with a vicious vengeance. It is the young and old who are usually the worst affected by flu but bizarrely, in this outbreak, it was the young and healthy in the 20-40 age range who mostly took the hit. As if they hadn’t suffered enough already, soldiers of the Great War were felled in their hundreds of thousands.

It’s estimated that around 500 million people became infected and least 50 million, perhaps even 100 million, people died. It was given the identity H1N1and it’s still hanging around. In 1957, the H2N2 strain appeared, was called Asian flu and killed up to four million. By 1968 it had changed a little to become the H3N2 virus, Hong Kong flu, and claimed another two million lives. In 2009, up popped a variant of the Spanish flu (H1N1) and 6,250 deaths resulted.

Flu viruses don’t suddenly disappear when an outbreak ends but continue to swirl around in various populations, constantly mutating and changing until one of the new strains hits the jackpot and an epidemic explodes. Let’s put this into some sort of context – seasonal flu (which also constantly changes) kills about 646,000 people across the world every year – a death rate of less than one per cent of those infected. The current coronavirus has a fatality rate of around one to two per cent.

Okay, so where am I going with this? The primary source of influenza is birds, who have lived quite happily with what were largely benign viruses for thousands of years – until something changed. The science isn’t absolutely clear yet but that ‘something’ was almost certainly animal farming. If you cram together animals who are all genetically similar – and therefore genetically susceptible to the same infections – disease can spread like wildfire. If you have two different species, both overcrowded and pretty close to each other – say pigs and chickens as frequently happens in the Far East – you have a problem.

Pigs are genetically much closer to humans than are birds and can act as a vector between the two species. A wild bird infects overcrowded chickens with a benign flu virus which suddenly finds itself in mutation heaven and produces innumerable new strains, most of which are unviable and die out – but one, just one of millions, is capable of infecting pigs. Lots more mutations and the pigs pass it back to the birds but now you have an avian flu strain containing genetic material that can infect wild birds and humans.

In 1997, a type of bird flu appeared (H5N1) that is deadly to birds and mammals, including humans, killing nearly 60 per cent of those it infects. And it is this which has given authorities everywhere the jitters because if that ever turns into a pandemic, the world changes beyond recognition. At the moment, it infects mostly those who are in direct contact with poultry that carry the virus and is not easily transmitted person to person but it could take just one tiny mutation.

Of course, coronavirus didn’t originate like this but is thought to have come from one of China’s ‘wet’ seafood markets where caged animals are also bought and slaughtered to order. I really can’t face describing it in any greater detail but up to 100 different species of wild creatures can be on offer, from pythons to baby deer, bats to civet cats, chickens and wolf cubs – yes wolf cubs. But before we be too righteous, look in any posh butchers in the right season and you’ll see a whole menagerie of wild animals hanging up – hares and rabbits, pheasants and partridge, muntjac deer and ducks.

It is thought that this new coronavirus spread from bats to pangolins and no one could possibly have predicted that, could they? Well, no – unless you discount the outbreak of SARS, another coronavirus that appeared in China in 2004, which infected some 8,000 people and killed 774. The source? Civet cats, which again are thought to have picked the virus up from bats!

The terrifying Ebola virus was also down to people eating wild animals – bats again are thought to have infected primates, from whom humans caught the virus. Then there’s HIV and AIDS, which seem to have gone off the boil in the UK because of successful medical intervention but the statistics are staggering. There are an estimated 38 million people living with HIV and around a fifth have no idea they’ve got it. The total death toll so far is 32 million, with 770,000 dying in 2018.

There are two strains of HIV, the most virulent being HIV-1, believed to have spread to humans through the butchering and consumption of chimpanzee meat. The less virulent HIV-2 can be traced back to sooty mangabey monkeys via a similar route. They each contain variations of SIV (simian immunodeficiency virus).

It‘s fair to say that most of these viral diseases have originated in the Far East or Africa but before you sign up to UKIP or the EDL, consider our own contribution to death and despair. Having just spent three weeks editing Viva!’s disturbing Hogwood documentary, I can tell you that our animal farming practices have killed and diseased far more people than anything from China – so far, at any rate.

Meat and dairy play a central role in all the degenerative (as opposed to infectious) diseases that kill most people in the ‘developed’ world. We know that with a sensible diet, which includes shunning all animal products, we can completely reverse heart disease and type 2 diabetes and slash our risk of cancers, obesity, Alzheimer’s and other diseases.

That’s the science but despite it, a flood of meat and dairy has continued to flow into our shops and restaurants at knock-down prices, spurred on by the widespread use of antibiotics, used to try and keep diseases at bay in animal farming. Antibiotics are effective against bacteria, not viruses, and when they were first introduced shortly after World War II, they transformed our lives by eradicating infectious diseases such a TB. For livestock farmers they were manna from heaven, enabling them to cram thousands of animals into single sheds and dose them with antibiotics to ward off diseases, to cure diseases or simply to make healthy animals grow faster. It was also Bonanza time for Pfizer, Monsanto, Merck and the other pharmaceutical companies whose growth became stratospheric.

China wasn’t the only country that failed to change its way after clear warnings. Within some 20 years of their introduction, the problem of antibiotic resistance in the UK started to show as drugs ceased to be effective and in 1968, the Swann report made a series of recommendations to curb the spread. They were watered down by government or simply ignored and as a result, we are where we are. The Chief Medical Officer is warning of an antibiotic resistant apocalypse; unless there is dramatic change, by 2050, antibiotic resistance will kill more people than cancer – currently running at about 10 million people a year globally. The UK’s annual cancer death toll  is 165,000.

Nearly every food poisoning bug in the UK has hit the headlines at some point – Salmonella, Clostridium, Campylobacter, Staphylococcus, E. coli and Listeria – they all have their origins in meat or dairy and are increasingly becoming antibiotic-resistant. More than a million people in the UK go down with food poisoning every year – a huge underestimate according to the Food Standards Agency (FSA) as only the most serious cases get reported. About 500 people die from one or the other.

Why is it, do you think, that whenever this subject hits the headlines, the media and ministers always blame it on overprescribing by doctors when around a third of UK antibiotics are given to farmed animals? In the US is it 80 per cent and across the world the average is about 70 per cent and many new resistant bacteria are appearing in animals? It’s why Britain’s supermarkets are now showing record levels of superbugs in both chickens and pork. Could it be that the survival of free markets is much more important than our health – and deaths, come to that?

If you’re a campaigning vegan, you’re a weirdo, a fanatic, a nutter. What could be weirder, nuttier or more fanatical than defending a system that’s responsible for eye-watering cruelty and causes the deaths of tens of millions of people every year and over 70 billion animals? And don’t get me started on the environment!

Perhaps it’s no accident that the anagram for coronavirus is CARNIVOROUS!

About the author
Tony Wardle
I have been with Viva! since its launch, helping Juliet with precious few resources – staff or money! My title is associate director and I can turn my hand to most things that Viva! does, and can talk on almost all the subject areas we cover. But my time is consumed mostly with words, writing for and editing our supporters magazine, Viva!life, checking, editing a large output of written material as well as conceiving and writing much of it.