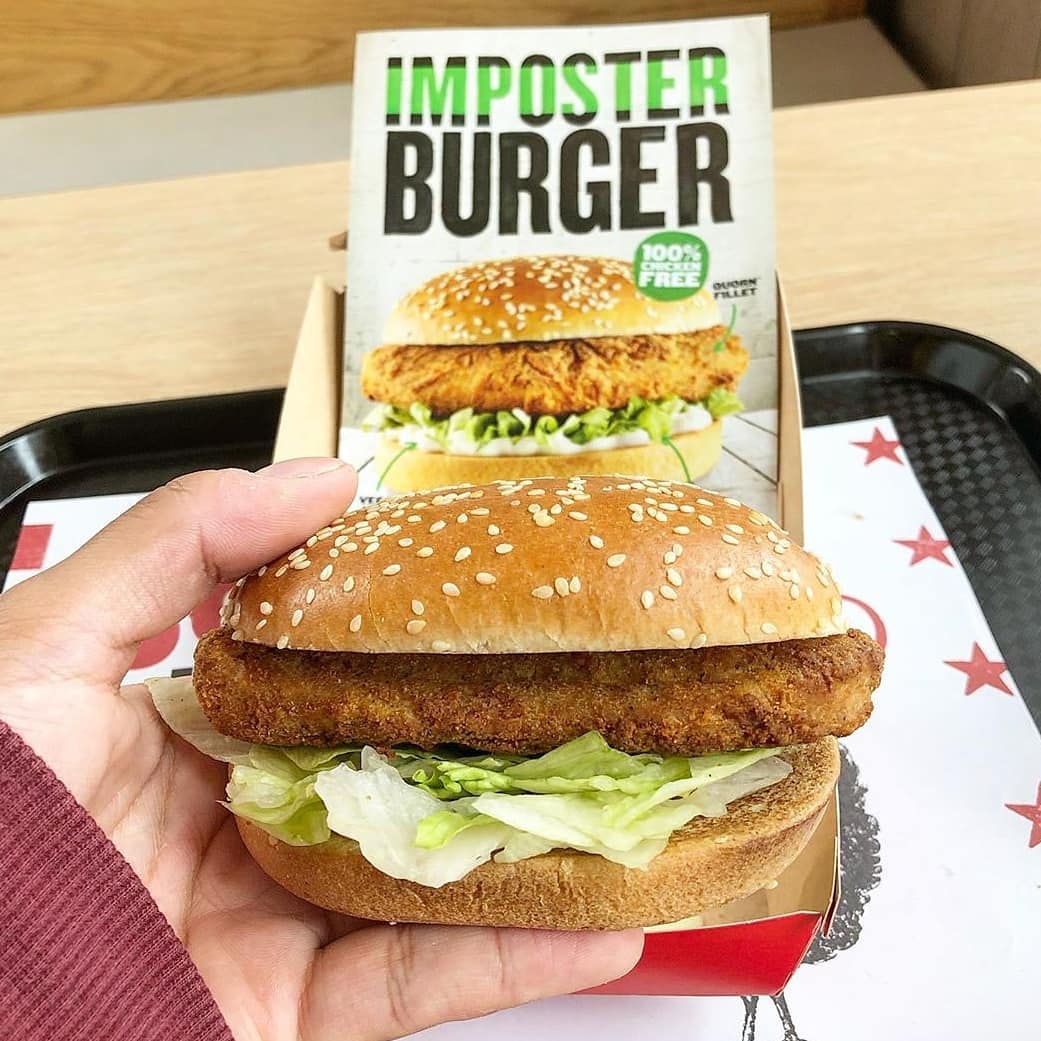 The launch of the KFC’s vegan ‘Imposter Burger’ is a hot topic in the Viva! office at the moment. Everyone’s asking who will and who won’t try it. When businesses offer new vegan ranges it usually feels good to support them. But, for me, something doesn’t quite sit right this time. This is my attempt to wrap my head around the moral dilemma.

One’s first reaction to news that vegan options are infiltrating even the most meat-centric establishments is, ‘Yes! We are winning!’ And to a degree we are. There is no doubt that the word ‘vegan’ is becoming mainstream. The easier veganism is, the more likely people are to try it. It’s extremely important for the movement that veganism is normalised and accessible to everyone. Viva! is supportive and encouraging of those transitioning to veganism or reducing their consumption of animals, so for that reason, it is great that companies like KFC, Burger King and Subway are promoting the lifestyle.

However, is that where the good news ends?

The most common argument for supporting vegan options is to influence supply and demand. Most people believe that if more people go into KFC and buy the vegan burger, KFC will divert money away from killing chickens and invest in vegan products instead. If this were the case it would be great, but there is reason to doubt this is how it works.

Firstly, we don’t know how KFC spends our money. Do we think they have a vegan pot into which they put our pounds and only invest in veganism? KFC’s primary business is killing chickens so by financially supporting them, through buying vegan products or not, we are maintaining their ability to farm and kill tens of millions of chickens a year.

Secondly, and perhaps more importantly, when Burger King launched the Beyond Burger, it reported no fall in meat sales. The same amount of people were going in to buy meat but, in addition, a bunch of vegans and veggies were going in to buy the Beyond Burger. So rather than divert funds from meat sales, it just bolstered total sales. Of course, it’s early days and it may take a little longer to see the true impact.

Greggs have also reported a sharp rise in sales after launching the vegan sausage roll. This also suggests that in addition to their usual customers, they are now attracting vegans, vegetarians and meat reducers who weren’t previously frequenting the bakery. There is nothing to suggest that meat-eaters are switching to the Quorn alternative, in fact these figures suggest they’re not. If it was a simple switcheroo, sales wouldn’t have risen so dramatically. I don’t see why the case of KFC would be any different and it makes sense if you think about it.

Who are most excited about the vegan KFC burger (and other items such as the Gregg’s sausage roll)? We, the vegans. Hopefully a handful of meat eaters will try it out of curiosity but is it enough to turn them to the green side? Most meat-eaters already had everything they wanted from the chain so why would they swap their chicken for Quorn? Perhaps, being able to enjoy a plant-based version of their favourite burger is what some have been waiting for. After all, many people eat meat despite the animal cruelty involved, not because of it. If there’s an easily available alternative, wouldn’t they take it?

Could it be for health reasons? Well, if you’re eating anything in KFC you’re unlikely to be health conscious. Take the healthiest foods on the planet, deep fry them and wedge them between two lumps of processed carbohydrate and any health arguments fall flat on their face. That’s not to say that a small shift to the plant-based option isn’t worthwhile or won’t lead to bigger change down the line: perhaps, after watching a documentary like the Game Changers, ordering the vegan version is someone’s first exploration of a healthier lifestyle.

Okay then, so what about for environmental reasons? It could be the case that KFC customers are becoming more aware of environmental issues and therefore want to minimise their impact by choosing the plant-based option. This is a commendable step in the right direction. Unfortunately, KFC has a horrendous record when it comes to social and environmental issues.

Who are the vegan options for?

If these meat-free options aren’t for existing vegans, they should be reserved for the v-curious meat-eaters. We vegans like to claim credit for the blooming and ever expanding shelves of vegan products in supermarkets but the truth is we’re not the ones driving this change – it’s the meatless Monday flexitarians. And thankfully, these are going to be the people who save us from having to set foot in a KFC or McDonald’s.

If you want to try a chickenless burger, give it a go but we can’t pretend it is some kind of moral obligation.

The only time you could argue we have a moral duty to fight our instincts and venture into one of these eateries is if they are genuinely trialing the food. In this case, it is in the interest of veganism to ensure ‘vegan’ is permanently on the menu for the reasons stated earlier about normalisation and accessibility. (Call me cynical but I have my suspicions that companies call it a ‘trial’ to cause a PR frenzy but plans are already in place to roll out the new product regardless.)

How is it different from shopping in a supermarket that sells meat?

When I’ve posed this argument against vegans giving KFC our patronage, I’ve been faced with the rebuttal that we therefore shouldn’t shop anywhere that serves meat, including supermarkets. However, there is a subtle but important difference.

The truth is, to be totally consistent with our values, we probably should only be shopping in 100 per cent vegan, independent retailers. But for most people that’s not always practical – location, price, convenience and opening hours are important factors.

Most of us have been shopping in supermarkets since we were getting lost in the fruit and veg aisle as a child. Unless we were some of the lucky minority who were born and raised vegan, as consumers we have made the switch from buying animal to plant-based products while using supermarkets. That’s an important consumer statement. However, I’ve never spent my money in KFC before and I’m not inclined to suddenly start just because they offer one thing I can eat. Doing so just doesn’t convey the same message as being an existing customer who changes their preferences.

KFC’s primary business is chicken and so it has a vested interest in maintaining the population’s appetite for the bird. The vegan burger is even called ‘The Imposter’, implying that it’s inferior to the ‘real’ thing (the name has since been changed to Original Recipe Vegan Burger). It’s naive of us to think that they’ll ever become Kentucky Fried Quorn (although it does have a nice ring to it). The only way I see this ever happening is if meat is outlawed for environmental reasons.

A supermarket on the other hand is far more flexible. They offer so much more than meat and could survive without it on their shelves. According to the Food Marketing Institute, perishable meat makes up about 12.64% of total supermarket sales. The highest yielding department is dry grocery food. It therefore makes much more sense to use of our buying power here. Supply and demand plays a larger role in supermarkets because of their adaptability and because of the dietary diversity of the customers for whom they cater.

Even if we agree that supermarkets are equally as bad as KFC, just because we compromise in some aspects of our life, doesn’t mean we should compromise everywhere. We have to make considerable more effort to avoid shopping in supermarkets and it is easy to understand how the convenience factor affects our habits. Conversely, as established vegans, it takes zero effort to avoid KFC – it just hasn’t existed in our consumer consciousness until now (except in opposition).

As humans, our reductionist nature makes it hard to accept nuance – we love simple, black and white solutions – but we should evaluate these things on a case-by-case basis. Not all fast food vendors are equal and neither are all supermarkets.

Is it a good thing KFC are offering a vegan burger? Yes. It helps normalise veganism, provides an option for those wishing to reduce their meat consumption and is convenient for those who already eat at KFC.

Should existing vegans support it? Yes, by encouraging our meat-eating friends to try it and by spreading the news.

Should existing vegans become KFC customers and buy it? Probably not. Unless its future really is dependent on a trial period or if you’re stranded in a food desert and it’s your only option.

If you’re an existing vegan and just want to try it out of curiosity, go ahead. Just don’t do it under the illusion that it’s helping the tens of millions of chickens killed by KFC each year. But if you want to spice up your curiosity with a pinch of food activism, convince a bunch of your meat-eating friends to accompany you and give The Imposter a go. That way you can satiate your appetite while gently encouraging others to change their food choices.