Home » Blog » Hogwood: A Victory Against All Odds

Hogwood: A Victory Against All Odds 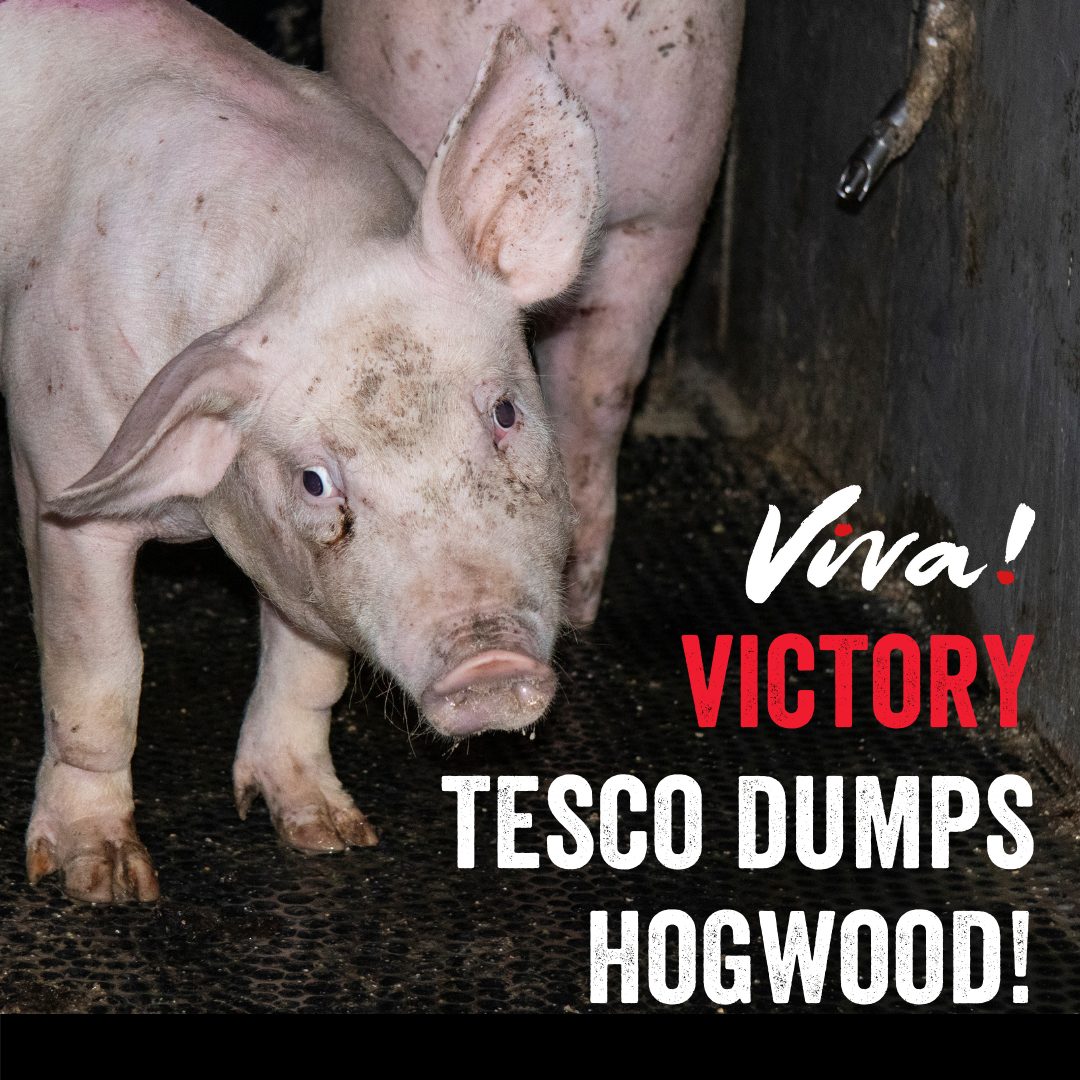 Our exposé of this miserable hellhole touched our supporters like nothing before, so abysmal and desperate were the conditions of the pigs. Our investigations were splashed across national newspapers and shared across the world. Yet Tesco, the government, National Pig Association, Trading Standards and Red Tractor repeatedly leaped to Hogwood’s defence.

They tried – and failed – to silence us with a Channel 4 documentary, The Truth About Vegans, which focused on our Hogwood investigation. The factory farm tightened its security and no doubt they thought we could never return to help the victims trapped inside.

But I made a promise to the pigs that we would never give up.

We went back with hidden cameras

And so, against all odds, our team managed to film again inside Hogwood – and this time, we left cameras for one week.

What we filmed broke my heart.

Sick and dying pigs were dumped in gangways – terrified and ruthlessly kicked out of the way by farm workers, struck with metal riding crops and hand tools.

In the artificial insemination shed another farm worker was filmed slamming the front end of a metal rape rack down onto a confined pig – she screamed as she was jabbed with an injection in her face to force her to move.

Where we found acts of live cannibalism last year, we filmed one completely traumatised pig enduring an extended attack. It was horrific. She was being bitten and bullied by the others locked up with her. She was unable to escape, leaving her body covered in excruciating wounds. Attacks such as this are unheard of in the wild but here – in these desperate conditions – they’re certainly not uncommon.

What our three investigations spanning the last three years show is that Hogwood pigs were still in pain, leaving me more horrified than I thought possible.

When I first investigated Hogwood in 2017, conditions were so bad I was sure Tesco would act. I remember as if it were yesterday, stepping into a colossal shed that was more tightly packed with pigs than I have ever seen. There was no gangway and I tried to step carefully through them but pigs, being bright but utterly bored, swarmed towards me and nibbled the coverings of my shoes that I wore to ensure there was no spread of disease. I looked around and there were hundreds of animals about three months old and all wide awake at this early hour. This place didn’t switch off the lights and there was no way any animal could sleep properly because of the overcrowding – there simply wasn’t space.

I walked into another vast warehouse; a tiny area cordoned off from hundreds of other pigs. I looked down and there were two pig skulls, a jaw and a hacked off lower leg, all left to rot in what looked like years-worth of filth. I glanced to my left and the dead, blackened and bloated body of a pig was being pushed and prodded by his cellmates. All were covered in excreta.

One of the most surreal experiences I had was in another shed. This time not crowded at all – quite the opposite. It was an old building festooned in cobwebs; a ghostly, oppressive place where ill animals were abandoned.

One sow was lying on the filthy floor, shaking. I went to her, knelt and whispered soft words, rubbed her tummy and I simply wanted to weep but just one solitary tear escaped.

On leaving Hogwood, my colleague removed empty plastic feed sacks from a massive wheelbarrow. It was piled high with rotting piglets in a sea of writhing maggots… it was the end of our investigation and seemed to embody everything we had just experienced.

Tesco’s callous response to my first investigation in 2017 was shocking. This giant retailer denied anything was wrong with the farm and said: “…Our Agriculture Team, who are animal welfare experts, as well as Red Tractor and the [government’s] Animal & Plant Health Agency have all independently inspected Hogwood Farm to ensure that we are satisfied with the conditions, and that the animals are treated well. I am pleased to confirm that this is the case.”

But perseverance paid off and our third investigation brought victory! The supermarket giant, Tesco finally dropped Hogwood Farm as a supplier, and Red Tractor suspended Hogwood’s certification in response to the hidden camera footage obtained by Viva!.

This news is a huge victory! I cannot express how much this decision means for us, all our amazing supporters, and the thousands of pigs trapped inside Hogwood Farm.

Since our first investigation, the farm owners have invested thousands of pounds into increasing security at Hogwood. Rather than improve conditions for these poor animals, they invested in making it more difficult for the public to see the truth. But Viva! persevered and the final investigation showed all the assurances by industry bodies were false; Hogwood is an abysmal hell hole where cruelty is endemic.

Although I congratulate Tesco and Red Tractor on finally making the right decision, I can’t help but question why it is routinely left to vegan campaigning groups like Viva! to expose the abuse taking place on farms. And why it took three years of investigations for Tesco to act. Factory farming is an inherently cruel business and we hope that this exposé shows that assurance schemes like Red Tractor cannot be trusted. If you oppose animal cruelty, the best thing you can do is go vegan.