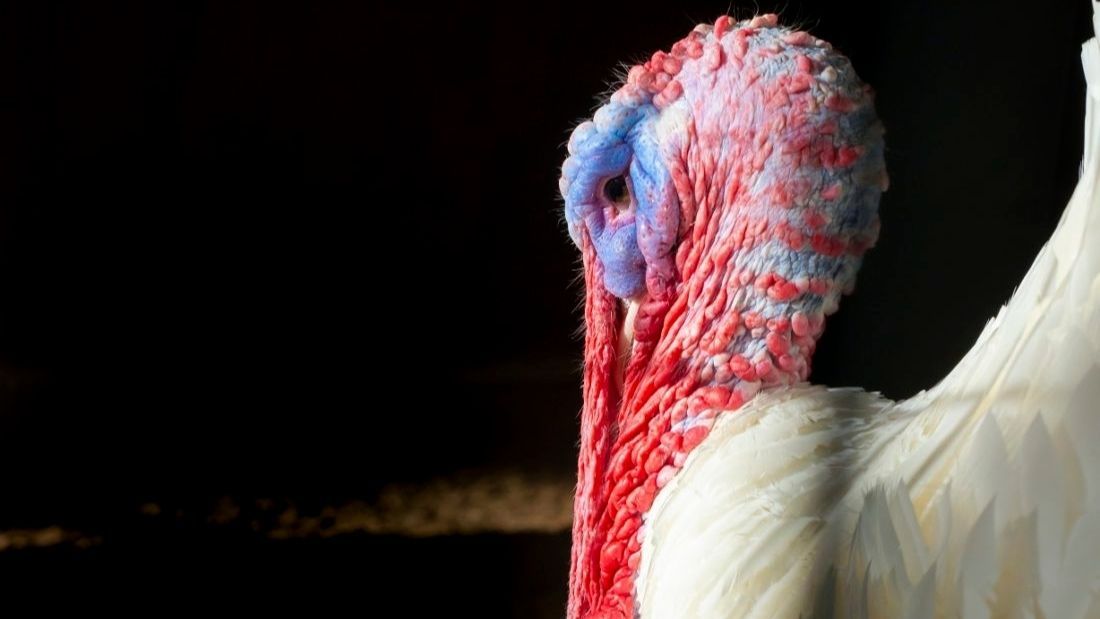 For many British families, Christmas is probably the one time of year they come together to eat turkey. It’s an odd tradition but a staggering number of us believe Christmas is simply not Christmas without a dry turkey roast taking centre stage on the dinner table. But why?

The Origin of the Turkey

Turkeys are not native to the UK. They instead originate from the Americas and were brought over to Europe in the 1500s by Spanish traders. There are six different recognised sub-species of wild turkey – one of which is the meleagris gallopavo, who our domestic turkeys descend from.

It’s claimed that King Henry VIII was the first person to eat a turkey on Christmas Day around 1523, yet it didn’t become widely popular until the 1950s. Up until then, most people would have been eating either geese or wild boar heads, in order to preserve cows for their milk and chickens for their eggs – both of which were much more expensive back then.

Although we’re used to seeing images of the brown or bronze-feathered ‘free-range’ varieties, the turkeys most commonly found in supermarket frozen sections would have had white feathers. This is due to an artificially selected gene which makes the bird’s pin feathers less visible once they’ve been plucked and dressed for dinner. In other words, it supposedly makes their carcasses look ‘nicer’ before they’re eaten.

Like their wild relatives, domestic turkeys are playful and highly social, displaying over 30 distinct vocalisations. These sounds range from gobbles to clucks, putts, purrs and yelps and can carry around a mile in distance! 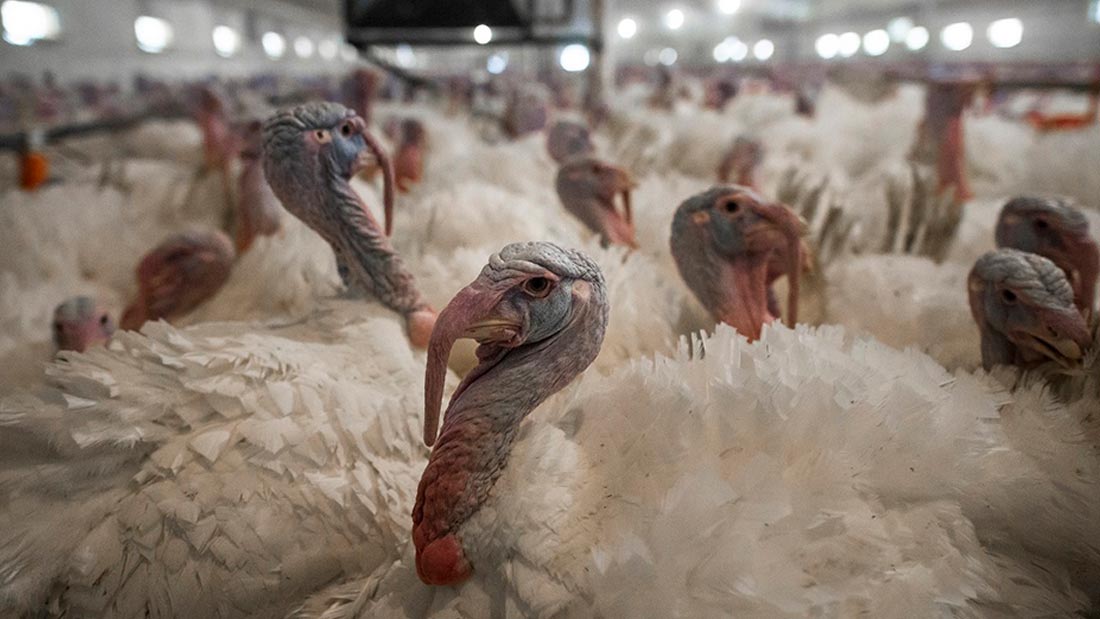 In 2019, the UK slaughtered around 14 million turkeys for their meat. The vast majority of these would have been intensively reared on barbaric factory farms that deny them their natural behaviours, causing extreme stress and unnecessary suffering.

Naturally, turkeys can live up to 10 years of age; foraging on forest floors, roosting in trees and flying (yes flying!) a maximum 55 miles per hour. However, those bred for meat consumption are limited by their abnormally large size and are killed between just eight and 26 weeks old.

Their short lives are filled with pain, misery and a cocktail of antibiotics to curb disease. They’re selectively bred to grow quickly and often suffer from agonising leg disorders, joint degeneration and heart disease as a result. Others die prematurely, due to being unable to reach food and water in the overcrowded sheds – some of which house up to 25,000 individual birds per unit. 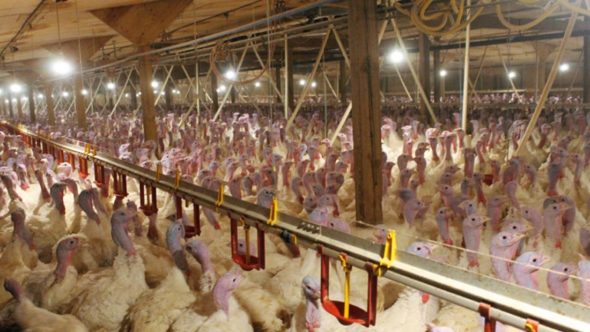 Turkeys packed into a shed at a Bernard Matthews farm

Crowded together in much the same way as broiler chickens, on waste-sodden litter with little to no environmental enrichment provided for them, turkeys experience increased levels of distress. Frustrated by their living conditions, many develop aberrant behaviours such as feather–pecking and cannibalism – despite low lighting used to curb aggression and reduce their activity levels. This often causes growth deformities, and affects their eyes and legs as well.

In an attempt to reduce injuries inflicted on one another, the turkey industry mutilates birds as standard practice. Beak trimming, desnooding (the removal of the fleshy protuberance on the bird’s forehead), dewinging and toe cutting are all procedures allowed under government ‘welfare’ recommendations.

At the slaughterhouse, turkeys are either gassed or hung upside down by their legs and dipped into a basin of electrified water to stun them. It doesn’t always work and some remain fully conscious while their throats are cut. If their main arteries are not severed effectively at this point, others are then boiled alive when plunged into scalding water to loosen their feathers for plucking.

Hidden cameras placed inside the sheds at Gravel Farm, which produces over 33,000 turkeys a year, revealed birds being brutally killed and others suffering from festering wounds caused by feather-pecking, cannibalism and neglect. Never seeing the light of day the turkeys were mechanically fed, watered and continually weighed to ensure maximum growth and profit. 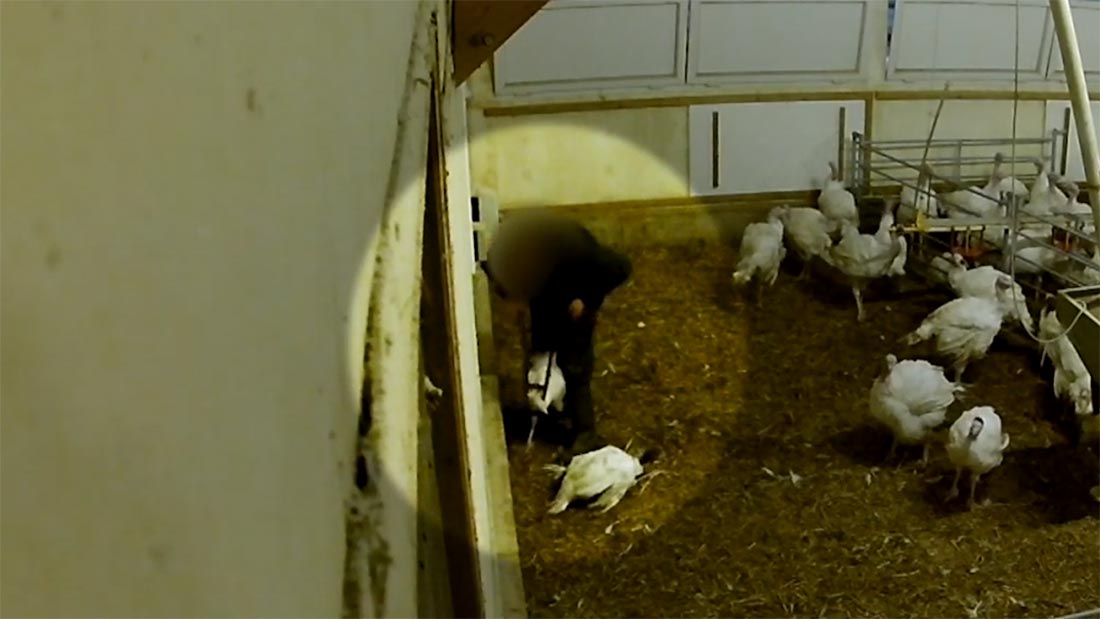 One of the most disturbing and serious malpractices discovered at the farm was turkeys being killed with a neck dislocation device – a plier–like tool that crushes the bird’s spinal cord. It’s a practice prohibited by the Humane Slaughter Association because it does not consistently concuss the brain and is unlikely to cause immediate death. The birds suffered prolonged and visibly distressing deaths, struggling for several minutes after the initial crushing.

Other birds were found with devastatingly bloody wounds caused by other birds pecking out their feathers, which went untreated for a considerable amount of time. This was a blatant violation of Red Tractor standards; which state that sick or injured birds are to ‘receive prompt attention in order that suffering is not prolonged.’ 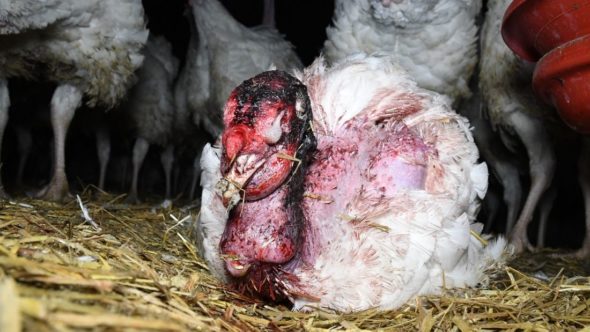 A severely injured turkey waiting to die at Gravel Farm

Despite the huge numbers of turkeys killed each year in the UK, there has however been a moderate decline since the mid-90s and a steady rise in vegan alternatives. In 1997, for example, 40 million turkeys were slaughtered, whereas in 2019 that had dropped significantly to less than half that. With numbers still falling, we may well be gearing up to dump the turkey ‘tradition’ once and for all.

With every major supermarket racing to tantalise our taste buds with their extensive ranges of plant-based products, it’s never been easier to be vegan! So this season, give turkeys the gift of life and choose a cruelty-free Christmas with Viva!.