Home » Blog » Are tea and coffee good or bad for you?

Are tea and coffee good or bad for you? 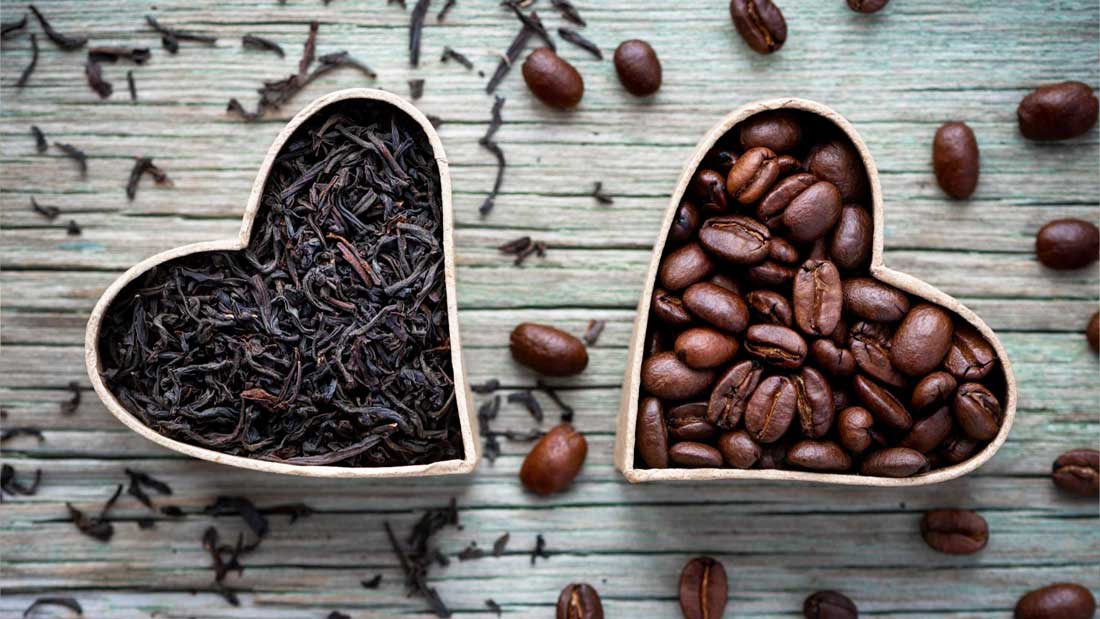 We usually drink coffee and tea to perk up but they are wildly different drinks!

Caffeine is a natural compound found in the leaves and fruits of many plants, including tea, coffee, cacao, kola nuts, guarana and yerba maté.

When the effects wear off, you’ll start feeling tired and hungry because your blood sugar levels have dropped again. This might make you crave more caffeine and sweet or fatty foods. If you can manage these cravings, that’s excellent but if not, you may end up in a vicious cycle, drinking too much caffeine, stress-eating, feeling anxious and unable to sleep well.

People with a certain genetic make-up are more likely to experience caffeine-induced anxiety or even panic attacks, while in others this doesn’t happen.

Physical activity can help you put caffeine to good use – a caffeinated drink before exercise prolongs the time to exhaustion and can speed up your metabolism, helping the body to break down fat faster.

Coffee is the richest source of caffeine and as such it helps to keep you alert but can also cause jitters, insomnia and anxiety. It is a slightly acidic drink, which is why it sometimes curdles your plant milk and can cause heartburn in people prone to it.

On the other hand, coffee contains a lot of antioxidants that have been linked to a reduced risk of several diseases. Some of coffee’s benefits are directly connected to caffeine itself. Interestingly, research shows that coffee reduces the risk of liver cancer, gallstones and even heart failure. Studies have also found that coffee drinkers have a lower risk of developing Parkinson’s and Alzheimer’s disease. These potential benefits are linked only to regular coffee, not decaf.

The tea plant – Camellia sinensis – contains caffeine so any type of tea that’s made with its leaves will contain some. Black tea has the most caffeine, 40-70 milligrams per cup; green tea a little less with 35-45 milligrams and white tea is the mildest with only 15-30 milligrams.

Tea also contains a substance called l-theanine, an amino acid that helps to reduce anxiety, improves your mood and calms you down and these effects nicely counterbalance those of caffeine.

To add another advantage, tea leaves are a rich source of polyphenols – antioxidants linked to many of tea’s benefits. Regular consumption of about two to three cups daily is associated with a reduced risk of premature death, heart disease, stroke and type 2 diabetes.

However, these beneficial effects are only seen with ‘straight’ tea, not when you add dairy milk as the milk protein casein blocks the antioxidants. There’s only a limited amount of data on plant milks and tea but it seems there’s good news for plant-based people as plant milks don’t seem to reduce tea’s antioxidant potential and can even enhance it!

And there’s one more type of tea that’s wildly popular these days – matcha. It’s simply finely ground green tea leaves stirred in hot water resulting in a vivid green beverage. You can drink it plain or add plant milk and sweeteners. Because you actually drink the leaf powder, you ingest a lot more antioxidants compared to brewed tea – in particular, you take in more of the antioxidant called EGCG. According to science, it has strong anti-cancer properties and can even halt cancer growth. Matcha is a health craze worth exploring!

Any kind of herbal tea that isn’t made with actual tea leaves has no caffeine and entirely different properties based on the herbs and spices it’s made of.

Both coffee and tea can hinder the absorption of some important nutrients, such as iron and calcium. It’s recommended that you leave at least one hour between having a meal and drinking tea or coffee.