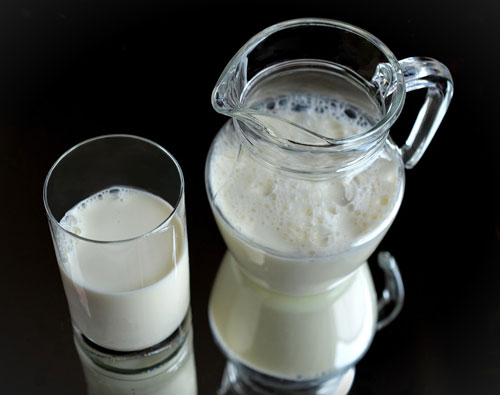 Mahatma Gandhi believed in the principle of ahimsa, which informed his policy of passive resistance towards the occupying British forces during the period leading up to Indian independence.

The Jain religion places non-violence highly on the agenda. Jains believe that animals must not be kept in captivity, starved or treated cruelly. They are vegetarian and some don’t wear leather.

What is Ahimsa milk?

Satish Kumar, Editor-in-Chief of Resurgence & Ecologist Magazine, says: “…many cows can be kept beautifully, kindly and compassionately, and the milk, butter, cheese, ghee, all the wonderful products can be brought to serve the human community without harming, without damaging the animal community”.

This is positioning cows as commodities; they are being kept to serve humans. The male calves are trained to work for humans. This is not in the best interest of the animal. It is not progressive compassion when so many non-animal alternatives to milk and dairy products are widely available.

Ahimsa milk may be even worse for the environment than conventionally farmed dairy milk. Because of their immensely huge numbers, beef and dairy cows, contribute significantly to global warming. They are the world’s single largest source of the greenhouse gas methane, which is 25 times more potent than CO2. If more dairies became slaughter-free, more cows (male and female) would be required to produce the same amount of milk (because they don’t slaughter the male calves). If there were small farms all over the country, producing similar amount of milk as we currently produce, the emissions would be even higher than now.

Methane emissions from livestock have increased over 300 per cent since the 1890s. According to the 2006 UN Food and Agriculture Organisation’s report, Livestock’s Long Shadow, livestock farming is responsible for more greenhouse gas emissions than all the world’s transport – cars, buses, trucks, trains, ships and planes – put together. The best solution is to just stop using animals for milk.

Just at a time when we are trying to reduce global warming and save an endangered planet, Ahimsa milk is not a sustainable option. It’s better to continue promoting plant milks that can be produced at a fraction of the cost to the environment and avoid all animal suffering.

milk contains a cocktail of at least 35 different hormones and 11 different growth factors. All occur naturally in milk to drive rapid growth, turning a new born calf into a cow in just one year. Human babies develop much slower as the energy from their food goes into fuelling brain development. The hormones in cow’s milk have been linked to certain cancers including breast and prostate cancer. One in nine men in the UK now get prostate cancer and one in eight women get breast cancer.

Drinking milk from a mother of another species is bizarre to say the least! Humans have only been doing it for a few thousand year – very recent in term of human history. Furthermore, not drinking milk is the normal sate for most people; 75 per cent of the world’s population are lactose intolerant and can’t digest the sugar in milk – it makes them ill.

Breeding cows for milk is not necessary. The plant-milk market is booming and the new wave of vegan cheeses made from nuts using traditional fermentation methods look amazing. There has never been a better time to go vegan!

Ultimately, drinking any type of mammalian milk remains the exploitation of another animal – the cows don’t give their consent to be impregnated and have their milk taken from them. For the sake of the animals, the planet and health (see the White Lies report) Viva! continues to recommend a vegan diet to all.