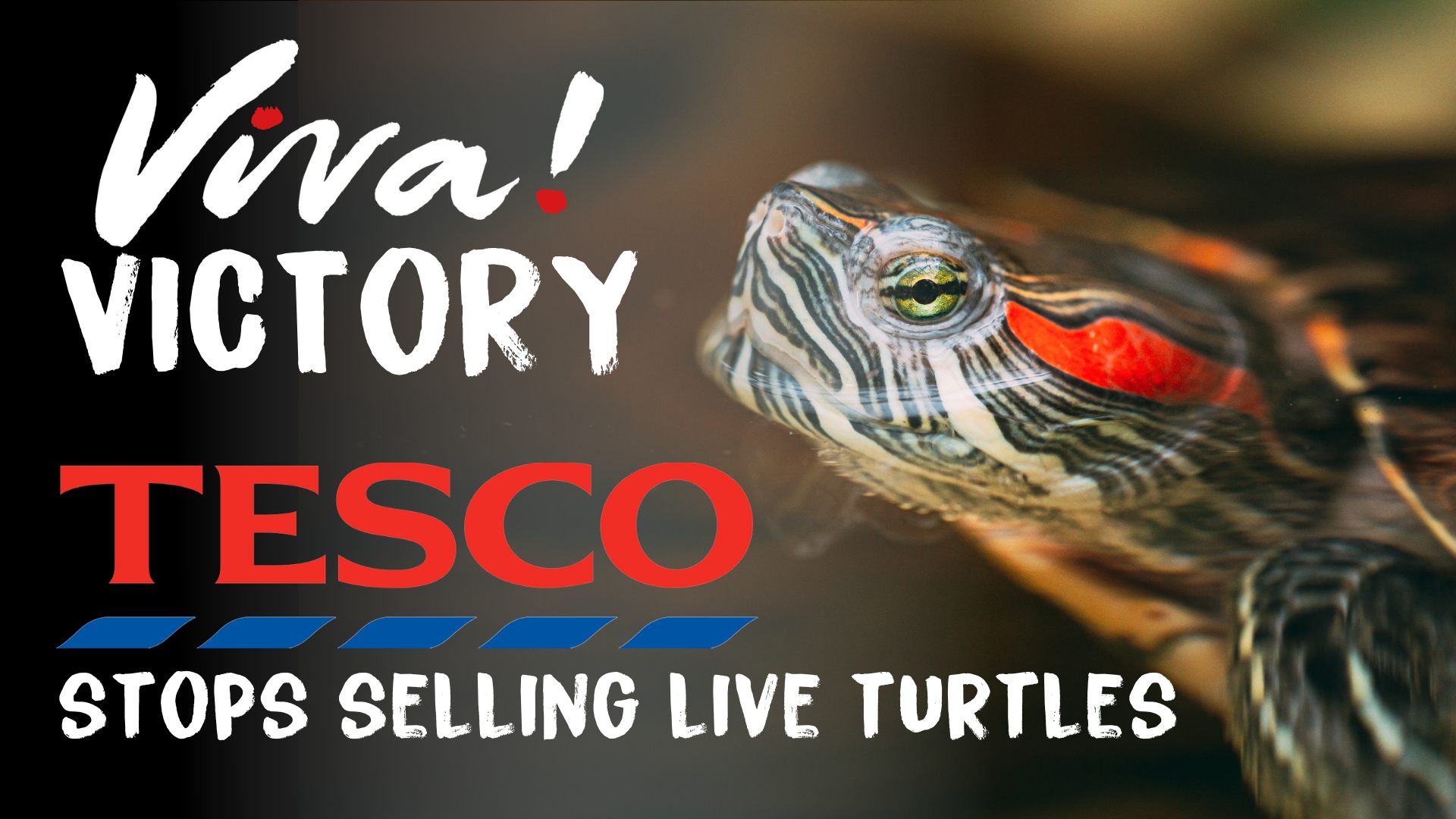 Tesco has confirmed that it has stopped selling live turtles in its stores in China! This comes after a long, 8 year campaign by Viva!. Thank you to everyone who has written to Tesco and helped secure this important victory.

We say: “Tesco previously ignored reptile experts’ evidence of cruelty and statements that the trade in turtles contributed to the decimation of wild stocks.  This cruel trade in live animals would have never been acceptable in Britain, yet presumably these profits came back to fill Tesco’s coffers in this country. So we welcome the chain finally making the ethical move to stop selling live turtles in their stores in China. It shows that sustained consumer pressure really does work.”

Tesco was putting profit over principle. We are delighted that they have changed their mind after you told them to stop.

About the Tesco Tortures Turtles campaign

When Tesco bought the Hymall chain of 39 supermarkets in China it continued the store’s policy of selling live turtles. Its sales assistants kill them to order or sell them live for their customers to butcher any way they choose.

Within weeks of Viva! announcing our Day of Action on July 14, Tesco have withdrawn red-eared terrapins because they now agree that a “humane killing method cannot be achieved”. Hardly a co-incidence! However, Tesco appear to be adamant that they will continue to sell Chinese soft-shelled turtles despite many of the same problems existing. Also, it is reasonable to assume that they will now be selling more soft-shell turtles to make up for it. This isn’t progress – it’s more like moving the goal posts.

Whilst Tesco are no longer selling red-eared terrapins, we still have very great concerns about the way that Chinese soft-shell turtles are killed. Tesco has announced that they will still be decapitated (without pre stunning), the head will then be crushed (possibly using a hammer). One of our greatest concerns about this trade was that, because of their slow metabolism, a turtle’s decapitated head could survive (and be conscious and in pain) for up to an hour after slaughter.

This amended slaughter method is not only horrific, but it is also possibly imprecise – meaning that a turtle may be hit repeatedly before being finally killed. This is not the answer. The only way Tesco can wash the blood of these turtles off their hands is to take the one and only ethical choice there is: walk away from the trade in live animals in China.

Previously, with red-eared terrapins, if they could persuade the turtle to pop his head out of his shell, they chopped it off. If he wouldn’t, they would smash open the shell to get at it. Once severed, the head can live for up to an hour.

The live turtles people take away may also be boiled alive, have their shells sliced off and organs and fat cut out leaving the animal still alive and in agony. Tesco have told us that they may start a “customer awareness campaign” for turtles taken home alive from store. This is a half-hearted measure – and one which will leave turtles at significant risk of suffering at the hands of those with no experience of slaughter.

How does Tesco excuse their actions?

They say: “Animals are killed immediately to minimise the risk of suffering.”

No they’re not. Experts agree – it is almost impossible to kill a small turtle painlessly because of its slow metabolism and ability to live on very little oxygen. As detailed above, crushing of the head may be an imprecise way of killing a turtle, which may take several excruciating attempts to succeed.

They say: “We comply with all the standards set in China.”

That’s easy – there are no welfare standards.

They say: “They are not caught in the wild and are sourced in a sustainable way.”

This makes the barbarity acceptable? Experts maintain that most turtles sold are wild caught and merely ‘laundered’ through turtle farms. Between 1996 and 2000, 25 million turtles were exported to China from the US – most were wild caught and many were bought by turtle farms. A further 12 million wild turtles are caught for the food trade every year in China.

Tesco know the situation because some of the biggest wildlife organisations have told them – WWF, WSPA, Wildlife Conservation Union, World Conservation Union, Traffic International, Care for the Wild and the Tortoise Trust. They’ve chosen to ignore them all.

They say: “It would be wrong to impose our values on other countries.”

So presumably we can look forward to Tesco Rwanda selling gorilla and chimpanzee bush meat?

Viva! agrees with the Tortoise Trust when it says: “We find Tesco’s attitude ethically repugnant and morally bankrupt.”

Hundreds Out on the Streets for Tesco Demos

Over 160 peaceful demos took place outside Tesco stores on Saturday 14 July 2007, with around a thousand people calling for them to stop selling live turtles in their Chinese stores. Thank you to everyone who took part! Despite the completely unrelated security scares (which are reportedly financially motivated) the public were overwhelmingly supportive, and many pledged to lend the campaign their support.

The response of the street was astounding. Kelly held a demo in central London, she told us:

“The demo went really well on sat. I had over 20 people turn up and I sent some off to do another two stores, so we covered 3 stores in central London. We stayed until we had handed out all the leaflets, which only took 2.5 hours. People were very responsive and we gave out all the postcards and spoke to a few people. There was also a new girl who hadn’t done any activism before and she was keen to get involved so I let her know about everything happening in London and the date of the next London Animal Rights meeting. So it was a very positive day.” Judi from North Wales told us, “Hope you had a fantastic response all over Britain to your campaign, as we did at our local Tesco.“. Ursula in Solihull said, “We actually did two demos; one at Monkspath and then another at the slightly smaller Tesco store in Hall Green. Pretty well everybody was very supportive.”

Viva! has been working with other animal welfare groups and, since we became involved, Tesco have bowed to this combined pressure by stopping selling all but one type of turtle: the Chinese soft-shell. However, they are still killed to order by chopping off their heads – and because it can take up to an hour for them to die Tesco now ask for them to be hit with a hammer until they are dead. This is an imprecise slaughter method which can still result in great suffering. Others are sold live to customers, who take them home to butcher any way they choose.

The Day of Action and resulting press coverage – which has seen the plight of the Tesco turtles featured in the Evening Standard, The Daily Mail, The Times and most national, and many local, newspapers – has sent a very loud message to Tesco: animal abuse is animal abuse no matter where it happens. 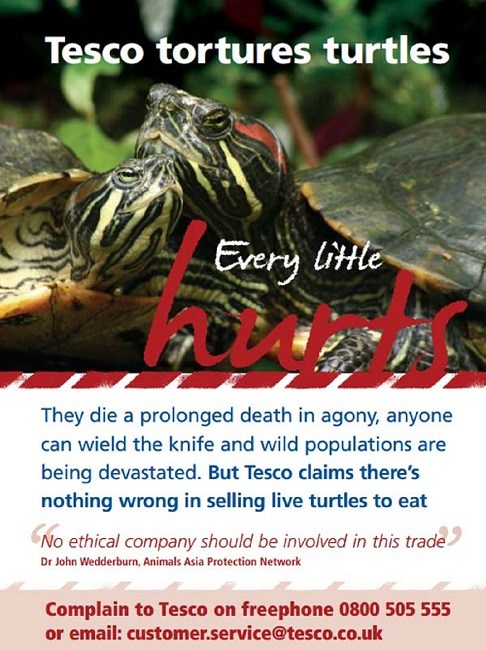 The leaflet below is for archive purposes only. 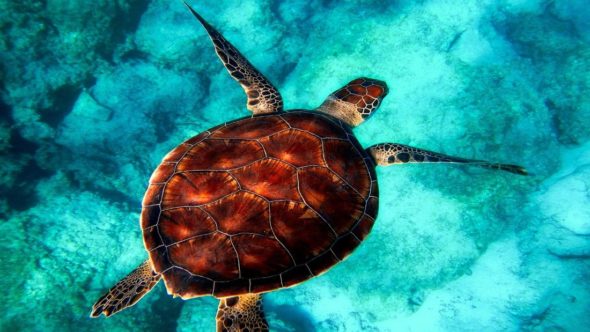 Turtles are fascinating, ancient, wonderful animals – critical to their ecosystem. Tragically they are still traded worldwide for their meat, eggs, skin and shells – and as pets. At least 60% of turtle and tortoise species are either vulnerable, endangered or critically endangered.