Scapegoated by the UK government badgers are being blamed for the spread of bovine TB in cattle and as a result culled from the countryside in shockingly high numbers. However, at three Welsh markets we covertly filmed an appalling disregard for biosecurity – failings, along with the intensification of the cattle industry, that may well lie at the real heart of the problem.

“The risk of disease being spread when animals are gathered from different places is high. Good biosecurity is an important part of preventing the spread of disease at animal gatherings” – Welsh government.

At Carmarthen Market we filmed for over an hour and a half and documented 97 per cent of people ignoring the blue disinfectant foot bath put there to stop the spread of diseases, including TB. Despite walking through areas where animals were gathered only seven out of 277 individuals bothered to observe even the simplest of biosecurity measures put in place to stem infectious outbreaks.

At Whitland Market there was no biosecurity measures in place as animals were unloaded, even though it was a TB/Red Market where TB infected animals are traded for slaughter.

When asking an Animal Health inspector on-site why there were no foot baths we were informed that workers had just been told to bring some. The inspector then went on to make a shocking confession about poor biosecurity at Carmarthen Market:

Cardigan Market is within the Intensive Action Area where badgers are earmarked for slaughter. One of the concerns we raised with a worker there was the extent of ear-tag swapping and how that impacts TB monitoring. He informed us that there is indeed a “fair-bit of it going on”. Although he was talking about sheep tags, the worry is that the practice is widespread amongst cattle farmers as well.

Swapping ear-tags to retain high milking cows with TB not only puts the whole herd at risk but also cattle nationwide. 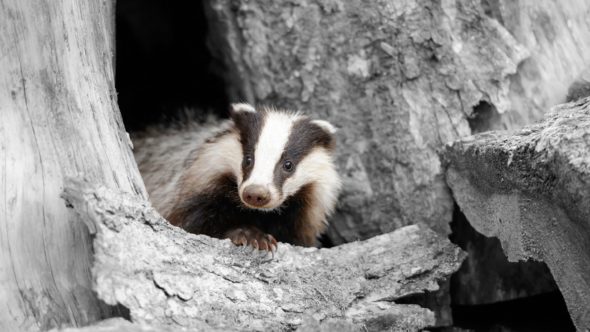 Badgers are needlessly being killed in a flawed attempt to protect a cruel and unnecessary dairy industry. Viva! has been fighting the badger cull since day one.