No Porkies: The Pig Industry

Could You Eat The World's Smartest Sandwich?

There are one billion pigs in the world at any one time, but how much do we actually know about one of the world’s most eaten animals?

Descended from wild boar, a domestic pig’s natural lifespan is around 20 years.

Pigs outsmart dogs any day, they love being with other animals and really like to play. Studies have shown they can even play simple computer games! From just two weeks old they can they recognise their own names and run to their mother’s voices.

A pig’s snout is highly sensitive – developed for smelling, carrying, pushing, rooting and interactions with other pigs. Pigs are naturally very clean and don’t defecate where they have to live because they don’t like getting dirty. Pigs can’t sweat – they have almost no sweat glands! They keep themselves cool by rolling in mud and need a constant supply of fresh, moist air and drinking water.

Do you love pigs enough not to eat them?

What happens to pigs in factory farms?

Piglets are slaughtered for pork, sausages, pepperoni and bacon between five and six months old. Sows – mother pigs – are killed for low-grade meat at three to five years old.

The vast majority of young pigs live in filthy, barren cells with slatted wooden floors, where they can’t root or perform many of their natural behaviours. Grossly overcrowded, and without mud or fresh air to cool them, they can become heat-stressed and collapse.

A sow is imprisoned in a farrowing crate –  a metal-barred pen so small she can’t walk or turn around. She’s locked in there one week before her babies are due and stays there for 28 days, when her piglets are taken from her. It happens every five months and some mothers literally go crazy.

Disease is common in factory farms, leading to an overuse of antibiotics, a major threat to humanity. Nearly a half of all antibiotics in the UK are used in farming – the majority being given to pigs.

Are you willing to see the inside of a pig farm for yourself?

Take the Face off challenge

Find out more about pIgs

The great news is, you don’t have to be a part of this cruelty. In fact, you can live a kinder, healthier and more environmentally-friendly lifestyle by choosing vegan instead!

There has never been a better time to go vegan. With a rapidly growing number of vegan options on every high street, it has never been easier to transition to a vegan diet.

There’s no time like the present! Join the thousands of others around the UK and sign up for our 30 day vegan challenge. Our completely free app provides everything you need to go vegan, from delicious vegan recipes and meal plans, to nutrition advice, health information and inspiration. It’s also available as daily notifications or email alerts.

Know someone who should go vegan? You can get your friends and family involved in the vegan revolution by simply adding their details to our 30-day vegan sign up form. 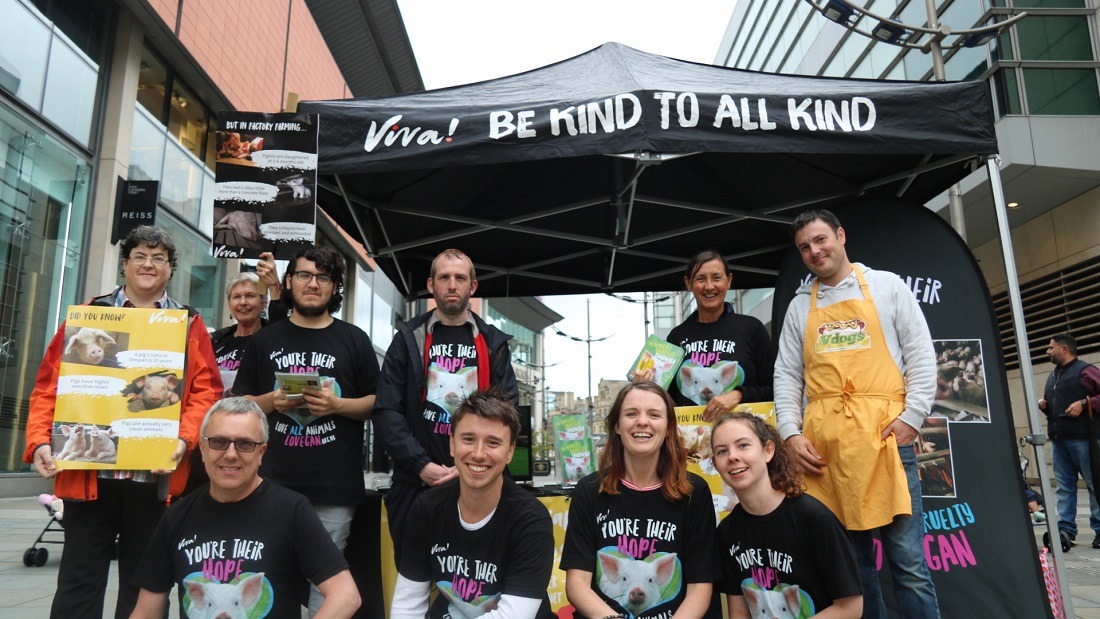 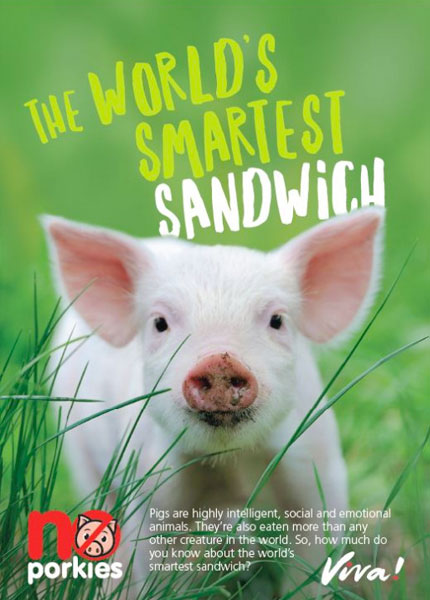 After a successful year of running No Porkies street actions nationwide, we are looking for volunteers to run their own events in their local areas.

If you would like to run an outreach stall in your local city, town or village then please get in touch with campaigns@viva.org.uk. We can offer advice on all aspects of street activism from what samples to offer, to the best way to talk to the public.

You can order our campaign leaflet ‘The World’s Smartest Sandwich’ for door/bus/cafe dropping, street outreach or as an educational resource. The two- page A5 leaflet educates on the amazing qualities and intelligence of pigs, alongside the reality of how they live in factory farms, promoting veganism as a healthier, kinder and more environmental lifestyle choice.