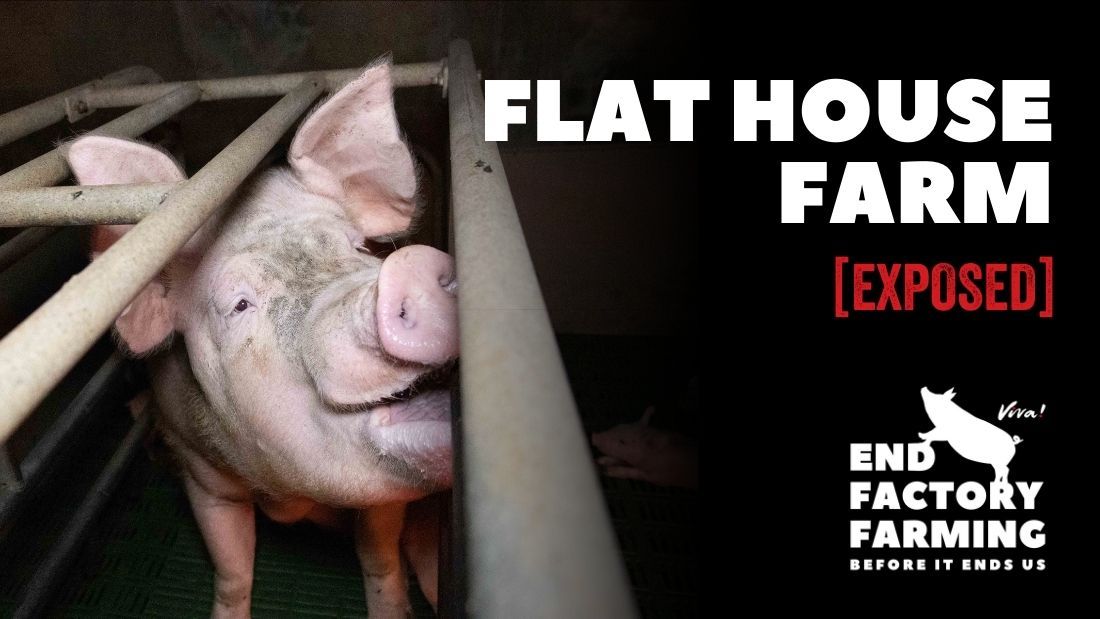 Red Tractor suspends Flat House pig farm in Leicestershire, claiming to be ‘appalled’ by barbaric conditions captured by undercover investigators for Viva! Campaigns. The disturbing footage highlights a clear lack of care for severely sick and dying animals, housed in squalid conditions that pose a serious public health risk. The investigation took place over the course of four months and made use of hidden cameras to capture shocking scenes inside the sheds. More images from the investigation can also be publicly viewed on Flickr.

Flat House is a farrow-to-finish farm housing up to 8,000 pigs and 800 breeding sows.

Undercover investigators captured a catalogue of disturbing scenes and used hidden cameras to film some of the farm’s handling practices.

The team discovered animals had a range of serious ailments causing acute pain – including bleeding hernias, prolapses, deformed trotters, rectal strictures and pot bellies. Other animals were covered in lacerations and grotesque bites, injuries inflicted on them by other pigs who are driven to insanity by the barren environment.

Across the farm dead and dying animals had been pulled into the walkway, left to slowly die and rot instead of being treated or collected and temporarily stored in leak-proof bins with lids – a serious violation of the government’s guidance on how to handle fallen stock. There were jaw bones and bodies piled up in various locations across the site.

One particularly sick animal, who was severely bloated, had been left in the walkway with no access to food or water – other than that that was dripping down the walls during a rainy evening. This is in clear breach of UK government guidelines which state:

Drinking water must be continuously available along with feeding facilities which can easily be accessed by all pigs.

Vice lesions such as flank, tail and ear biting were found to be widespread on the farm and did not appear to be effectively managed. Pigs left suffering with acute malnutrition and severe enteritis were experiencing long-term health conditions that take time to develop – indicating that they had not received adequate veterinary care, causing unnecessary suffering for the animals. 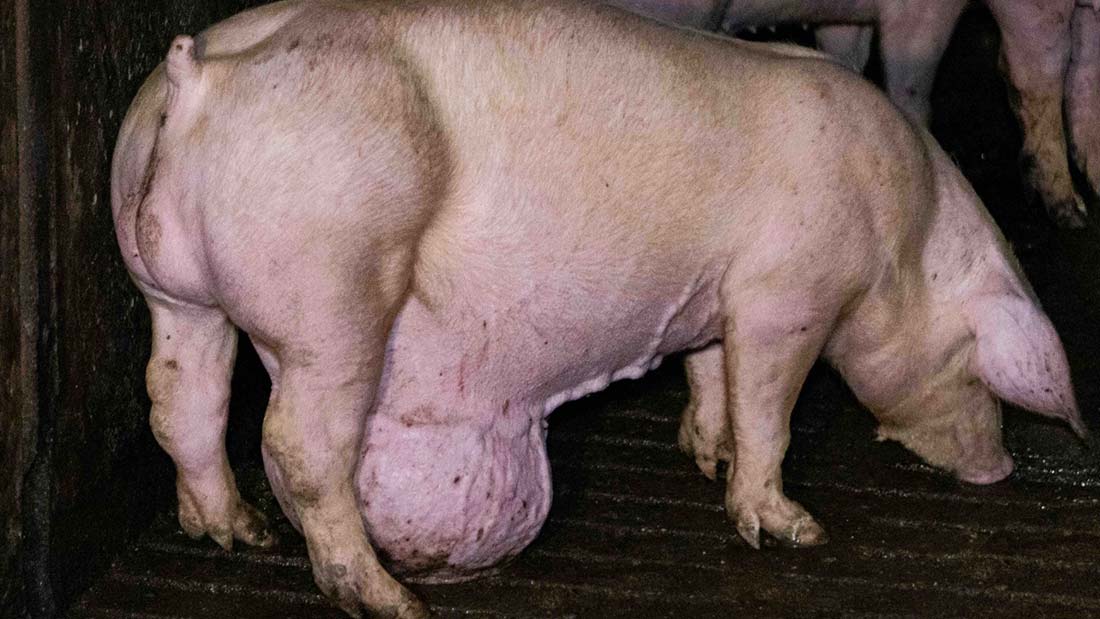 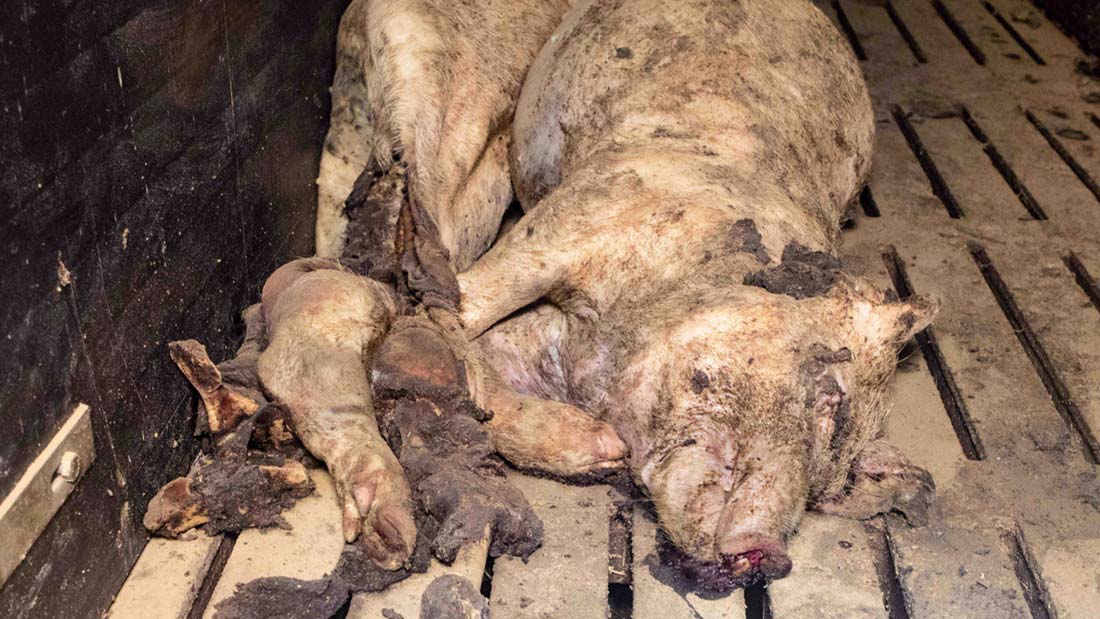 Workers were also captured carrying out routine mutilations. Each newborn piglet is pulled from their stall and dropped into a metal shopping trolley before having their tails and teeth clipped with pilers – all without pain relief. These cruel acts are supposed to prevent tail biting, a behaviour that manifests from stress and lack of stimulation.

One of the most distressing scenes captured by Viva! Campaigns shows a farm worker ‘knocking’ young piglets – killing them by slamming their tiny heads onto the bars of their mother’s metal cage. A brutally cruel act which is followed by the worker dumping the bodies aside and exclaiming “I f****** hate doing this!” 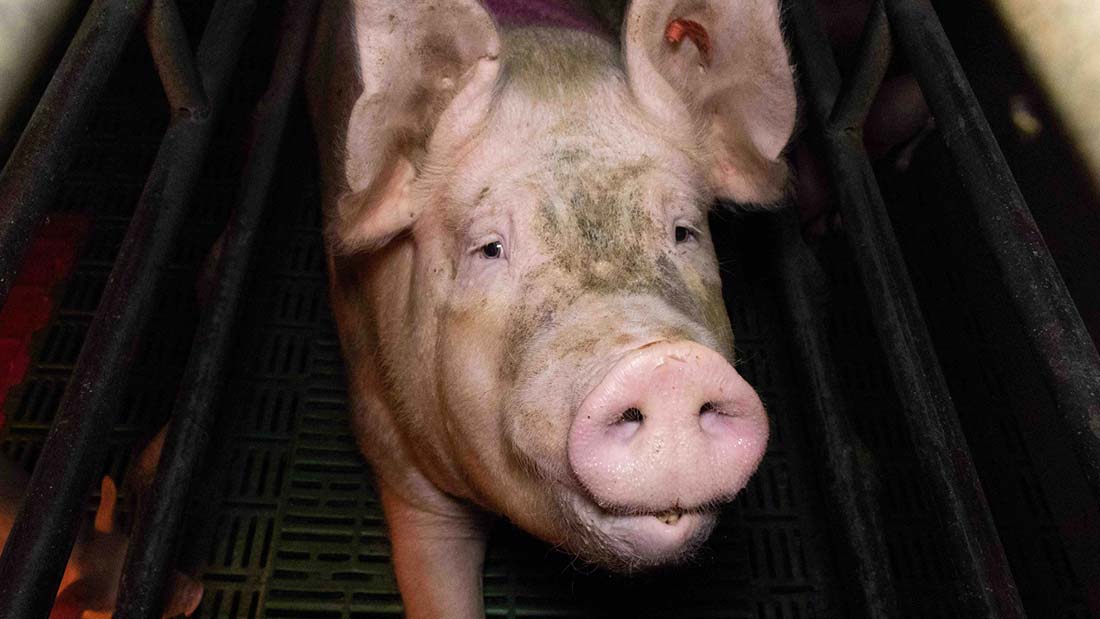 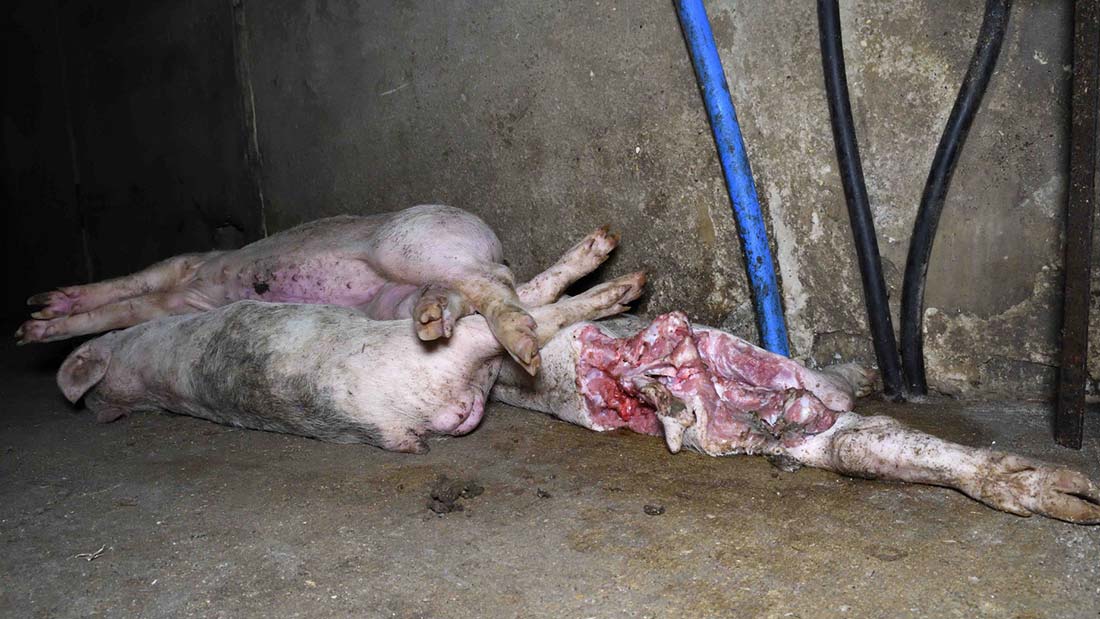 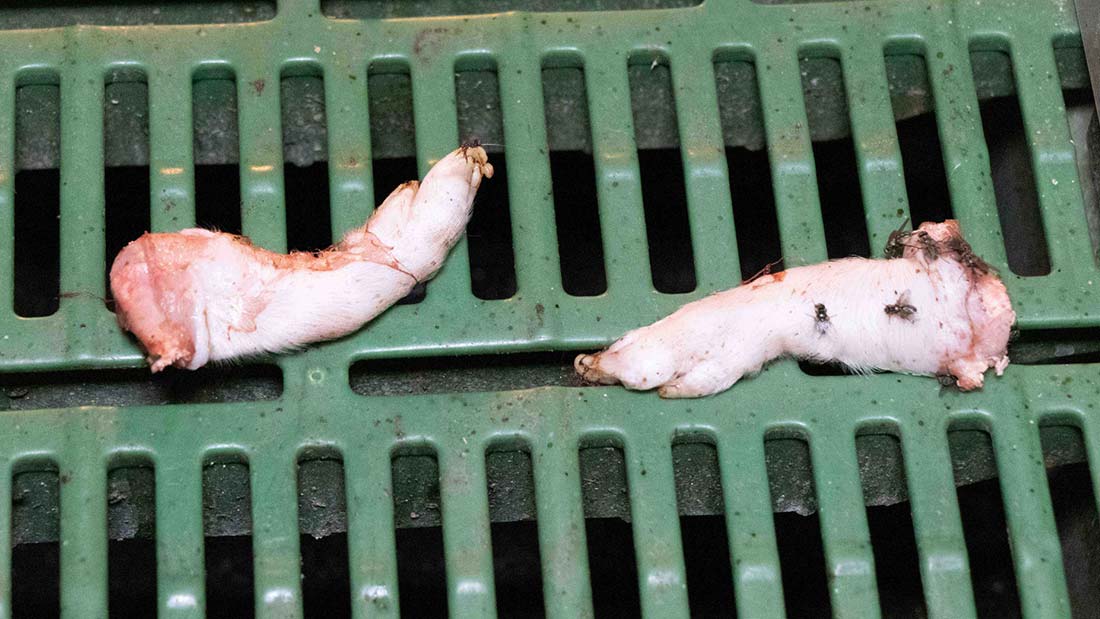 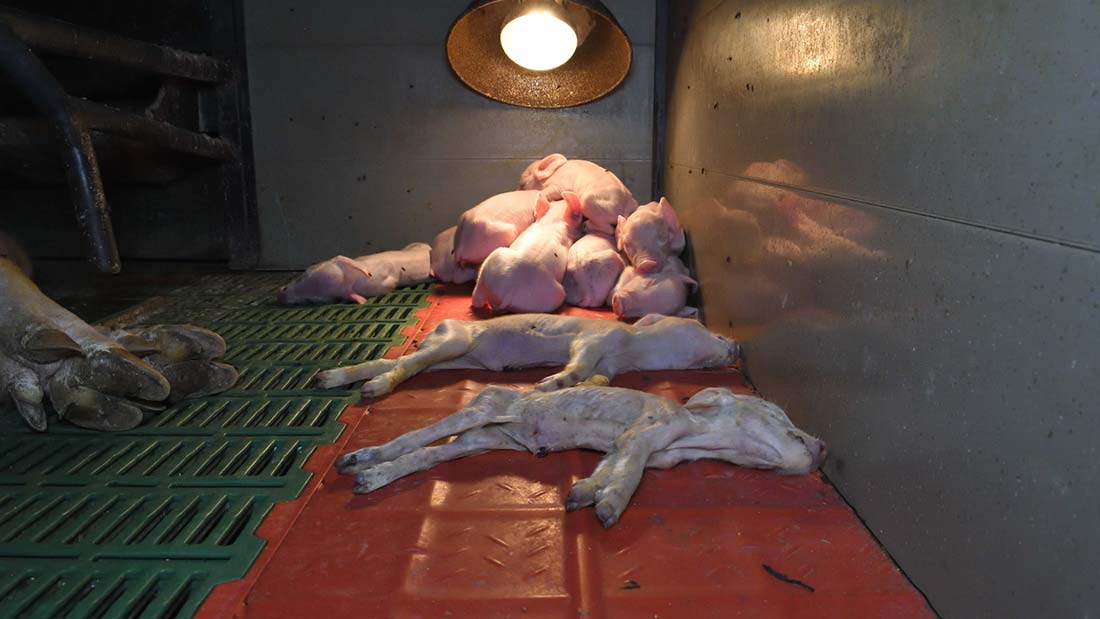 Feral cats Pick off the Weak

Dismembered body parts were found on every visit, as well as numerous dead piglets alongside confined sows. Hidden camera footage from the crates captured cats picking off sick piglets, eating them alive and dragging their limp bodies into the walkways to feast.

During each pregnancy, sows at Flat House Farm are confined to a barbaric farrowing crate for five weeks at a time. Four of which are after she gives birth, restricting her natural maternal instincts to physically bond with her young. These cages are widely used on British factory farms and are entirely legal.

Fly infestations were found throughout the farm, leaving feeding troughs covered in maggots. The entire site is dilapidated, unsanitary and covered in filth. On factory farms like Flat House, animals are crammed together in appalling conditions, allowing for infections to spread and mutate with ease.

Do you use social media? Use our graphics below to change your Facebook and Twitter cover images and help spread awareness. 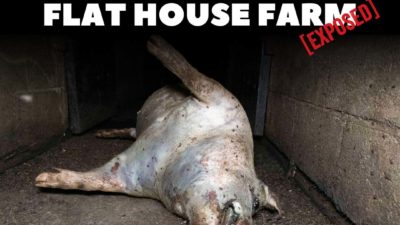 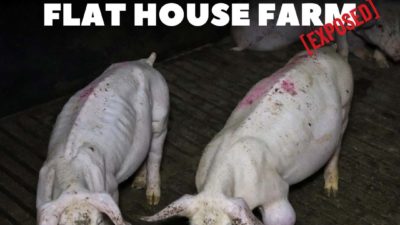 Copy the link below into the status bar on your social media accounts, email to a friend or anywhere else where you want to share the link.

Join us in calling on Prime Minister Boris Johnson to End Factory Farming, Before It Ends Us.

Daily Mail [Exclusive]: Starving pigs are caught on film resorting to cannibalism in a shocking catalogue of neglect unveiled at ‘high standards’ farm 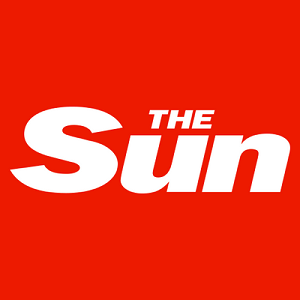 The Sun: LEFT TO ROT, Starving pigs ‘forced to eat each other in shocking catalogue of neglect at “high standards” farm’ Meaww: Starving pigs forced to eat each other while sows writhe in pain at farm known for high animal health standards 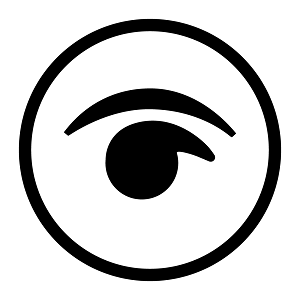 Listen to the full interview in our September 2020 episode.