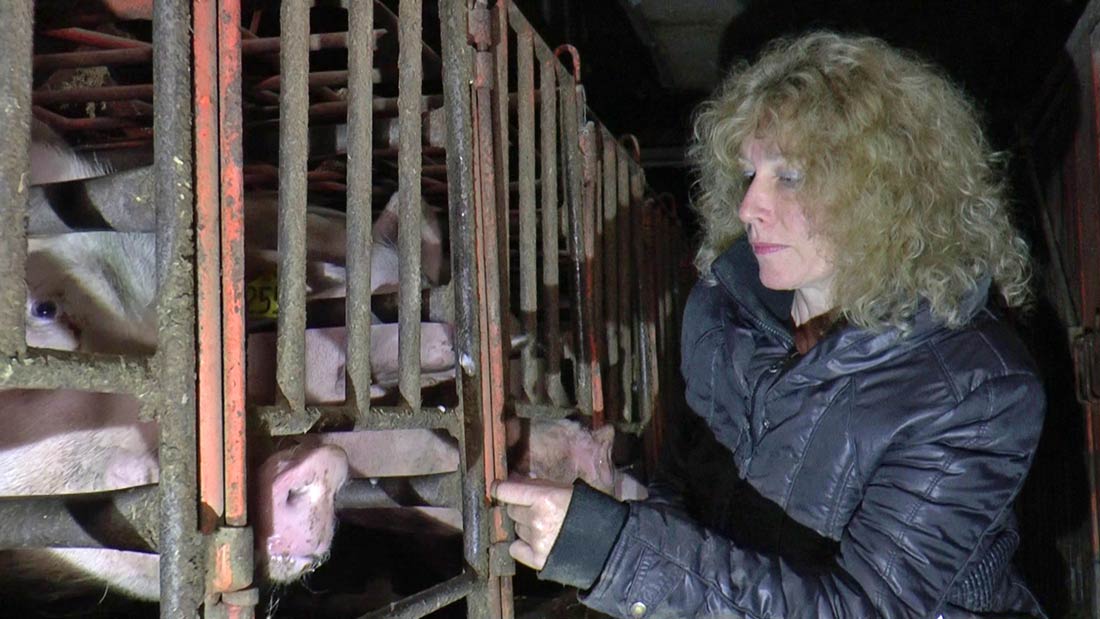 My Face Off Challenge

A personal story of how it feels to go undercover, by Viva!’s founder & director, Juliet Gellatley

In the dead of night

I don’t find investigating factory farms easy. It doesn’t matter how many times I have clambered over fences in the thick of night drawing towards some ominous concrete ugliness, I always feel a sickness in the pit of my belly. It’s not just the thought of confronting what our species do to the animals inside the sheds, it’s because I’m frightened for me, and my friends, safety. I’m not that brave.

It has meant though, that I’ve looked into the eyes of the animals who are incarcerated. Who have known nothing but a life of relentless, gnawing pain and utter frustration. My only hope is that by exposing the reality of these hellholes, people change.

After a tip-off about appalling conditions at a pig farm, Necton Hall, Norfolk, we visited in the black early hours of the morning. The doors of the first shed we came across were wide open and the lights had been left on. I walked inside, followed by a cameraman, to be filmed about the desperate life of pigs. It was one of the most difficult experiences of my life.

The shed was filthy and drab, festooned in cobwebs. A corridor ran through it, with mother pigs locked in crates on both sides. I stopped by one and looked at her abused body lying on a hard and unforgiving floor. “503” was crudely painted on her back. She looked at me, then at her dead piglet, who she nuzzled through the metal bars that imprisoned her. In her eyes ran a story of emotional and physical pain. An animal completely neglected by society. Left to be exploited over and over by a nation we like to pretend is civilised. Yet how many times had she been raped, made pregnant, given birth and had her babies stolen from her in this hell hole? 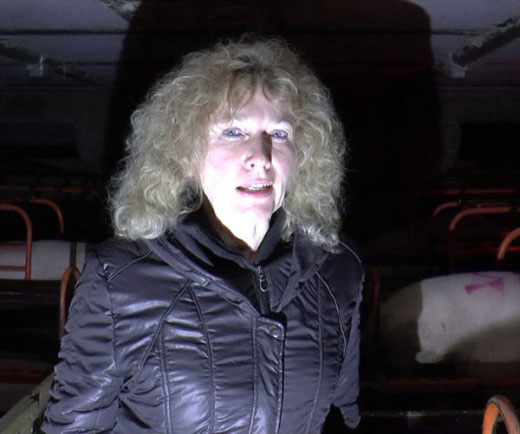 Birth is magical. But not when it takes place in a cage like this, only inches bigger than the mother’s body. What should be beautiful and rewarding becomes horribly obscene. To me, this cruelty and deprivation is unbearable. Eating animals is wrong. If we have no empathy with them or compassion – what does that say about the human race?

Necton Hall Farm is massive. Seemingly without a sense of irony there is a sign at the front telling visitors that they are entering a ‘sterile environment’. It would be difficult to imagine a less sanitary place.

In another shed, pig faeces littered the gangways that separated the pens of the older pigs that had been moved into groups after forcible and early weaning.

Pigs are highly intelligent animals and farmers are required to give some kind of ‘environmental enrichment’. It was a sick joke that these beautiful animals were crammed into dirty, wooden-slatted pens, with no bedding – given absolutely nothing – except a ball. Pigs are meant to spend their days exploring their woodland homes, snuffling for food, playing with family. They roam 2 to 15km a night. They are fun loving, sociable animals full of joie de vivre. In this place, the small piglets already had despair stamped in their expressions – here there was no play.

It wouldn’t happen in the wild, but sometimes pigs on intensive farms resort to cannibalism. One terrified animal lay at the back of a pen unable to move, as another chewed on his leg. His pain and terror must have been unimaginable. The image of this one pig’s face still haunts me. Elsewhere a pig had died and, driven by boredom and the madness of confinement, some of the other animals had ripped his thigh open. It shows utter contempt for these animals, that the farm workers had not bothered to remove the dying and dead.

One of the worst scenes was the sows in ‘rape racks’ which constrained them so tightly they were almost immobilised. Sows are not meant to be kept in these crates for long periods of time. Yet we filmed this heart breaking sight at around 3am. Who knows how long they were left here? One female deeply upset me, she still had fight in her. She was trying to escape and I walked to her and tried to soothe her. Her eyes were a beautiful pale blue and so I named her Blue. Her look will stay with me forever.

In the last shed was another reminder of the horrors that the meat industry inflicts on defenceless baby animals. On the floor of this shed lay the severed tails of piglets who had been mutilated by the farmer. Lying next to them were the discarded bodies of four piglets who didn’t even live long enough to leave the farrowing pens.

It’s tragic that any animals are exploited and abused for food. The scale of suffering is unimaginable. But the answer is in each and every one of us. We can change ourselves and those around us. We can show that veganism is a positive force for compassion and any step in the right direction is one very worth taking.  For the sake of animals like Blue. 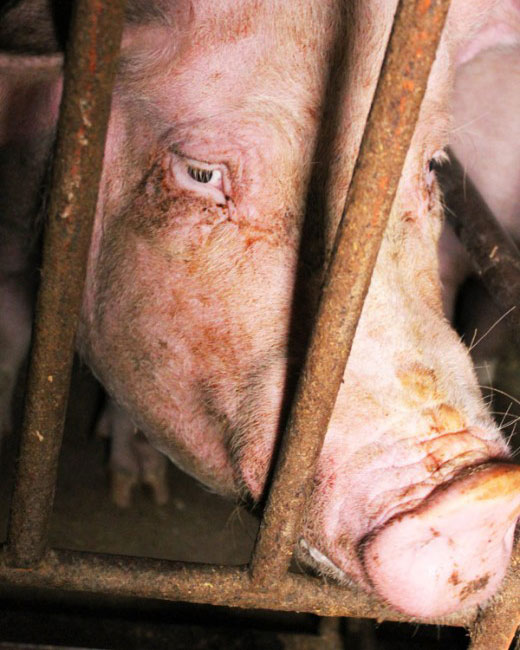 Face Off is a nationwide campaign that challenges the British public to open their eyes to the realities of how animals are factory farmed. Take the challenge and watch our videos!