Home » Animals » Animal Campaigns » Face Off: Dairy » Punished for Being a Mother

Punished for Being a Mother 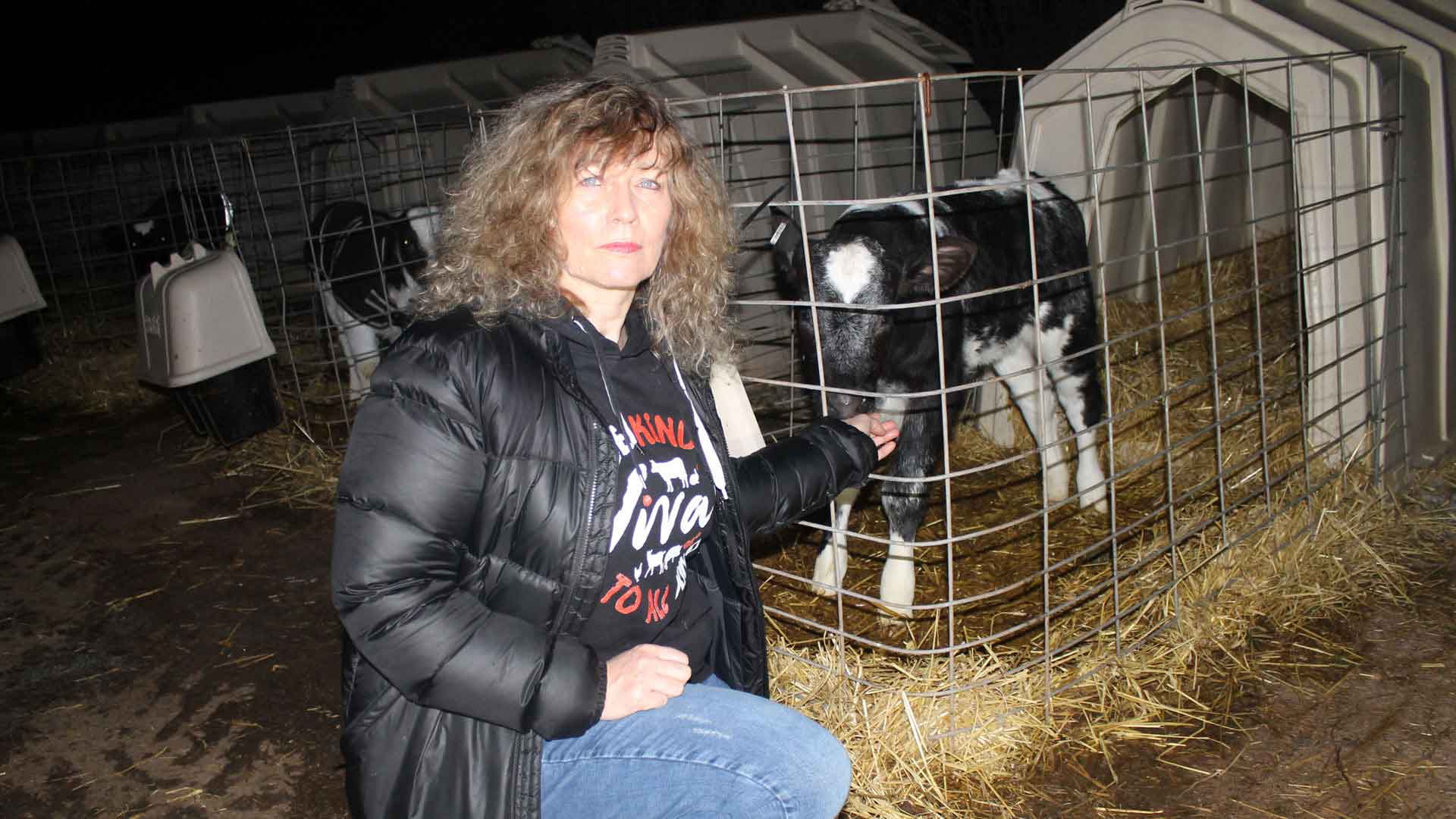 A personal story by Juliet Gellatley, founder & director of Viva! who goes undercover and discovers that there is suffering in every glass of milk.

Everyone reading this has, or had, a mum – and many of you, like me, will be a mum. The mother-child bond is magnificently fierce and the love unconditional.

The whole process of becoming a mum is magical, miraculous. Throughout the nine-month pregnancy you feel your baby slowly growing and powerful feelings develop for him or her (or them, in my case!) that are hard to put into words. Everyone’s instincts, mother or not, is to protect the very young and defend them from suffering.  Well, not quite everyone!

I began Viva!’s dairy investigations with a heavy heart for the simple reason that the dairy industry’s thrives on – depends upon – twisting and destroying motherhood, abusing and distorting it for money. 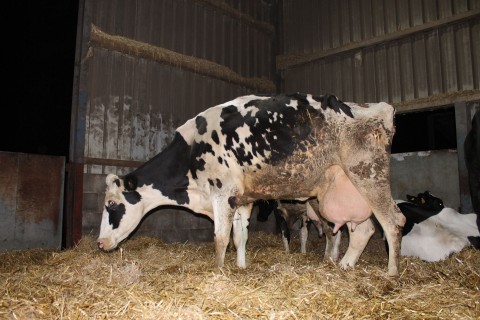 A drive through the dark down narrow country lanes led us to Halswell farm in South Devon. Despite being the early hours, there was plenty of activity. A quad bike zoomed past us and then a car stopped nearby… my heart raced and I knew that with so many people around we would have little time to film. I and my intrepid team clambered over a gate and then a wall before entering a dairy shed that was divided into two areas – mums and mums to be.

The idyllic image of dairy farming that has been purposely fostered was shattered as an emaciated cow, bedraggled and depressed, limped by me, her head hung low, barely able to walk. She was one of the saddest souls I’ve ever met. Her pelvic bones and spine starkly protruded from her wasting body and she had clearly been a long time in decline – almost certainly left to struggle on because she was still producing a profitable amount of milk.

Next to her was a cow with udders so pendulous and unnaturally full that her hind legs were forced apart and she walked with a painful gait.

In another shed, a sense of neglect hung thickly in the fetid air. One poor animal had a protruding, bright blue eyeball with no iris, a product of severe pressure producing acute pain.

One cow was lying in the straw and I could barely believe it – she was giving birth. Bitter-sweet feelings flooded my heart. Like us, this mother had gone through a long, nine-month pregnancy and here was its culmination – her baby. I felt a wonderful warmth as I was privileged to witness this miracle as the little calf, perfect and beautiful, appeared from her into the world. And then came the nausea – I knew that within a couple of days, her baby would be stolen from her.

The awful reality really hit home – the dairy industry is predicated on stealing babies from their mothers. We have no right to do this; it is abhorrent, shameful, disgusting and I will do all I can to expose it. All farms do it – extensive ‘free range’, zero grazing or organic – it is their modus operandi.

The dairy industry’s business plan is simple and deadly. Impregnate cows through artificial insemination. Take the calves away almost immediately after birth and extract every drop of the cows’ milk for human consumption. Selectively breed cows so that they produce 10 times more milk than is natural. Kill them for cheap meat when they are worn out after just three or four years. Keep female calves to replace their wasted mothers. Shoot male calves in the head at a day old or kill them later for veal or beef. 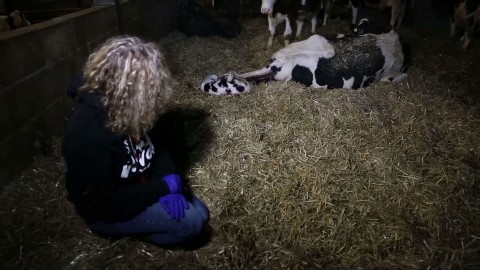 And there was this mother, lowing at the birth of her baby but only seconds later, a farm worker arrived. As he had his back to me, I climbed a gate and hid. That was a close call. On to the next farm…

I had heard that Fairfield farm in South Devon, which makes Aunty Moos ice cream, had calves isolated in hutches. That is not unusual but at four months old, these little girls had been there twice as long as the law recommends. They should have been group housed with other calves at two months old unless a vet had endorsed this protracted solitary confinement.

Four calves stood in their tiny, fenced-off area outside their hutches, thick with mud and excreta. None had water and they could only just turn around so small was the space. I knelt by one and she desperately sucked my fingers.

But there was more to shock me at Fairfield farm. On a wet, filthy, concrete floor we came across a cow who was so ill she couldn’t move, not even lift her head. Her body was wasting away and revealed large sores, both old and new. Her hind legs were shackled, like some dangerous criminal. It is a sad and depressing sight and usually done following nerve damage during birth after which the cow cannot stop herself from constantly doing the splits. The pain and suffering was heartbreaking. We called the RSPCA and a local vet who, to his credit, turned out even though it was about 3am.

He agreed with us that this poor creature was suffering and used his authority to put her out of her misery. It was deeply distressing for all of us.

In the same filthy shed was another cow, unable to stand. This cow was also clearly near the end of her life – but not near enough in the vet’s opinion and so we had to leave her. 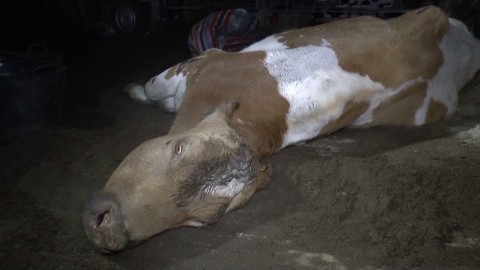 One, just days old, was completely alone – a teetering little thing so vulnerable and so beautiful. She latched on to me for comfort, trying to suckle from my fingers. Her mum was just metres away but this baby would never be allowed to suckle from her, never see her again. Is a chocolate bar worth this suffering?

At an Arla farm in Taunton, Somerset, the calves were again isolated in hutches. Arla is the fourth-largest dairy company in the world whose brands include Anchor butter and Cravendale.

To add to the anguish that all dairy mums experience, yet more torment is being added as the industry industrialises. A large farm I investigated in South Devon never allows the cows to graze – never! In a previous Viva! investigation of Cadbury, all 15 farms we visited zero-grazed. For zero-grazing animals, the result is increased lameness, mastitis, bacterial infections and depression, according to the European Food Safety Authority.

Everywhere Viva! points the camera on Britain’s dairy farms we find depression, desolation, deprivation and pain. Dairy farming is an abject abuse of motherhood and whatever aspect of it moves you, please tell your friends and family about it. This is British dairy farming, this is a war on animals. Thanks partly to our work, dairy sales are falling rapidly and at some point in the future we will look back on today’s abuse with horror. Help to bring that day closer. Going vegan is a positive and powerful solution – it’s the only solution!

(We reported both Halswell and Fairfield farms to the government’s Animal & Plant Health Agency, asking for instant action. As usual, we have heard nothing). 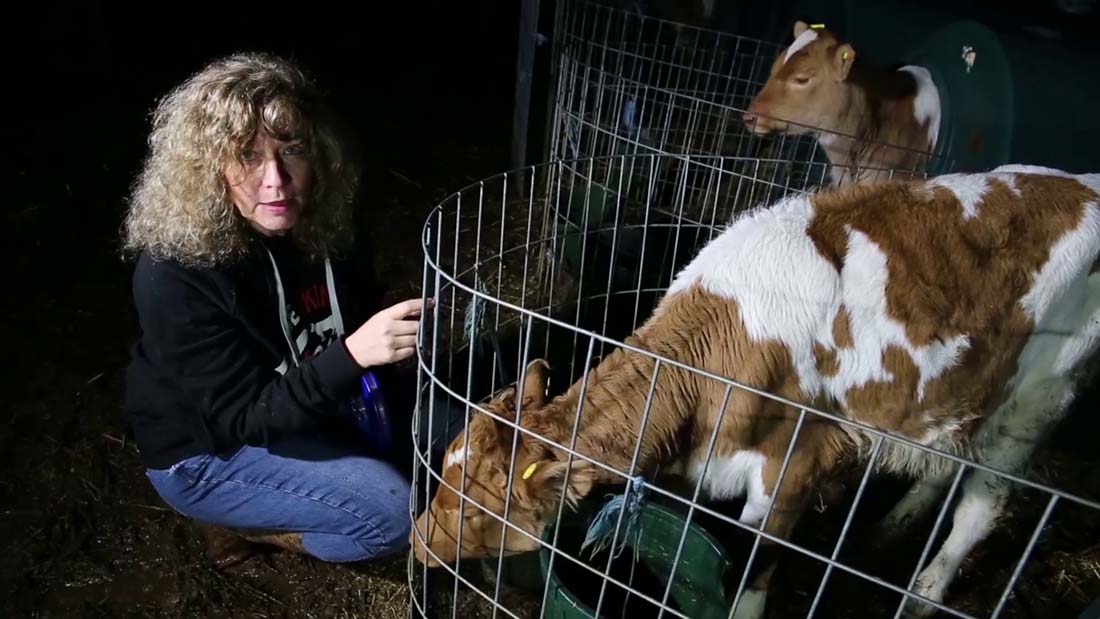 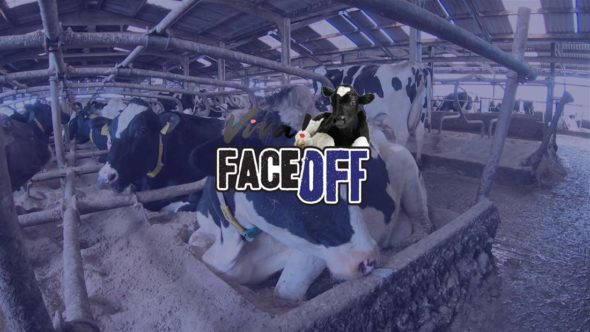 You won’t believe what is going on in our country’s factory farms! Will you take this challenge too? Can you face off against the British dairy industry?