In 2013 the culling of badgers in two areas of England, Gloucestershire and Somerset, began in a flawed attempt to control the spread of Bovine TB amongst dairy cows. Over the last seven years, culling has spread across the UK and tens of thousands of badgers have lost their lives. Despite promises in 2020 to phase out the cull, badgers are still being killed in their thousands across the UK.

Viva! has been opposed to the cull since its inception. The science just doesn’t support it and badgers should not be needlessly dying to protect an unnecessary and cruel dairy industry. 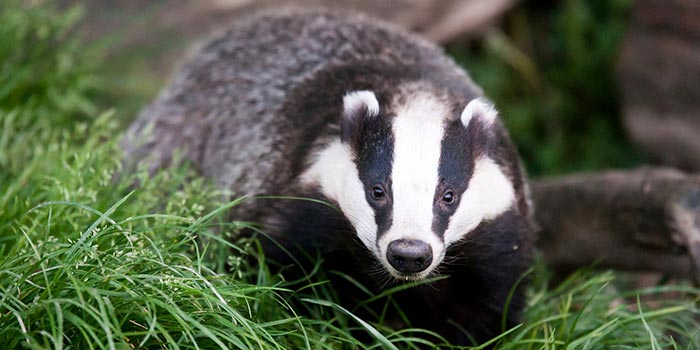 This page details Viva!’s campaign history. Head to Viva! Animals for the most up-to-date information about the badger cull and bovine TB.

Take me to the badgers page » 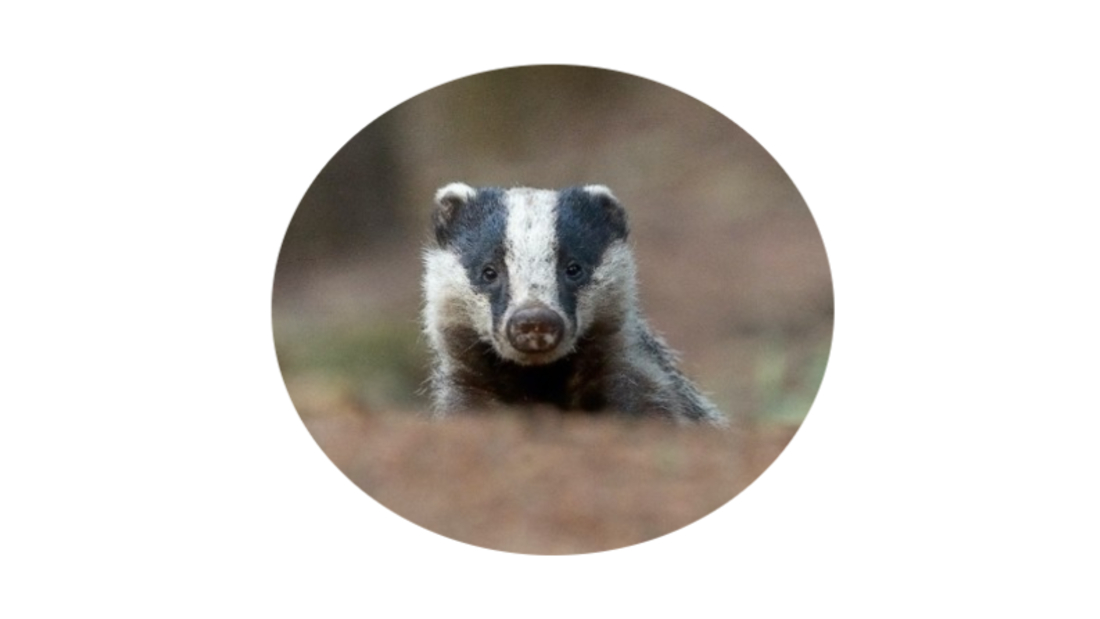 Badgers and Bovine TB: A Viva! report by Justin Kerswell

Bovine TB (bTB) is an infectious and contagious disease of cattle caused by the bacterium Mycobacterium bovis. Although the main reservoir and natural host of M. bovis is cattle, humans and a wide range of mammals, including badgers and deer, are susceptible to it. However, badgers are often – and wrongly – blamed for playing a large part in the spread of bTB in cattle and are under threat of mass ‘culling’ in parts of Britain. 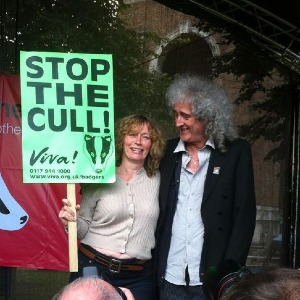 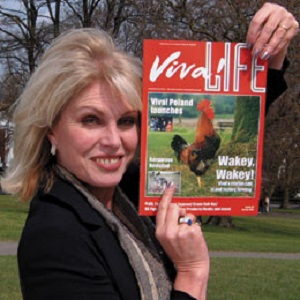 “We must not make badgers scapegoats for bovine TB.”

Minister John Griffiths announced that Wales will not kill badgers as part of its policy to tackle cattle bTB. Instead Wales is implementing a policy of vaccinating badgers. He says: “This is the right thing to do and the right course of action.”

Viva! congratulated Mr Griffiths for his political strength and not being bullied into persecuting Welsh wildlife because of the failings of farmers. 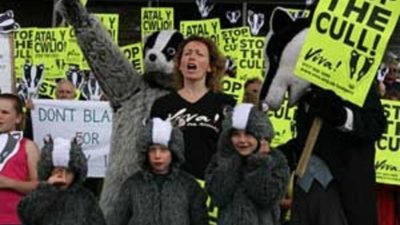 We also want to say thank you to you, as without the constant public pressure this decision could have been very different.

Almost four years ago Viva! held the first national rally for badgers outside the Welsh Assembly.

We’ve saved badgers together – thank you!

We have long suspected that Biosecurity failings at markets plays a much bigger role in spreading the disease than contact with wildlife. Biosecurity measures are put in place to minimise the risk of spreading disease on clothing and foot wear.

In March/April 2011, we filmed at three markets in and around the Intensive Action Area in Wales (where the killing of badgers will take place).

As part of the investigation we uncovered the following:

At Whitland Market there was no biosecurity measures in place as animals were unloaded, even though it was a TB/Red Market where TB infected animals are traded for slaughter

An army of animal lovers called for Welsh politicians to abandon the proposed ‘cull’ in Wales of badgers during Viva!’s Day of Action.

Peaceful support raising activities took place right across Wales, with demos happening in Bridgend, Cardiff, Haverfordwest, Lampeter, Llandysul, Porthmadog, Swansea, Wrexham (and more – with further ones in England, too). Hundreds of other people spread the word by door-dropping our leaflets and encouraging people to contact the Welsh minister for Rural Affairs, Elin Jones. We are asking her to take action now before animals start dying in this misguided attempt to control bovine TB.

Local supporter, Judi Hewitt, of North Wales Animal Rights took to the streets in Mold. She was pleasantly surprised by the positive reaction: “As we approached this old market town, I remember telling my companions, ‘Ah well, we’re going straight into the lions den..’ How wrong I was; such lovely people, and not a single nasty verbal attack! Not even from a young farmer who came over to talk to us; eager to let us know, that although he disagreed with us, he wasn’t happy about badgers being killed.”.

There were several demos in Cardiff. Viva! held one in the centre and we were delighted by the reaction of the public, who queued up to sign our petition. They were horrified at the thought of badgers being killed to appease farmers. They were even more outraged to hear that the proposed ‘cull’ is a fool’s errand, and will do nothing to control the disease and will cost countless animal lives.

Viva!’s campaigns Manager, Justin Kerswell told reporters: “Badgers are scapegoats for bad farming practices and government failure. In their eagerness to blame anyone but themselves for the bovine TB epidemic, Welsh farmers and politicians are targeting wildlife when they should be looking closer to home. The simple truth is that dairy cows are vastly overworked and vulnerable to infection, suffering the dual burden of pregnancy and lactation during much of their lives. Add to this mass cattle movements and unreliable testing you start to see the real causes of the problem.

“A ‘cull’ of badgers in Wales will decimate wildlife, cost a huge amount of taxpayers’ money and achieve nothing. It is quite incredible that the Welsh Assembly simply ignored the available science in the rush to pacify dairy farmers.

“We not only call on Elin Jones to reverse the decision but are calling on consumers to reject meat and dairy – the very things that are driving this problem.” Calls made for badger cull U-turn

Animal campaigners have gathered across Wales in a series of protests to force the assembly government to rule out its planned badger cull.

A huge thank you to everyone who attended Viva!’s National Rally for the Badgers on Saturday, June 28, 2008. The response was overwhelming, with over 300 people gathering on the steps of the Welsh Assembly’s Debating Rooms. The message was resounding and echoed right across Cardiff Bay – No badger ‘cull’ in Wales (or anywhere else in the UK for that matter!).

Badgers descended on Cardiff Bay in their hundreds. A mother and father ‘badger’ were joined by children dressed as baby badgers. Surrounding them were hundreds of animal and wildlife lovers from across Wales and the rest of the UK. All were wearing eye-catching badger masks and holding dual-language signs saying ‘Stop the cull!’ and ‘Atal Y Cwlio!’.

The peaceful protestors were calling on Elin Jones (Minister for Welsh Rural Affairs) to act on the available science and cancel the cull.

Messages were read out from sympathetic politicians, including Lorraine Barrett AM, as well as celebrities such as Wendy Turner-Webster, Joanna Lumley, Rose Elliot, Jenny Seagrove and Benjamin Zephaniah.

During the Rally peaceful protestors handed out Viva! leaflets, showing the public that that the proposed cull of badgers will be an animal welfare disaster of immense proportions that will do nothing to solve the problem of TB in cattle (bovine TB – bTB) in Wales – it may even make it worse.

Viva!’s director and Welsh resident, Juliet Gellatley, spoke at the rally and told protestors: “In their eagerness to blame anyone but themselves for the bovine TB epidemic, farmers are targeting wildlife when they should be looking closer to home.

“The rush to intensify animal agriculture has led to this disastrous situation. Dairy cows suffer the dual burden of pregnancy and lactation during much of their lives. Their immune systems are shot to pieces and they are physically exhausted and killed after just two or three lactations, at four or five years old. Add to this unreliable bTB testing that is inaccurate in one-third of cases and you start to see the real causes of the problem.

“A cull of badgers in Wales will decimate wildlife, cost a huge amount of taxpayer’s money and achieve nothing. It is quite incredible that the Welsh Assembly simply ignored the available science in its rush to mollify dairy farming’s Neanderthal tendency.

“We not only call on Ms Jones to reverse the decision but are calling on consumers to reject meat and dairy – the very things that are driving this problem.”

After the Rally, we took the protest to the streets and marched back to a nearby hotel, where the talks continued and we discussed how to move the campaign forward and achieve our ultimate aim – stop the massacre of badgers both in Wales. 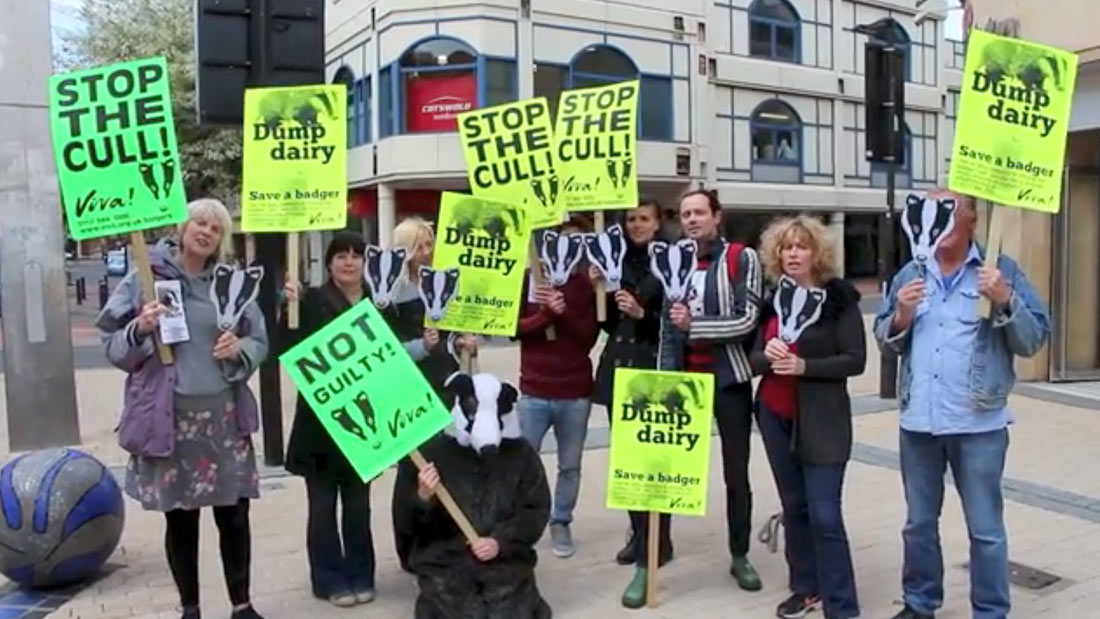 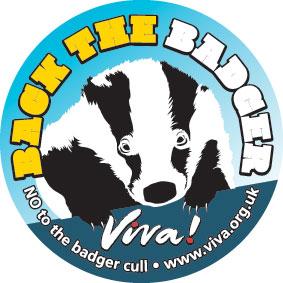 Back the Badger Window Sticker

Say no to the badger cull with our self-cling window sticker – so you can show-off this cutie anywhere.