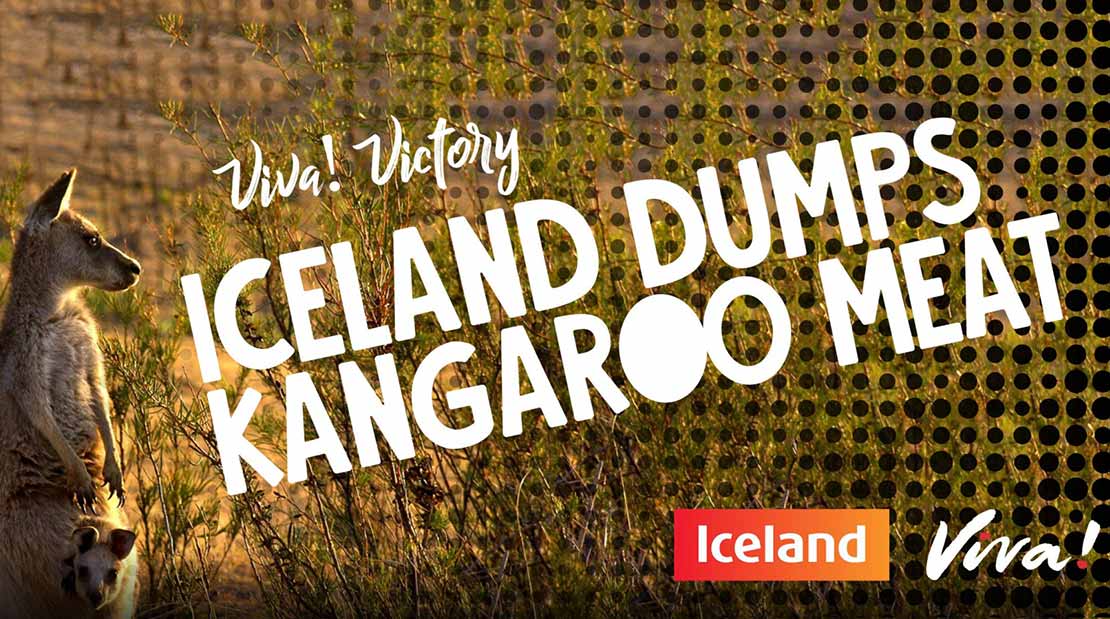 Before we embark on our 25th year of operations at Viva! let’s take a look at our achievements over the last 12 months, for animals, our health and the planet – all thanks to your support!

We kicked off 2018 with a couple of Viva! victories in our long-standing campaign against the sale of kangaroo meat in UK supermarkets. For years Iceland and Lidl have dug their heels in, marketing the ‘exotic meat’ as ‘just a bit of fun’ but finally they conceded and confirmed the removal of sales nationwide. For the first time ever we’re able to say that ALL British supermarkets are now kangaroo meat-free.

These successes were followed up with Pets At Home dropping sales of dog-treats containing kangaroo meat and Bristol-based gourmet burger chain – The Burger Joint – removing kangaroo burgers from their menu.

In June Viva! also hosted the premier of a stunning new film called Kangaroo – A Love Hate Story, revealing shocking scenes behind the largest mass destruction of wildlife in the world. I attended both the Bristol and London screenings to participate in a Q&A with the film-makers.

The main focus for the Viva! Campaigns team during 2018 has been the relaunch of our Scary Dairy campaign, to expose the cruelty and suffering behind every glass of milk or slice of cheese.

In March we released our biggest UK dairy exposé to date in a Daily Mail exclusive and published undercover footage, filmed by investigators for Viva! Campaigns, on farms supplying some of the country’s biggest brand names – Cadbury, Arla (Cravendale, Lurpak, Anchor) and M&S.

The investigation was followed by MooFree May – a month of online calls to action and five Street Action Events, from London to Edinburgh, to show the public how delicious a dairy-free diet can be – and Door Drop June, where we called on Viva! supporters to distribute our brand new ‘Goodbye Baby’ leaflets. 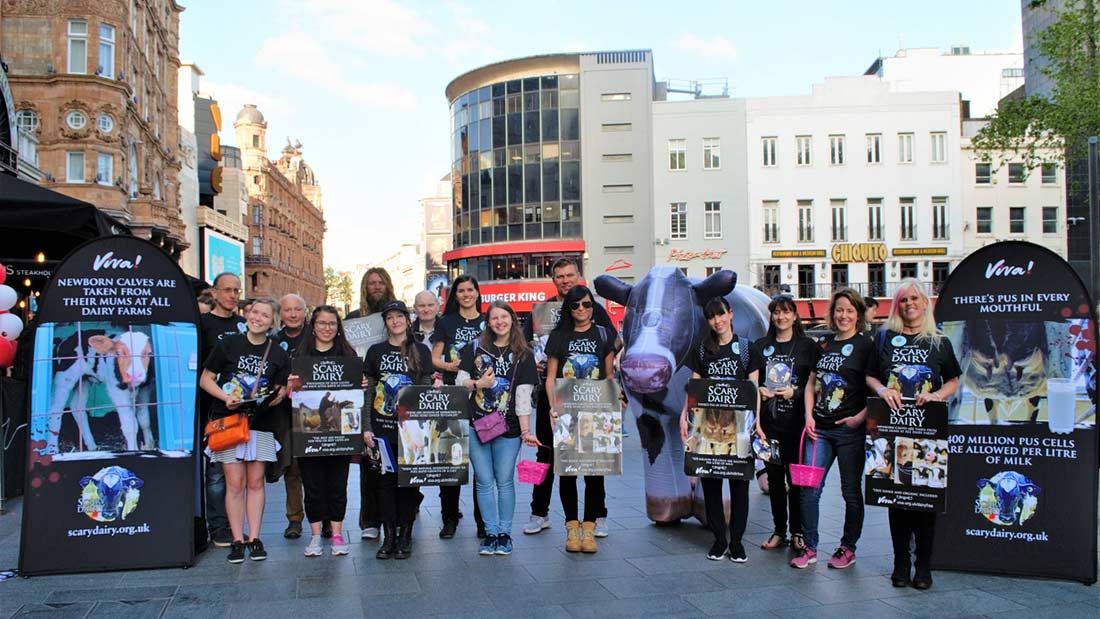 With summer on the horizon we wanted to continue our positive outreach by taking the UK’s first vegan ice cream van to seven British towns. Our Viva!licious tour hit Cardiff, Blackpool, Leeds, Southend-on-Sea, Margate, Brighton and Camden High Street, where the Viva! crew handed out complimentary dairy-free ice cream from our spectacular vegan ice cream truck, wrapped in an eye-catching design to promote the dairy-free message. We encouraged the public to opt for plant-based alternatives and distributed free information about dairy-free diets alongside our giant inflatable cow!

A personal highlight of 2018 for me has been Viva!’s collaboration with Lisa James Animal Sanctuary to rescue two pregnant dairy cows – aptly named Thelma and Louise following a naming competition.

We heard that a dairy farm was closing and managed to save two gentle, wonderful mums-to-be destined for slaughter after having their babies taken within 48 hours after birth. Along with Veronika Powell, Viva! senior campaigner, I drove to the farm and was mightily relieved to get the two cows on board to freedom.

The cows were driven into their new home at Lisa James Sanctuary – a true haven for rescued farmed animals – and it was exhilarating to see them run out of the truck into their forever home.

Since the rescue both Thelma and Louise have given birth to the most beautiful baby boys, who would have likely been shot shortly after birth as a useless by-product of the dairy industry. 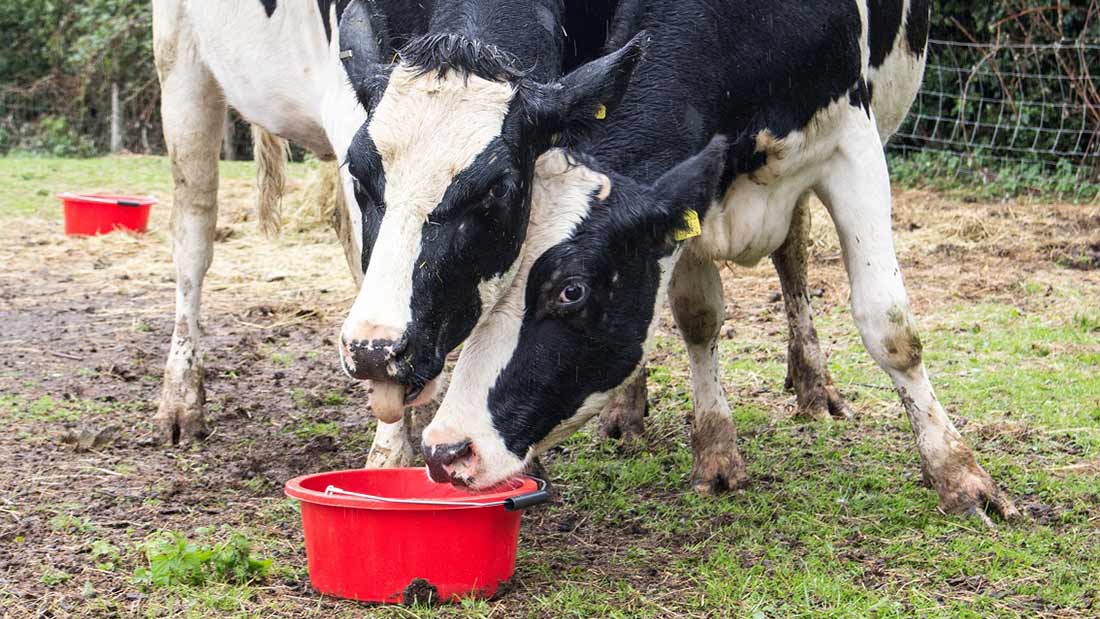 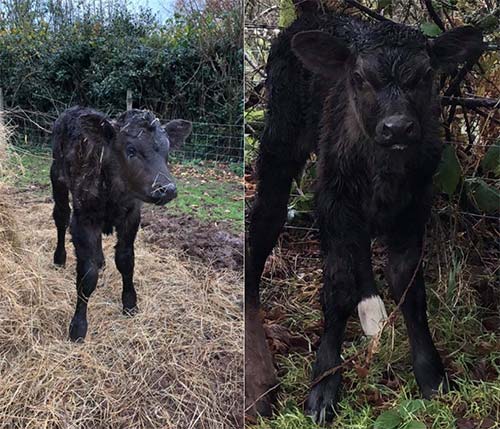 Like with the naming of Thelma and Louise we ran two competitions to name the calves and selected Charlie Enfys (meaning free man and rainbow to symbolise this new beginning) and Tomas (Tommy) Two Sox (in keeping with his Welsh roots as the family live in a Pembrokeshire).

There’ll be lots more updates about Thelma and Louise in the coming months and their well-being will continue to feature heavily throughout 2019. Keep an eye on all the updates by following along with our Latest Moos.

After months of hard-work, in October we launched our brand new Scary Dairy website – for all you need to know about dairy and going dairy-free – and embarked on an ambitious month of action to raise awareness about the forgotten victims of the dairy industry… male calves. 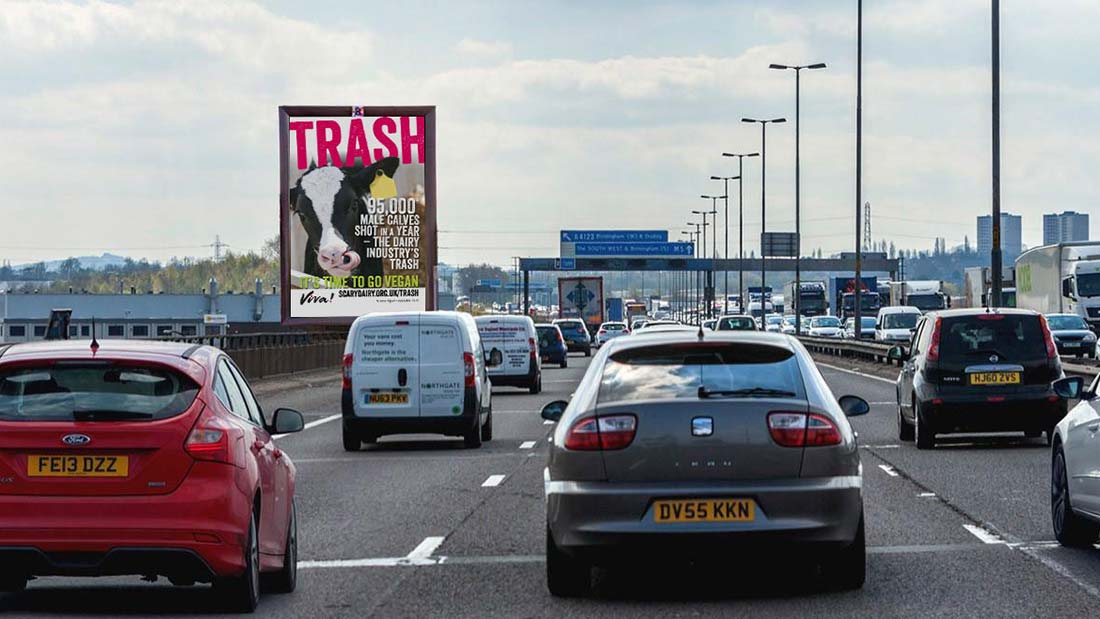 As part of our TRASH campaign we positioned two giant billboards on a busy stretch of the M5, featuring young calves alongside the text “95,000 male calves shot in a year – the dairy industry’s trash”. Standing at a giant 7.5m high the billboards targeted commuters traveling both northbound and southbound near Birmingham, reaching an estimated 1.6 million people over a two week period, before shifting to London to reach a further 7.1 million people.

In addition to the billboards we also commissioned the UK’s first ever vegan YouTube advert.

The short emotive video received an average view-through-rate (the percentage of people who watch the ad all the way through) of 28 per cent, which is almost double the typical VTR for YouTube advertisements! By the end of 2018 about 100,000 people had chosen to watch the entire 40 sec ad.

After a tip-off we received in 2017, myself and investigators for Viva! Campaigns visited a giant pig farm in Warwickshire, which I’m sure you’ll all remember. It is called Hogwood and remains one of the worst places I have ever seen. At the start of 2018 we handed in 49,471 signatures to the Animal and Plant Health Agency from those of you that agreed. And two exclusives were placed in the Sunday Mirror.

All our findings had previously been reported to not just the relevant government bodies but also the RSPCA, Red Tractor, Trading Standards and Tesco (who the farm supplies). Due to a lack of action on their part we were left with no choice but to revisit the farm ourselves to test Tesco’s claim that they’d ‘work with the supplier to improve conditions’. 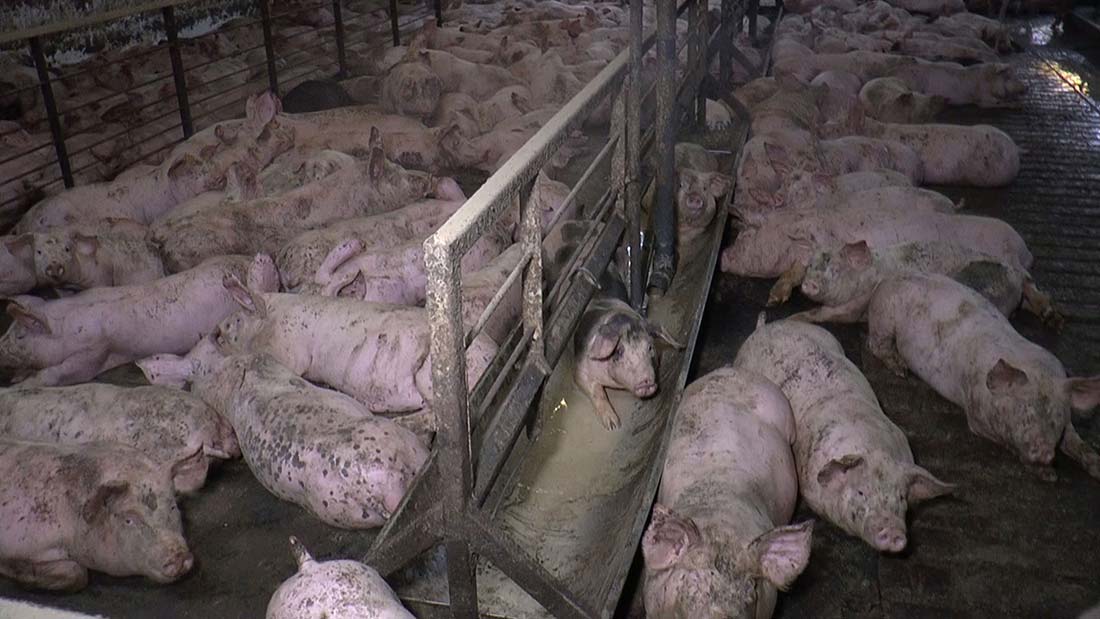 On 5 July 2018 investigators for Viva! Campaigns walked with trepidation into the same shed, down the same corridor and opened the same door. Like me, what they found shook them to their very core.

Details of the new investigation were released in another Daily Mail exclusive and kick-started nationwide action – door dropping our updated Hogwood Horror Farm leaflets, monthly vigils outside Hogwood Farm itself, a Day of Action outside more than 150 Tesco stores across the country, overwhelming numbers of social sharing with the #HogwoodPigs tag and a second Day of Action featuring a giant video van. We also attended a high profile industry event to hand over more than 77,000 signatures to top Tesco executives calling for Tesco to drop Hogwood Farm as a supplier once and for all. 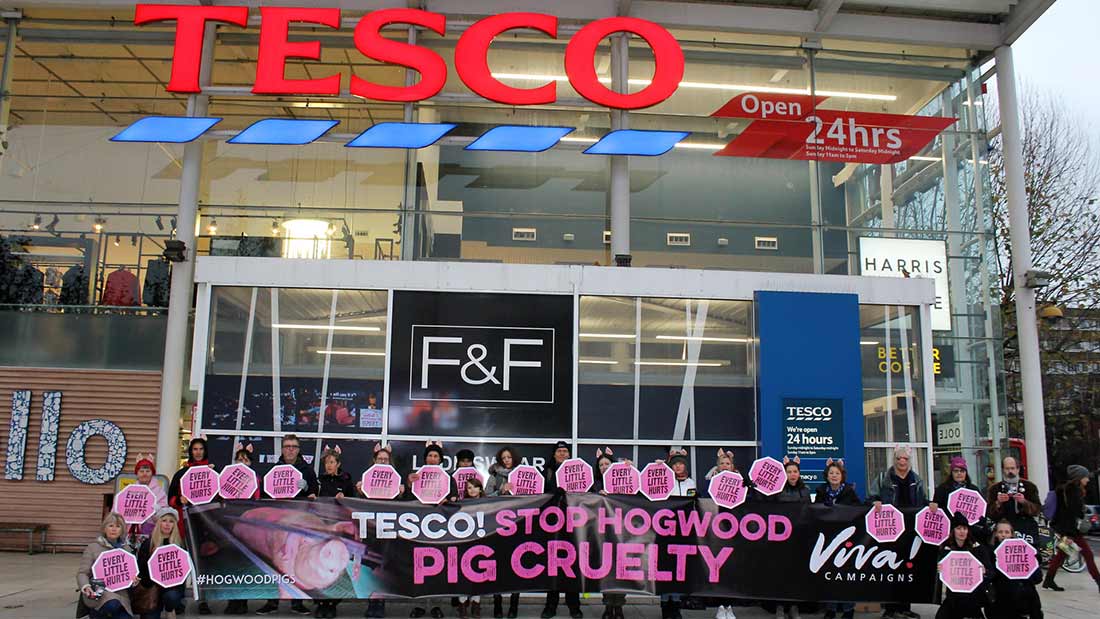 Yet it hasn’t all been bad news for pigs!

In February we announced the closure of Lambrook pig unit – a hell hole pig farm investigated for Viva! in 2017 that was found to be pumping slurry to a nearby green power plant to convert into biogas for the Good Energy company. Our Hope cinema ad was also back in the news after the Advertising Standards Authority (ASA) ruled in favour of the National Pig Association, who unsurprisingly complained our advert was misleading. This was because we implied that the ‘vast majority of pigs farmed in the UK are restricted to the indoors and never experience the outdoors’.

We provided sufficient evidence to support the claim, which included calculations on which we based the 90 per cent figure used in the advert. While the ASA did acknowledge that 96 per cent of piglets are, in fact farmed intensively, moving indoors after weaning at three weeks old, they considered it untrue to say that they would never experience life outside, although none of those piglets would experience the type of freedom shown in our advert. We slightly adapted the ad and it is being shown by other groups in various other countries.

To close off the year the Viva! Campaigns team called for consumers to bring peace to all during the festive season with a new turkey door dropper leaflet, undercover investigations video and Street Action Events in Southampton, Leicester and Swansea. In the news and on the air

Our media coverage continues to grow as the years roll by and 2018 was no different. Memorable radios include debating veganism with Antony Worrell Thompson on BBC Radio Manchester, a debate on the damage meat and damage cause to the environment on BBC Radio 4, and I conducted 16 back-to-back interviews on the launch of our TRASH campaign in October on the BBC and many others.

The Viva!Health team remained incredibly busy debunking ‘Fake News’ and promoting the vegan health message with an extensive array of articles and features, while Tony Wardle, Viva! associate director and Viva!life editor, pumped out featured content for our Viva!life supporter magazine. Issues 67, 68 and 69 all hit the doorsteps in 2018 spotlighting ocean vandals, death by chocolate and the rescue of Thelma and Louise.

In the world of podcasting I interviewed Evanna Lynch (of Harry Potter fame) and appeared on her increasingly-popular ChickPeeps Podcast. We’re also keeping our voice as loud as ever over on the Viva!Podcast, hosted by Kris Townsend. 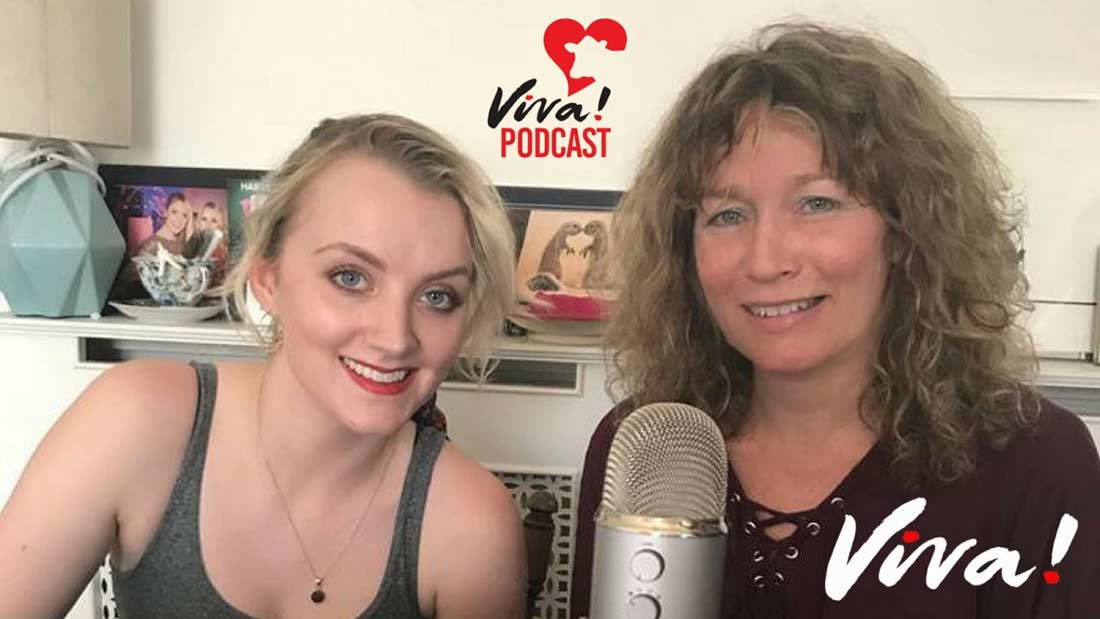 Veganism on the rise 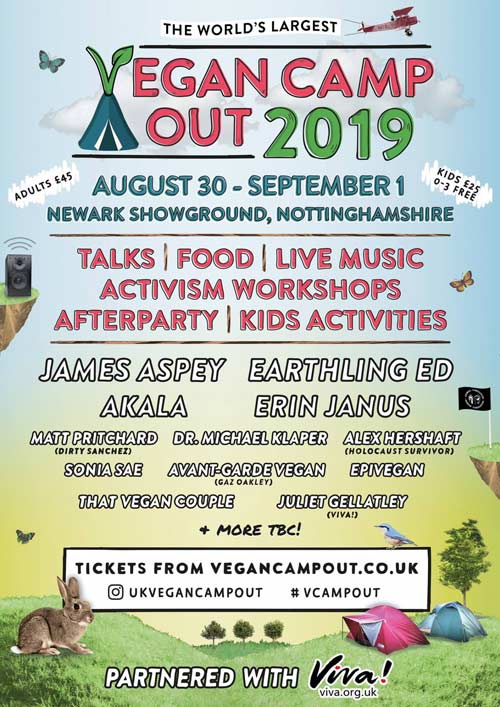 We saw many giant food firms clambering onto the vegan bandwagon this year with many supermarkets launching their new plant-based food ranges, thanks to the increased demand of consumers opting for compassionate food choices.

To support these transitions into veganism in 2018 we launched our Vegan Recipe Club and 30 Day Vegan mobile apps, a series of new recipe guides by our food and cookery manager (Christmas, Winter and Going Dairy-Free), a free online vegan directory – My Vegan Town – and hosted another eight Viva! Vegan Festivals.

In 2019 we’ll continue to support Vegan Camp Out and I’m delighted to return to the line-up!

The rise of veganism is also very much evident on the health front with two plant-based medical conferences held in 2018. Our team went along to both events to provide support with our extensive range of reports, guides, factsheets and leaflets. 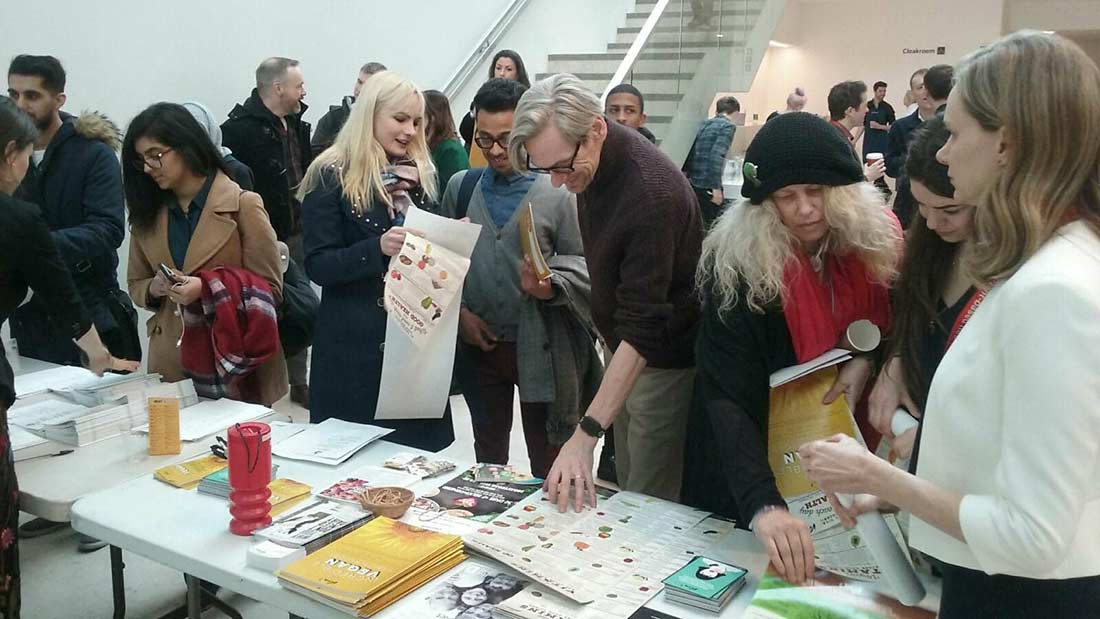 To make it much easier to get to grips with nutrient jargon and provide all the information you need to ensure your vegan diet is a healthy one Viva!Health senior researcher, Justine Butler, and senior campaigner, Veronika Powell, released a comprehensive A-Z of nutrients. Find out if bananas really are a great source of potassium and why Popeye loved spinach so much (the answer is not what most people think!). We also published new Protein, Iron and Calcium wallcharts and published the first four of a series of new mini fact sheets (heart health, vitamin B12, fat and iron).

And finally… not only did the Viva!Health team have to defend Viva!’s anti-dairy ads, due to issues over the wording of ‘linking’ dairy to cancer and the number of hormones present (even though that is the word scientists use!), but they also exposed a porky pie shocker, as the ASA decided not to uphold complaints against the Agriculture and Horticulture Development Board’s adverts describing pork medallions as low in fat.

Without your support none of the above would have been possible and so our achievements are your achievements! As ever we thank you all for everything you do to help Viva! and our campaigns. 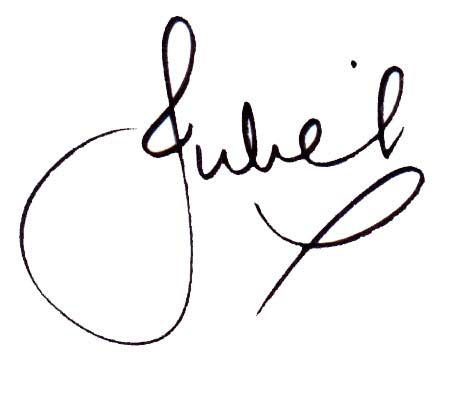